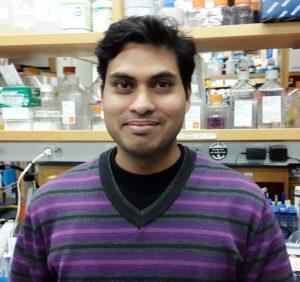 Rajesh took time out to chat with the Immunopaedia team about his work in HIV immunogen design and where that field is headed.

What would an effective immunogen require to elicit protection against HIV infection? In the natural HIV infection, the host immune responses fail to eradicate the virus mainly because the virus is highly mutable and constantly change the epitopes that are the targets of immune response. In addition to this powerful mechanism, the Env glycoprotein (gp160), which is the major target of neutralizing antibodies (NAbs), has got multiple ways to evade the recognition by NAbs such as dense glycosylation and conformational masking. Only broadly neutralizing antibodies can succeed to penetrate through and bind to the moving targets on Env protein. The immunogen(s), to be an effective vaccine, should elicit broadly neutralizing antibodies (bNAbs) capable of preventing the new infections.

What is the best way to test how effective potential immunogens are against HIV acquisition? The efficacy of the immunogens can be tested in the animal models in the pre-clinical studies. In the animal models we have non-human primates or humanized mice that are modified to have the human immune system. In non-human primates, we need to use Simian/human immunodeficiency virus (SHIV) which is a modified form of SIV having env gene of HIV adapted for the infection of the cells in this animal model. In the latter, we can evaluate the vaccine efficacy or efficacy of any therapy, say bNAbs, by its ability to prevent the infection by the challenge HIV-1. Both the animal models have pros and cons but so far this is the best way to test the potential immunogens if they are to be directly tested for the preventive efficacy. We can use other animal models including but not limited to rabbits or guinea pigs to test immunogens for their ability to induce the immune responses as correlate of protection.

How does your research contribute to HIV immunogen design? My research is focused on the development and evaluation of Env based immunogens designated as SOSIP trimers. These are the new generation immunogens that mimic the native Env trimer structure and can be expressed as extracellular recombinant proteins. The immunogenicity studies showed that these immunogens do elicit the neutralizing antibodies (NAbs) against the autologous tier-2 virus. The current focus is on the understanding of the targets of these vaccine elicited NAbs and how to broaden this response to heterologous tier-2 viruses.