The IUIS Webinar Series was established at the beginning of 2020 as an online education programme with the aim to provide individuals from all around the world the opportunity to gain comprehensive knowledge on the latest COVID-19 research developments without the need of travelling in these uncertain times. This first series was a tremendous success: internationally-acclaimed speakers shared their insights and latest research results on COVID-19-related topics in 20 webinars that welcomed more than 8,800 scientists from 86 countries.

For its second series, IUIS, in partnership with Immunopaedia and Frontiers, will broaden the scope to cover a variety of hot topics in immunological research such as Autoimmunity, Infectious Diseases and Allergology.

Regulatory B cells and gut-microbiota: an intricate acting balance in autoimmunity 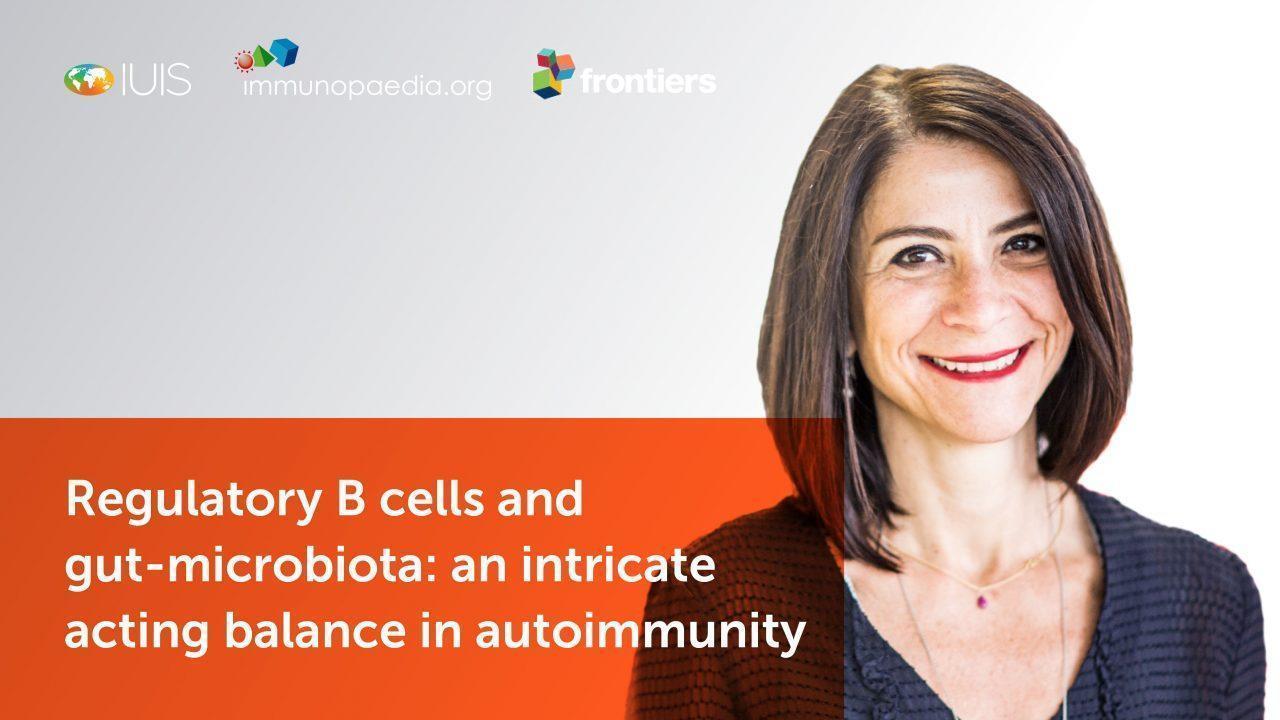 Regulatory B cells (Bregs) are immunosuppressive cells that contribute to the maintenance of immunological tolerance (Mauri and Bosma, 2012). Bregs suppress a variety of immune pathologies including autoimmune diseases through the produc- tion of interleukin (IL)-10, IL-35, and transforming growth factor beta 1 (TGFb1) (Mauri and Bosma, 2012). They inhibit the expan- sion of pathogenic T cells and other pro-inflammatory lymphocytes, and promote regulatory T cell (Treg) differentiation (Carter et al., 2011; Rosser et al., 2014). Toll-like receptor (TLR) agonists, including lipopolysaccharide (TLR4) and CpG oligo-deoxynucleotides (TLR9), in combination with low grade levels of inflammatory cytokines, for example IFNa and/or IL-1b and IL-6, induce IL-10-producing Breg differentiation (Lampropoulou et al., 2008; Menon et al., 2016; Rosser et al., 2014). The strength of these inflammatory signals is key in determining whether immature B cells develop into Bregs or into mature B cells and antibody-producing plasma cells (Menon et al., 2016). We have recently shown that low-grade inflammatory sig- nals that drive the differentiation of immature B cells into Bregs are provided in the gut-associated lymphoid tissue (GALT) as a result of the interaction between the gut microbiota and the innate immune system (Rosser et al., 2014). Mice depleted of endogenous bacteria following administration of broad-spectrum antibiotics do not develop arthritis or Bregs, suggesting an intricate relationship between microbiota, inflammation, and Breg differentiation (Rosser et al., 2014). The question of whether inflammatory signals produced in response to the microbiota control Breg development alone or whether microbial factors also play a direct role remains unanswered. We will discuss how  butyrate supplementation suppresses arthritis in a Breg-dependent manner by increasing the level of the serotonin-derived metabolite 5-Hydroxyindole-3-acetic acid (5-HIAA), which activates the aryl-hydrocarbon receptor (AhR), a newly discovered transcriptional marker for Breg function.