Fireworks of autoimmunity from birth

A five-month-old male infant was brought into the emergency department by parents with hypotonicity (reduced muscular tone) and drowsiness that began the evening before. The infant presented with refractory atopic dermatitis and recent weight loss.

Keran was born at 39 weeks since the LMP (last menstrual period) (weight 3.2 kg). Fifteen days after birth, he developed an eczematous rash on his face which was diagnosed as atopic dermatitis. Local application of hydrocortisone partly improved the cutaneous lesions. His parents report the onset of chronic diarrhoea since the age of two months.

The number of diapers used daily has significantly increased in the last few days due to polyuria (excessive excretion of urine). On the morning of presenting to the clinic Keran was unusually sleepy and unable to breastfeed. He was pale and hypotonic. 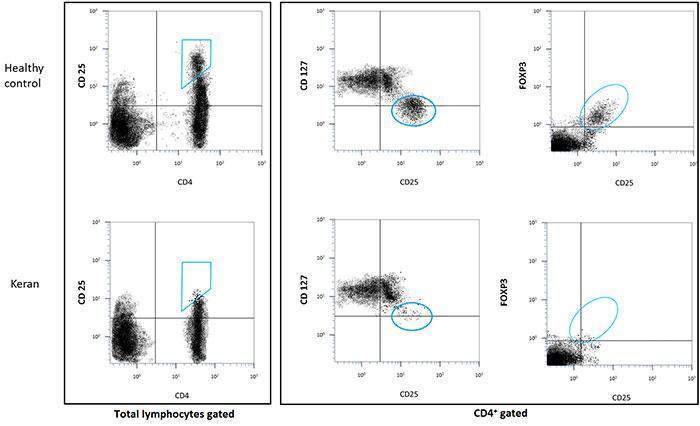 Keran was successively diagnosed with atopic dermatitis, insulin-dependent diabetes mellitus, villous atrophy (flattening and disappearance of the finger-like absorptive processes of the small intestine) and autoimmune haemolytic anaemia. Additionally, hyper-IgE and history of a deceased brother at 2-months of age from autoimmune conditions and enteropathy, are evocative of IPEX syndrome (immune dysregulation, polyendocrinopathy, enteropathy X-linked).

Biological tests confirmed this diagnosis with:

IPEX disease is a very rare X-linked poly-autoimmune syndrome due to mutations in the gene encoding for the transcription factor FOXP3, which is essential for the development and function of Treg, the pillar cells of peripheral immune tolerance. A failure in central or peripheral immune tolerance has severe consequences on homeostasis of the immune system, as illustrated by Keran’s disease.

The immune system maintains integrity of the body by, notably, recognising pathogens and eliminating them or controlling their growth. For this, it has to distinguish dangerous organisms (typically pathogens but also abnormal or cancer cells) from innocuous antigens (typically self, alimentary or harmless environmental antigens). Indeed, the immune system faces many inoffensive foreign antigens throughout life (for eg. aerial antigens in lung, surface antigens on skin, alimentary antigens and microbiota within gut). In a way, the body itself is a universe of self-antigens. An aggressive B or T cell response against such innocuous antigens may lead to an autoimmune or allergic disease.

During their development, B and T cell precursors stochastically generate unique receptors for antigens, i.e. BCRs and TCRs, whose spectrum of recognition covers an extremely broad array of molecules. This is a fascinating aspect of the adaptive immune system which is poised to generate a considerable repertoire of receptor specificities from a limited set of genes, i.e. immunoglobulin and TCR gene loci. During this process, random molecular mechanisms generate clonal specificities directed against self-antigens among many others. It should be kept in mind that self-reactivity is a normal, physiological phenomenon: autoreactive T cells and autoantibodies are naturally present at varied levels within the immune system but are controlled by different safety checkpoints, a process referred to as ‘immunological tolerance’.

Several mechanisms participate in the prevention of undesirable responses of the adaptive immune system.

Natural Tregs are generated by the thymus while induced Tregs differentiate from conventional T cells after activation in the periphery. Tregs were initially characterised in the mouse by their constitutive surface expression of CD25, the alpha chain of the interleukin-2 receptor. Yet, expression of CD25 is not Treg-specific since conventional T cells also transiently express CD25 after activation. In humans, Tregs were initially characterised by a higher level of CD25 expression (CD4+ CD25hi) than conventional CD4+ CD25+ activated T cells. Another phenotypic characteristic is their low level of CD127 expression (CD4+ CD25+ CD127-/lo). Importantly, they specifically express the transcription factor FOXP3 which is essential for their differentiation and function. This is an intracellular molecule whose staining necessitates cell permeabilisation to evaluate the frequency of CD4+ CD25+ FOXP3+ cells.

Tregs use many different mechanisms to regulate immunity such as T-cell deprivation of interleukin-2 (by binding to highly-expressed CD25), production of inhibitory cytokines (such as IL-10, TGF-β, IL-35) or other soluble mediators (such as adenosine), down-regulation of dendritic cell functions (such as CTLA-4 mediated blocking of dendritic cell costimulatory ligands, i.e. CD80 and CD86) or even cell killing. 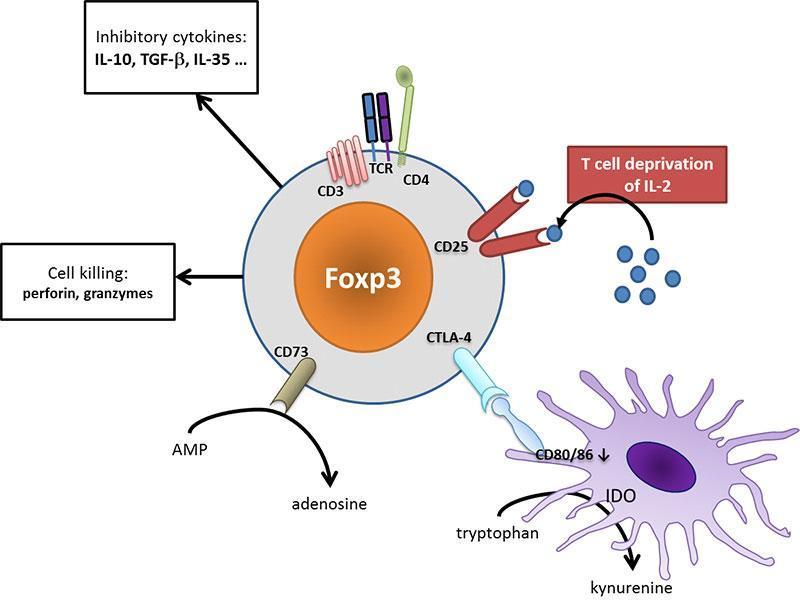 To fight against and cope with a versatile and changing antigenic world (even ‘self’ changes with age, puberty, environment), adaptive immune systems have developed unique biological mechanisms for the generation of repertoire diversity (like somatic mutations that override the basic laws of genetics such as the conservative replication of DNA) and subsequent regulatory pathways. Keran’s clinical case illustrates the importance of peripheral tolerance since the lack of Tregs is lethal in the absence of therapy. The absence leads to unleashed activation of autoreactive responses with the contemporaneous occurrence (occurring in the same period of time) of several autoimmune diseases. The IPEX syndrome also illustrates that central deletion is not sufficient to prevent autoimmunity because Tregs are indispensable, in particular in the gut environment where most antigens are exogenous and cannot be tolerated by central mechanisms. Similarly, APS-1/APECED syndrome in which central deletion is severely impaired teaches us that Tregs alone are not sufficient to control autoreactive T cells when central tolerance is defective.

The milestones of Tregs and FOXP3 discovery

The existence of a population of suppressive cells (now known as Tregs) was suspected for a long time, before Tregs could be characterized phenotypically. For instance, when thymectomy (surgical removal of the thymus) is performed before day 3 of life, mice develop several autoimmune disorders, demonstrating that autoreactive T cells are produced at (and even before) birth. In contrast, when thymectomy is performed after day 3, mice grow normally without signs of autoimmunity, demonstrating that suppressive cells are produced from day 3 on. The latter control the activity of the former.

In 1995, Sakaguchi et al. demonstrated that transfer of CD4+CD25– T cells to an alymphocytic host provokes multiple spontaneous autoimmune diseases that can be prevented by addback of CD25+ cells. This experiment: (1) confirms that a normal repertoire (the donor has no autoimmune disease) physiologically contains autoreactive T cells; (2) demonstrates that CD4+CD25+ T cells represent a population of naturally occurring Tregs that control the activity of autoreactive T cells, and (3) suggests that Treg transfer might be used for therapy of autoimmune diseases (Sakaguchi et al., 1995).

IPEX was described in 1982 in a large family with 19 affected males across five generations, as a lethal X-linked disease (Powell et al., 1982). Then, Chatila et al. identified mutations in two unrelated patients with IPEX syndrome (Chatila et al., 2000). The IPEX syndrome was found to be the human equivalent of the Scurfy phenotype, a mouse model of lymphoproliferation (enlarged spleen and nodes) and autoimmunity. These mice have a 2-base pair insertion in a gene they named Scurfin, resulting in a truncated FOXP3 protein. At the same time, two teams independently established that FOXP3 was the human homolog of the mouse Scurfin gene encoding FOXP3 (Bennett et al., 2001; Wildin et al., 2001). Since it was not known yet that FOXP3 was specifically expressed by Tregs, authors suspected that the genetic defect caused hyperactivation of autoreactive T cells rather than a defect in regulation. To date, more than 70 mutations spanning the whole FOXP3 gene have been identified in IPEX patients.

In 2003, Sakaguchi et al. discovered that FOXP3 is selectively expressed by Tregs, and that its transduction confers regulatory phenotype and properties to conventional (non regulatory) T cells (Hori et al., 2003). The central role of FOXP3 in Tregs was subsequently confirmed by invalidation of the FOXP3 gene in mice (Fontenot et al., 2003) that recapitulated the scurfy phenotype with lymphoproliferation and autoimmunity.

In the 2010’s, Tregs started to move to therapy. Many approaches have been considered among which depletion of Tregs to augment T cell reactivity in malignant haemopathies (Maury et al., 2010), or transfer of Tregs to combat GVHD (Brunstein et al., 2011) or autoimmunity (Bluestone et al., 2015). Since low-dose IL-2 was effective in treating type 1 diabetes in NOD mice (Grinberg-Blayer et al., 2010), an alternative to cell therapy is cytokine-mediated in vivo Treg mobilisation (Saadoun et al., 2011 ; Koreth et al., 2011).

Keran immediately benefited from nutritional support and insulin therapy for his autoimmune diabetes. Glucocorticoids were then quickly started in combination with cyclosporine. Atopic dermatitis, insulin-dependent diabetes mellitus, auto-immune enteropathy and autoimmune haemolytic anaemia improved in the first two months of this treatment.

Four months after initiation of immunosuppressive therapy, diarrhoea and dermatitis reappeared, while hypothyroidism was diagnosed. The indication of hematopoietic stem cells transplantation (HSCT) was then considered. One of Keran’s sisters had identical HLA haplotypes and was used as donor.

IPEX is a very rare disorder and therapeutic strategies are still based on the experience of sporadic cases reported in the literature.

The first-line of care for IPEX syndrome is immediate supportive treatment to control the different symptomatic manifestations such as parenteral nutrition for enteropathy (a disease of the intestinal tract), replacement therapy for endocrine disorders, antibiotic-prophylaxis to prevent infectious episodes, haemocomponents for cytopenias (a deficiency of a type of blood cells) or intravenous immunoglobulins for chronic diarrhoea-associated hypogammaglobulinemia (an abnormally low concentration of gamma globulin in the blood and increased risk of infection).

Monotherapy or a combination of immunosuppressive molecules only have partial efficacy, but are recommended to primarily control autoimmune disorders. Glucocorticoids (prednisone and methylprednisolone) are commonly used to limit progression of organ damage (Gambineri et al., 2008). Other immunosuppressive drugs may be combined with glucocorticoids to increase efficacy and to decrease steroid doses. Cyclosporine, tacrolimus and azathioprine are classically added to steroids. Rapamycine is another possibility.

These measures aim to control and stabilize all autoimmune disorders, but the only curative treatment is allogenic HSCT, performed as soon as possible (Baud et al., 2001). Transplantation of autologous FOXP3 gene-modified HSC may represent a perspective for the future.

As an X-linked monogenic disease, the only prevention strategy is to propose neonatal diagnosis to families known to harbour the mutation.

Outcome of patient’s treatment and the resulting physical state

After bone marrow transplantation, Keran suffered from two infectious complications, which were successfully treated. His clinical conditions improved and he returned home five months later. He is now 3 years old and healthy.

Cite mechanisms that participate in the prevention of undesirable responses of the adaptive immune system.

Cite different mechanisms Tregs use to exert their suppressive functions.

What are the main 3 conclusions of Sakaguchi’s 1995 experiment in which transfer of CD4+CD25- T cells to an alymphocytic host provoked multiple autoimmune diseases that were prevented by CD25+ T cell addback?

What cytokine are Tregs critically dependent on?