An 8 year old boy is referred to a regional hospital for a surgical consultation for a lobectomy following a diagnosis of bronchiectasis due to a chronic history of recurrent respiratory infections. 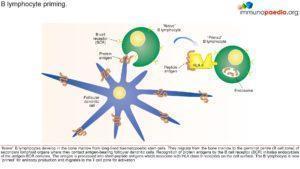 The Role of CD40 and its ligand (CD154)
CD40, member of the TNF receptor family, is expressed by a variety of cells including B cells, macrophages, dendritic cells and other nonimmune cell types.
CD40 activation occurs via binding to its ligand CD154, which is expressed on activated T cells. 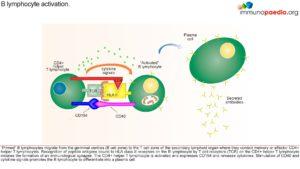 CD40 activation is critical for: 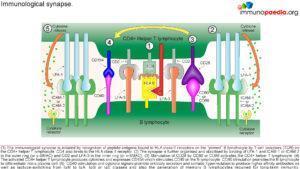 Mutations in either CD40 or CD154 gene cause Hyper IgM Syndrome, HIGM3 and HIGM1 respectively, which is characterised by: 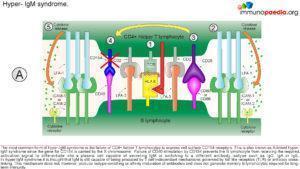 Due to lack of CD154, T cell interaction with protein antigen processing cells such as CD19 is impaired preventing ligand interaction of B cell CD40 with CD154 on T cells with subsequent defective response to T cell dependent antigens i.e. the immunological synapse is not formed. 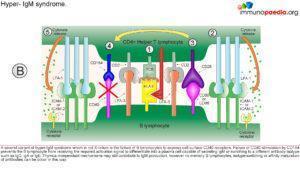 This synapse gives essential co-stimulatory signal to B cells necessary for the B cells to switch from low affinity IgM production primary response to the B cell producing high affinity antibodies of different classes such as IgG and IgA. 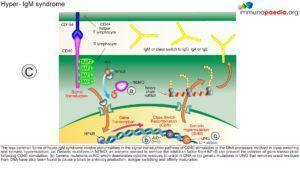 The most likely diagnosis of Hyper IgM syndrome was made but screening for CD40 ligand (CD154) was normal.

Give possible reasons for bronchiectasis developing in childhood.

In the absence of known causes for primary or secondary immunodeficiency, possible causes could include measles, pertussis and post infectious complications of pulmonary tuberculosis, especially in a poor socioeconomic setting.

What else on history is essential for evaluating this patient with regards to immunity?

Perinatal history, gestation, birth weight – for example premature infant has an immature immune system and lack of maternal antibodies. Vaccination history with regards to responses to live vaccines such as measles and BCG. Adverse events from vaccinations would point to a T-cell deficiency.

Which other clinical findings would you like information on?

Lymphadenopathy including tonsillar tissue presence, especially where defective B cell development is suspected.

If this child has a primary or secondary Immunodeficiency - which component of the immune response do you expect to be impaired?

How do you explain a normal Se IgM with the other Immunoglobulin isotypes low?

There are high lymphocyte subsets except for very decreased B Cells (CD19).

Could this patient have X-linked Agammaglobulinaemia (XLA) (Bruton’s)?

No, XLA cannot produce Se IgM because of absent B cells (BTK deficiency).

What is the possible cause of the T cell subset abnormal distribution?

How would you expect a patient with very low B cells to respond to vaccination?

Who in the boy’s family would possibly be the best match for HLA typing for a bone marrow transplant?

An identical twin or haploidentical sibling