A 2 year old boy presented to a district hospital with decreased oral intake, listlessness and fever. On arrival he was adequately resuscitated but continued to have spiking fevers and a depressed level of consciousness.

Six months ago the patient presented to the hospital with a two day history of irritability, decreased appetite, discomfort on lying down, recurrent fever, profuse sweating and diarrhea, no vomiting. On admission he was lethargic and dehydrated which worsened over a few hours and culminated in a seizure. He had no prior history of seizures. He was then diagnosed with severe malaria. He was treated appropriately and discharged 2 weeks later with no residual effects.

Past medical and surgical history

Travel History
No travel outside of Musina since birth.

On appearance the child is miserable and toxic looking.

Height and weight were in the 65 percentile 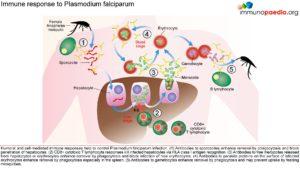 Human malaria infection is caused by four protozoa species of the genus Plasmodium. These are P.falciparum, P. malariae, P. vivax, and P. ovalae, of which the preponderance of severe malaria and mortality is due to P.falciparum. Children living in endemic areas typically have a primary malaria episode during their first few years of life and most toddlers and juveniles develop some degree of acquired immunity against severe disease but still experience periodic clinical episodes. Those who survive to adulthood are often clinically immune, however, low grade parasitaemia is often present but causes few symptoms. Adults in endemic areas maintain low-grade infections throughout the transmission season. Endemicity is typically defined as parasitaemia rates or palpable spleens in children aged 2-9 years. The categories include holoendemic where the rate is >75% (transmission of infection is year round and the bulk of mortality is seen in infants), hyperendemic where the rate is 51-75% (mortality is also mostly seen in infants), mesoendemic where the rate is 11-50% (regular seasonal transmission affecting infants, toddlers and adults who develop chronic ill health) and hypoendemic which is <10% (occasional epidemics, whole population is susceptible to severe and fatal disease). Clinical immunity also fails if a person moves away from an endemic area and during pregnancy. 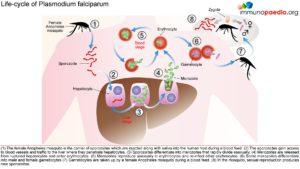 The female Anopheles mosquito inoculates the host with 10 to 100 malaria sporozoites from her salivary glands during a blood meal. These microscopic motile forms of the malaria parasite are carried via the bloodstream to the liver. Within 30 minutes, those sporozoites not bound by previously formed antibodies, invade and begin replicating in hepatocytes. Parasites not destroyed by cytotoxic T lymphocytes in the liver replicate for 2-10 days creating merozoites. Tens of thousands of merozoites are released into the bloodstream as the hepatocyte bursts. Each merozoite is then able to bind, invade, and infect erythrocytes. After red blood cell (RBC) infection, each merozoite matures to form a highly metabolically active trophozoite, which replicates asexually to become multinucleate schizonts. As the schizonts enlarge they rupture erythrocytes 48 hours after their formation which results in 20-30 new merozoites which continue the cycle. Some sexual forms of the parasite develop during this erythrocytic stage; these gametocytes are responsible for infecting the salivary glands of female Anopheles mosquitoes. The gametes mature into ookinetes then into an oocyst. The oocyst ruptures and releases sporozoites which can then infect another host during a blood meal. 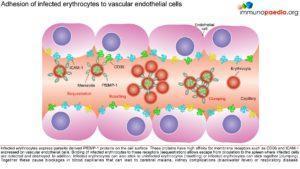 A person’s first infection usually creates no symptoms for 7-10 days, which is followed first by nonspecific symptoms such as headache, fatigue, abdominal discomfort and muscle aches. This is then followed by fever. During this latent period, parasite maturation occurs in the liver and parasites undergo a cycle of blood stage replication. Symptoms begin when the parasites undergoing an asexual blood cycle, reach threshold density sufficient to initiate the host’s pathogenic immune response process. Fever, malaria’s hallmark, is due to parasite-derived molecules released from ruptured host cells. These molecules activate host inflammatory cells, such as macrophages, which secrete pro-inflammatory pyrogenic cytokines such as interleukin (IL)-1 and tumor necrosis factor (TNF)–α. As parasites synchronise their replication cycles the fever becomes periodic. Although childhood febrile convulsions can occur, generalised seizures are typically associated with P.falciparum infections and may herald cerebral malaria. Splenomegaly results from massive reticuloendothelial system activation to clear parasitised erythrocytes. Mild hepatomegally is common in young children, while mild jaundice is more common in adults. Anaemia is also common and is partly due to the phasic rupture of RBCs by mature schizonts, splenic sequestration of red blood cells and ineffective erythropoiesis. 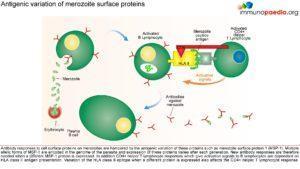 Parasitised erythrocytes circulate to the microvasculature where they bind to the scavenger receptor CD36 or the intercellular adhesion 1 (ICAM-1) and occlude microvessels. Binding of infected erythrocytes to these receptors (sequestration) allows the cells to escape from circulation to the spleen where infected cells are detected and destroyed. In addition, infected erythrocytes can also stick to uninfected erythrocytes (rosetting) or infected erythrocytes can stick together (clumping). In particular, parasitized RBCs adhere to the endothelial lining of capillaries in the brain, kidneys, gut and liver. Inflammation caused by these parasite-receptor interactions and release of immune stimulatory molecules from infected RBCs upon rupture are thought to be responsible for organ specific pathology such as cerebral malaria, renal disease, Blackwater Fever (due to widespread intravascular haemolysis giving rise to dark urine) and respiratory distress 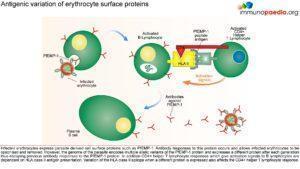 tures of Severe Falciparum Malaria
Correctly treated uncomplicated P.falciparum carries a mortality rate of 0.1%. When organ dysfunction or parasitaemia of >3% occurs mortality also increases dramatically. These manifestations, which were also seen in this clinical case, include:

Cerebral Malaria
Onset may be gradual or sudden following a convulsion. Features include obtundation, delirium, abnormal behaviour and coma. Focal neurologic signs and meningism do not typically occur. Fifteen percent of children who survive cerebral malaria, especially when associated with hypoglycaemia, coma and anaemia will have some residual neurologic deficit.

Hypoglycaemia
Common complication that is associated with a poor prognosis, particularly in children and pregnant women. Hypoglycaemia is due to a failure of hepatic gluconeogenesis and an increase in glucose consumption by host and parasite. This may manifest as an added complication during treatment as Quinine is also a potent stimulator of insulin secretion. 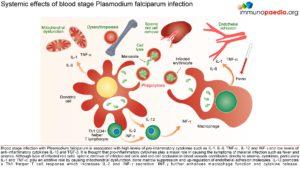 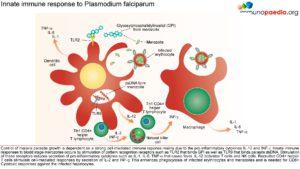 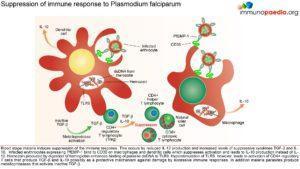 alaria has evolved unique strategies to evade the host immune system and is therefore able to cause repeated and serious infections. To overcome and control this disease one important aspe
ct is to develop an efficacious and safe vaccine. In order to do this it is necessary to understand the host immune responses and the immune evasion techniques that malaria employs.

It is recommended that patients receive prompt and effective treatment. Ideally, treatment should be initiated in a hospital setting. The choice of chemotherapy for malaria is dependent on the severity of disease, the known or suspected resistance pattern of the parasite in the area where the malaria infection was acquired, the species of parasite, patient characteristics (age, pregnancy, co-morbidity, allergies, other medications) and the presence or absence of vomiting. In South Africa, malaria treatment varies in the different provinces due to differences in the resistance patterns. These treatment guidelines may not be appropriate for infections contracted in other countries with high levels of multi-drug resistance.

The patient was treated with IV artesunate and anti-pyretics for 3 days. IV antibiotics were started on admission as there was no confirmatory diagnosis at the time and culture results were not yet available. On the third day the child was markedly improved. He was started on a full course of mefloquine on receiving laboratory results which confirmed infection with P.falciparum. Upon discharge there were no neurologic sequelae. He and his family were counseled on the use of insecticide-treated bed nets and indoor residual spraying.

Severe P.falciparum malaria, which has progressed to cerebral malaria.

With regards to parasitized erythrocytes which endothelial receptors do they bind to resulting in occlusion of microvessels?

What are the three ways that infected erythrocytes can bind to occlude microvessels?

What is the benefit of occlusion of microvessels?

It is an evasion strategy which allows the cells to escape circulating to the spleen where infected cells would be detected and destroyed.

Which organs are most affected by occlusion of microvessels?

In particular the endothelial lining of capillaries in the brain, kidneys, gut and liver are affected by occlusion of microvessels.

Describe the immune response required to neutralize malaria parasites at each stage during their development.