Case of a right axillary swelling

Four weeks after starting ARVs an 11 month old baby presented with a one-week history of a right axillary swelling which was found to be 2.5cm in diameter, hard, tender and non-fluctuant. Six days later the mass had enlarged to a size of approximately 4x3cm.

The child was born an HIV-exposed infant and received a single-dose of nevirapine syrup, as well as the standard immunisations including the Bacille Calmette-Guérin (BCG) vaccine. The mother was counseled and requested to bring the child back for an HIV test at 6 weeks. However this was not done until 9 months later at which time the infant tested HIV positive on two rapid ELISA blood tests with a CD4 percentage of 9.28 (absolute  count 378x10e6/L). Her caregivers then defaulted on a referral and telephonic reminders to initiate her on antiretroviral therapy.

One month later, the infant now 10 months old, presented with a two-week history of diarrhoea and a 4 month history of lethargy and failure to thrive. All immunisations were up to date and no TB contacts were identified. On examination she was found to be:

She was admitted to the paediatric ward where she was rehydrated, transfused with packed cells, and treated with analgesia, a topical antifungal and empiric intravenous antibiotics. Within 5 days her diarrhoea resolved completely and she was discharged on oral amoxicillin clavulanic acid and an appointment for the ARV clinic.

Two weeks later she was stable, having gained 1 kg. The mother still complained of persisting lethargy in the child. Examination revealed a non-tender hepatosplenomegaly and right-sided suppurative otitis media. She was started on ARVs stavudine, lamivudine and nevirapine.

Currently, four weeks after starting ARVs she presented with a one-week history of a right axillary swelling which was found to be 2.5 cm in diameter, hard, tender and non-fluctuant. It enlarged rapidly and within six days had reached approximately 4×3 cm.

Although the exact mechanism involved in the development of immune reconstitution inflammatory syndrome (IRIS) is not clearly understood, the explanation presented in this discussion is based on current theories.

Initially, naive CD4+ T cells (termed Th0) encounter processed antigen by dendritic cells through the MHC class II and T cell receptor in the T cell zone of secondary lymphoid tissues, such as the lymph nodes. Depending on the type of cytokine released by the dendritic cell upon this interaction, the Th0  CD4 cells differentiate into either Th1, Th2, Th17 or Treg phenotypes. 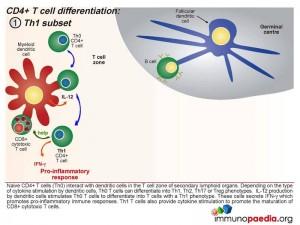 Interleukin-12 released by the dendritic cells will cause the Th0 CD4 cells to differentiate into Th1 functional cells. These cells secrete IFN-γ which promotes pro-inflammatory responses and will mobilize the maturation of CD8+ cytotoxic T cells and stimulate NK cells. 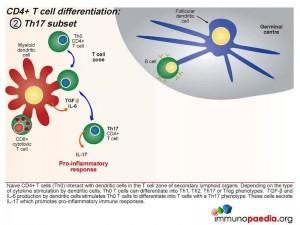 When a combination of Transforming Growth Factor (TGF β) and IL-6 are released together by the dendritic cell, the Th0 CD4 cells differentiate into Th17 functional cells. These cells secrete IL-17, which also induces pro-inflammatory cytokines and tips the balance towards inflammatory immune responses. 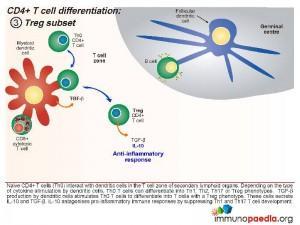 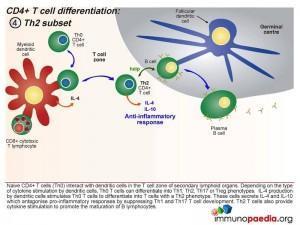 When the dendritic cells release IL-4 after Th0 binding, the cells differentiate into Th2 cells. These cells secrete IL-4 and IL-10 which antagonise pro-inflammatory responses by suppressing Th1 and Th17 T cell development. Th2 T cells also provide cytokine stimulation to promote the maturation of B cells to plasma cells and the production of antibodies. 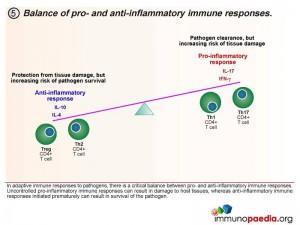 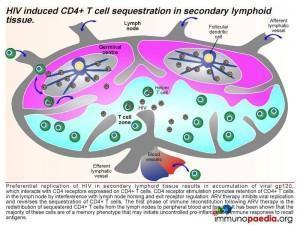 What happens when IRIS occurs?

Currently, it is thought that IRIS is a result of an imbalance towards pro-inflammatory immune responses during the immune reconstitution phase that occurs shortly after initiation of ARV therapy. There is a preferential differentiation of pro-inflammatory CD4+ T cell subsets.

If we break down the sequence of events: when a person becomes infected with HIV, the virus replicates preferentially in secondary lymphoid tissue. 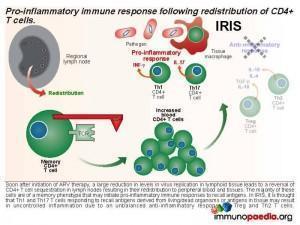 This results in an accumulation of viral gp120, which interacts with CD4 receptors expressed on CD4+ T cells and promotes retention of CD4+ T cells in the lymph node by interference with lymph node homing and exit receptor regulation. When ARV therapy is initiated, the drugs act by inhibiting viral replication and allow the release of sequestrated CD4+ T cells. Thus, the first phase of immune reconstitution following ARV therapy is the redistribution of sequestered CD4+ T cells from the lymph nodes to peripheral blood and tissues. It has been shown that the majority of these cells are Th1 and Th17 memory cells and the second phase is the resulting imbalance towards inflammatory responses due to these cells initiating uncontrolled pro-inflammation.

A course of amoxicillin clavulanic acid and metranidazole was prescribed for the differential of an abscess and clotrimazole for the skin lesion. Despite treatment, the right axillary mass continued to rapidly enlarge to a size of more than 10 cm.

What is the diagnosis in this case?

In this specific case presentation, there was an acute lymphadenopathy ipsilateral to the BCG inoculation site occurring 4 weeks after initiation of HAART, which is fairly typical of BCG IRIS. In children, IRIS resulting from BCG may occur months to years after vaccination. Most occur within the first 3 months of starting HAART and can be as early as 1 week after initiation of HAART. Less commonly, IRIS can manifest as an occurrence of non-infectious disease, such as Guillain-Barré syndrome.

A paradoxical deterioration in a patient’s condition after starting HAART – related either to a previously undetected infection or a partially treated infection. In the case of TB and BCG, restoration of cellular immunity to mycobacterial antigens is responsible for an inflammatory response with the lymphadenitis, fever, malaise. Less commonly, IRIS can manifest as an occurrence of noninfectious disease, such as Guillain-Barré syndrome.

What factors make a patient more likely to develop an IRIS event?

A patient with Stage IV immunosuppression and a low CD4 count is at a higher risk for an IRIS event. A CD4 <10% or <50 cells/ul is an independent risk factor of IRIS development. Patients who have been on TB treatment for a short period of time (less than 2 months) are more likely to develop an IRIS response to the dead/partially treated bacilli. Patients with suspicion of TB but not started on TB treatment before HAART are at higher risk for an ‘unmasking of TB’.

In what time frame does an IRIS event occur?

How does IRIS occur?

Although the exact method is not yet known it is thought that IRIS is due to an imbalance towards pro-inflammatory immune responses during the immune reconstitution phase that occurs shortly after initiation of ARV therapy. With a preferential differentiation of pro-inflammatory CD4+ T cell phenotypes.

Who should get BCG vaccinations?

The World Health Organization currently recommends giving BCG to all neonates in areas with a high prevalence of tuberculosis, irrespective of HIV exposure, unless the child has symptomatic HIV disease. HIV-infected infants and other immunodeficient infants are at risk of BCG-related complications. While disseminated disease is rare in immunocompetant children, HIV-infected children have significantly increased risk of developing distant or disseminated BCG disease.

Should antiretroviral therapy be stopped or continued if IRIS is suspected/confirmed?

Ideally, HAART should be continued rather than risk the interruption of treatment. The IRIS event is occurring as a result of an infection other than HIV, and thus, the cause of the IRIS needs to be treated while HAART is continued. Mild cases of IRIS can be treated supportively, while HAART is continued. In moderate cases of IRIS, physicians can consider the addition of temporary corticosteroids to dampen the inflammatory response while continuing HAART and the causative treatment. However, if the case is life threatening, then an interruption of HAART may be unavoidable and safer.

Should the patient be treated for TB?

Tuberculosis is highly endemic in South Africa and the possibility of dual disease with M. bovis BCG and M. tuberculosis should always be considered. Unless tuberculosis can be confidently excluded, pyrazinamide 20–25mg/kg/day should be included in the chemotherapeutic regimen for the first two months. This patient was not initially treated for tuberculosis (pyrazinamide excluded) in the light of her negative contact history, normal chest radiograph findings and her robust clinical response to HAART.

Should her ARV’s be stopped in the face of rapidly enlarging lymphadenopathy?

IRIS occurs because there is a robust immune response to appropriate HAART. Treatment is directed towards the pathogen provoking the exuberant inflammatory response. HAART should be continued with supportive treatment as necessary. With severe reactions, the addition of temporary corticosteroids to dampen the inflammatory response may be considered. Corticosteroids would be indicated when there is threatened airway obstruction, rapidly enlarging cervical or hilar lymph nodes or abdominal obstruction secondary to enlarging intra-abdominal lymph nodes. However, if the case is life threatening, an interruption of HAART may be unavoidable and safer.

Who is at risk of an IRIS reaction?

WHO Stage IV disease and a low CD4 (especially CD4 <10% or <50 cells/μl) are risk factors for IRIS development as well as patients starting ART in close proximity with diagnosis of an opportunistic infection (OI). For example, children who start HAART within two months of starting tuberculosis treatment are more at risk of an IRIS reaction to the dead or dying tubercle bacilli.