This section has been designed to assist you with understanding the use of the diagnostic tests used in immunological testing and clinical practice.

The multiplication of the HIV in the infected cells leads to cell rupture and thus the release of HIV virus particles, which are first detected in the form of HIV RNA and next in the form of HIV antigen. This is followed by production of specific antibodies to either HIV-1 or HIV-2. The HIV antigen may become undetectable at this time because of the formation of antibody-antigen complexes. Alere HIV Combo can only detect free p24 antigens.

How the Test Works

ELISA (enzyme –linked immunosorbent assay) is a serological assay in which a bound antigen or antibody is detected by a linked enzyme that converts a colourless substrate into a coloured product. There are 4 generations of HIV antibody ELISA tests. The progression of these assays has been depicted in our series of 4 graphics. 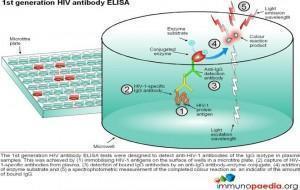 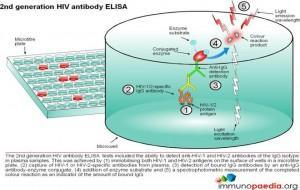 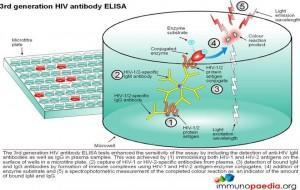 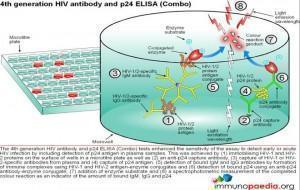 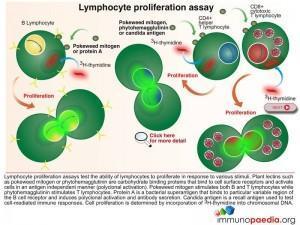 The Lymphocyte Proliferation Assay (LPA) is a test used to measure the ability of lymphocytes to proliferate in response to various stimuli such as candida, pokeweed and phytohaemagglutinin. These plant lectins are carbohydrate binding proteins that bind to cell surface receptors and activate cells in an antigen independent manner. Most people will respond to at least one of several common microbial antigens. LPA can be used to measure improvements in immunological function following antiretroviral therapy and to detect the presence of immune responses against specific opportunistic pathogens. 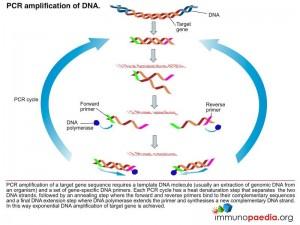 The polymerase chain reaction (PCR) is a technique used for a wide range of tasks including detection and diagnosis of infectious disease. The technique exponentially amplifies a fragment of DNA or RNA by in vitro enzymatic replication and because PCR amplifies the regions of DNA or RNA that it targets, PCR can be used to analyze extremely small amounts of sample. Viral DNA or RNA can therefore be detected by PCR. The primers used need to be specific to the targeted sequences in the DNA or RNA of a virus, and the PCR can be used for diagnostic analyses or DNA or RNA sequencing of the viral genome. The high sensitivity of PCR permits virus detection soon after infection and even before the onset of disease, allowing for a significant lead in treatment. A patient’s viral load can also be quantified by PCR-based DNA or RNA quantitation techniques.

The Mantoux test also called the Purified Protein Derivative (PPD test) or Tuberculin Sensitivity Test is a diagnostic tool for tuberculosis. The test shows if a person has been exposed to TB bacteria, but it does not indicate if the infection is active or latent or if the patient is currently infectious. This test is an example of a Type IV or cell-mediated/delayed hypersensitivity immune response. 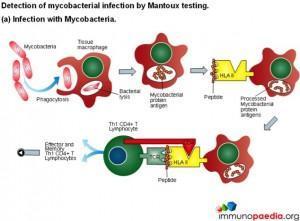 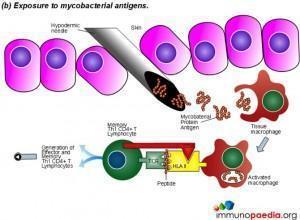 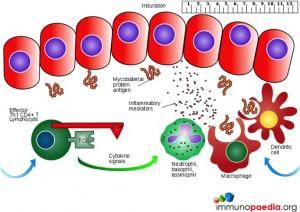 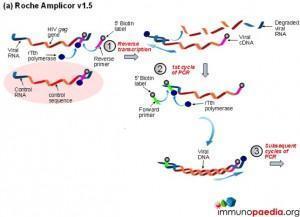 The viral load assay is used to monitor the status of HIV disease, in conjunction with the CD4 count and physical disease progression. It is also used to guide therapy and to predict the progression of HIV.  A viral load is conducted when a patient is first diagnosed with HIV, at the start of therapy or when a therapy is changed and regularly thereafter to monitor any changes. With effective therapy, viral loads typically decrease within 3-6 months. When a patient has <25 copies of virus they are said to be virally suppressed. Evidence shows that keeping the viral load levels as low as possible for as long as possible decreases the complications of HIV disease.

There are several methods for testing viral load; results are not interchangeable so it is important that the same method be used each time.

The 5 methods for testing Viral Load are: 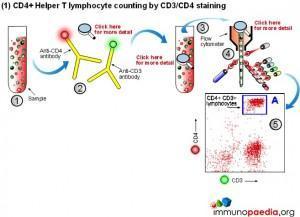 Manual methods using cell selection and microscope counting techniques can be used, however, automated counting of CD4+ Helper T lymphocytes in blood is usually performed on a flow cytometer. Although more expensive, this method is more accurate and less labour intensive.

There are two approaches regarding the type of cell surface markers used.

1) Conventional CD4 counting (CD3 and CD4 labelling)
The conventional method makes use of fluorescent antibodies to CD3 and CD4 cell surface receptors. CD3 is part of the T cell receptor (TCR) and is expressed on CD8+ Cytotoxic T lymphocytes and CD4+ Helper T lymphocytes. CD4 is expressed on Helper T lymphocytes and monocytes. Using fluorescence detection on a flow cytometer the fraction of total lymphocytes double-positive for CD3 and CD4 (i.e. CD4+ Helper lymphocytes) can be measured. For single platform assays the absolute number of the double-positive cells can be inferred from calibrated bead standards or by determining the volume of blood used with a volumetric flow cytometer. The dual-platform method relies on a full blood count by a haematology analyser to provide a value for the total lymphocyte count, while the flow cytometer gives a percentage of lymphocytes that are CD4+ Helper T lymphocytes. Together these readings can be used to calculate absolute CD4 counts. The most reliable and robust counting procedure is the single platform assay. 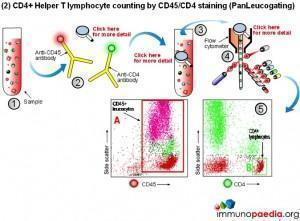 2) CD4 counting by the PanLeucogate method (CD45 and CD4 labelling)
An alternative labelling method uses fluorescent antibodies to CD45 and CD4 cell surface receptors. CD45 is expressed on all leucocytes and is not expressed on mature red blood cells (erythrocytes) or platelets (thrombocytes). It therefore serves as a marker of total white blood cells. CD4 is expressed on Helper T lymphocytes and monocytes. The dual platform method requires a haematology analyzer to provide only the total leukocyte count. This is the reason PanLeucogating is preferred when using the dual platform method, only a total white cell count is needed from the haematology analyzer and the need for a differential count (the lymphocyte count) from the haematology analyser is no longer necessary. The leucocytes serve as a common counting parameter when using the flow cytometer and haematology analyzer. Since CD4 is expressed on both Helper T lymphocytes and monocytes the light scatter parameters available on the flow cytometer are used to differentiate between them because of differences in complexity between the populations. This method can also be used on a single platform basis using calibrated bead standards or a volumetric flow cytometer to calculate the absolute CD4 count. 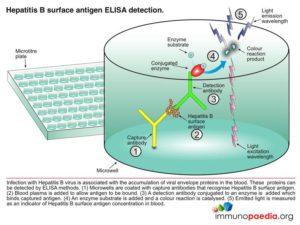 Hepatitis B surface antigen (HBsAg) is a protein antigen produced by hepatitis B virus (HBV). This antigen is the earliest indicator of acute hepatitis B infection and is able to identify infected people before they are symptomatic. HBsAg becomes undetectable in the blood during the recovery period. Children and immunocompromised patients such as patients with HIV infection who become chronically infected may remain HBsAg positive.

To detect this antigen we perform an Enzyme-Linked Immunosorbent Assay test (HIV ELISA). 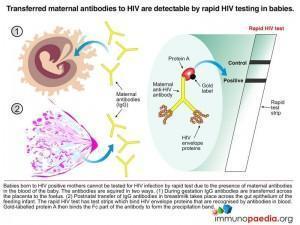 A baby born to a sero-positive mother will also be sero-positive. This positivity can last up to the first 18 months of life because the test detects maternal antibodies. For this reason, it is useless to test the baby at two months using an HIV antibody test as IgG will have either crossed the placenta to the baby in utero or via beast milk postnatal.  Until these antibodies disappear the baby will continue to test sero-positive.  After 18 months, if the baby is truly infected with HIV, the child’s own immune system will be the cause of a sero-positive antibody test. 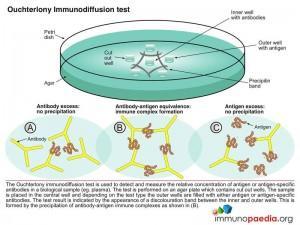 Immune precipitates can form in an agar matrix. When antigen and antibody diffuse toward one another in agar, or when antibody is incorporated into the agar and antigen diffuses into the antibody containing matrix, a visible line of precipitation will form. As in a precipitation reaction in fluid, visible precipitation occurs in the region of equivalence, whereas no visible precipitate forms in regions of antibody or antigen excess. This immunodiffusion reaction can be used to determine relative concentrations of antibodies or antigens, to compare antigens or to determine the relative purity of an antigen preparation.

In the Ouchterlony method both antigen and antibody diffuse radially from wells toward each other, thereby establishing a concentration gradient. As equivalence is reached, a visible line of precipitation forms. This is a simple and effective qualitative tool for determining the relationship between antigens and the number of different Ag-Ab systems present. 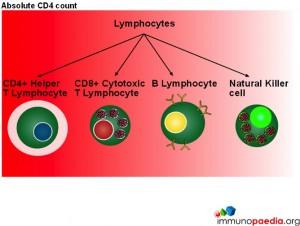 In this series of graphics the three basic cell types found in blood (leukocytes, erythrocytes and platelets) have been depicted. The graphics further explain the leukocyte cell lines and include the granulocytes, monocytes and lymphocytes and the different cells which make up these groups of cells.

When measuring disease states it is an absolute CD4 count which is used to monitor patients. 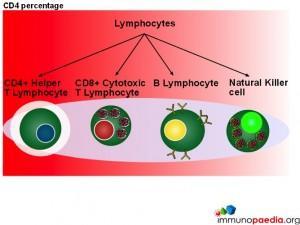 This is because lymphocytes are present in higher numbers in children thus making the count less accurate. The WHO has therefore recommended that all children under the age of 5 should be evaluated with a CD4 percentage when assessing disease status and decision making for initiation of treatment.