A case of decreased joint function, fever and rash

A 7 year old girl presented to her local hospital for the second time in 3 months with arthralgia, a migratory skin rash and fever for 5 days. She was admitted and within 2 days developed a depressed level of consciousness, epistaxis and seizures.

Patient was diagnosed one year earlier with pulmonary TB (PTB) on positive cultures obtained from gastric washings. Her PTB infection was accompanied with symptoms of fever and torticollis. She was started on TB treatment but only completed 2 months of treatment.

Over the course of the following 3 months she developed progressive arthritis, progressive loss of joint function and a chronic remitting fever and rash. 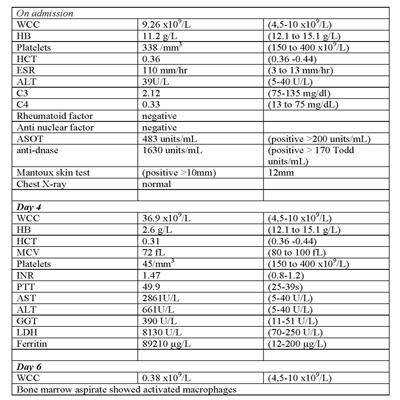 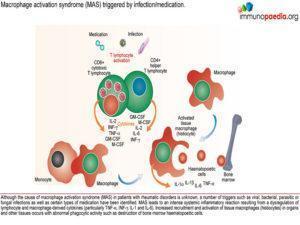 Based on the clinical presentation and investigations the differential diagnosis must now include Macrophage activation syndrome (MAS). 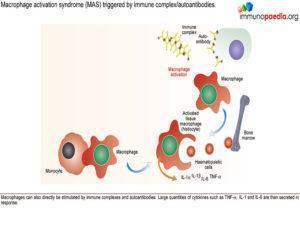 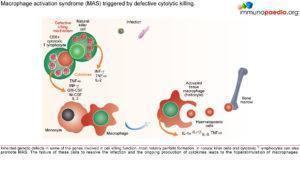 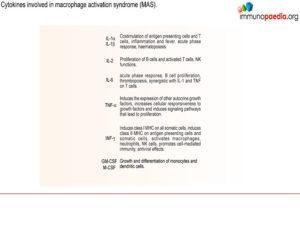 May be the result of a mutation in the perforin gene leading to decreased expression of perforin:

Diagnostic Guidelines:
Variables that showed the highest (0.75) sensitivity and specificity for MAS:

(b) Variables that did not prove sufficiently sensitive and specific:

Management:  Treatment strategies for MAS
MAS is a potentially life threatening complication. It is therefore important to have a high threshold of suspicion in order to make an early diagnosis and start prompt treatment:

What is the cause of Macrophage activation syndrome (MAS)?

The cause is unknown but a number of triggers such as infection and certain types of medication have been identified.

What is the effect of increased levels of T-cell and macrophage derived cytokines, particularly TNF-a, INF-y, IL-1 and IL-6?

An overwhelming systemic inflammatory reaction, which is potentially fatal.

Perforin is primarily expressed in CD8+ T cells and NK cells. Its role in the cytolytic process is to form pores in the membrane, leading to osmotic lysis of the target cells. There is evidence that perforin expression is important in preventing both humoral and cellular autoimmunity. Perforin deficient CD8+ and Natural Killer (NK) cells may perpetuate a chronic proinflammatory response. Perforin deficiency may therefore increase macrophage activation due to increased production of IFN-γ and granulocyte macrophage colony stimulator factor (GM-CSF) associated with persistent lymphocyte activation. It is possible that it therefore plays a role in the predisposition to or occurrence of MAS. Most patients with a low perforin expression have had a history of previous MAS episodes.

What is the mechanism of macrophage activation syndrome (MAS)?

Again this is unclear, however a possible explanation is that patients with MAS have decreased natural killer (NK) function which may be responsible for a diminished ability to kill infected cells and remove the source of antigenic stimulation. This persistent antigen stimulation would lead to persistent antigen driven T-cell activation and proliferation associated with an increased production of cytokines such as IFN-γ and GM-CSF which stimulate macrophages. This sustained macrophage activation causes tissue infiltration with resulting clinical symptoms and tissue damage.