Activation of B cells 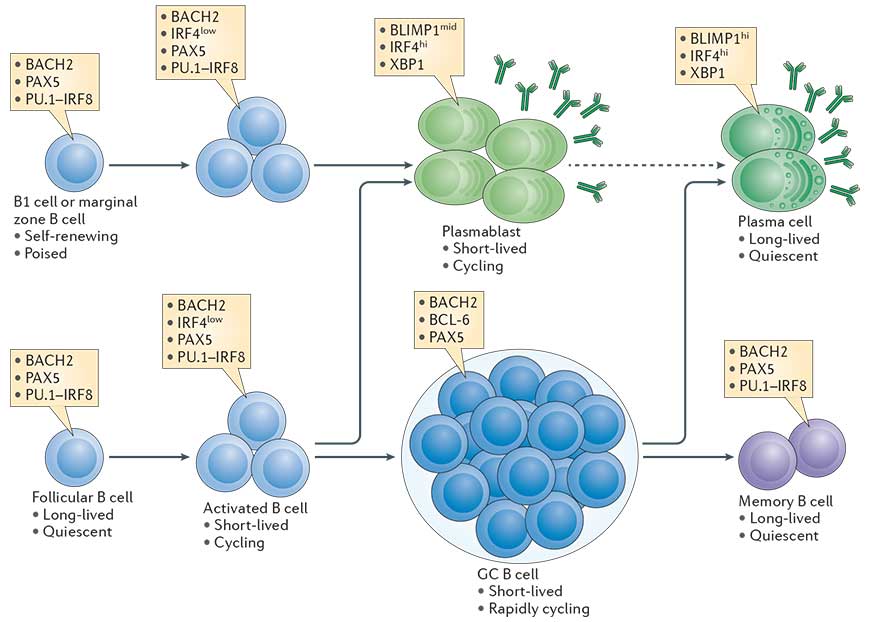 Figure 1: The cellular stages of late B cell differentiation. The majority of mature B cells are located in the follicles of lymphoid organs and are known as follicular B cells. Others specialized B cell subsets include marginal zone B cells, which localize to the region between the red and white pulp in the spleen, and B1 cells, which are found in the peritoneal and pleural cavities. All mature B cell subsets express the transcription factors paired box protein 5 (PAX5). PU.1 interferon-regulatory factor 8 (IRF8) and BTB and CNC homologue 2 (BACH2), whereas low levels of IRF4 are induced by antigen receptor signalling. B cells activated by antigen (also termed B lymphoblasts) are capable of rapid proliferation, immunoglobulin class-switch recombination, and differentiation into short-lived plasmablasts that express high levels of IRF4 and X-box-binding protein 1 (XBP1), and intermediate (mid) levels of B lymphocyte-induced maturation protein 1 (BLIMP1) and secreted antibody. Follicular B cells can also upregulate B cell lymphoma 6 (BCL-6) and repress IRF4 expression during the germinal centre (GC) reaction where affinity maturation of the antigen receptor occurs. B cells with high-affinity antigen receptors exit the GC and differentiate into either memory B cells, which express a similar transcriptional signature to mature B cells, or long-lived plasma cells, which express high levels of BLIMP1, IRF4 and XBP1 and produce large quantities of antibody. Although BLIMP1h plasma cells derive from BLIMP1mid cells, it remains unknown whether plasma cells are derived from plasmablasts (indicated by the dashed arrow) or from an earlier plasma cell-committed stage. The contribution of marginal zone B cells and B1 cells to the long-lived plasma cell compartment is also poorly characterized. [Nutt et al., Nature Reviews Immunology, 2015] 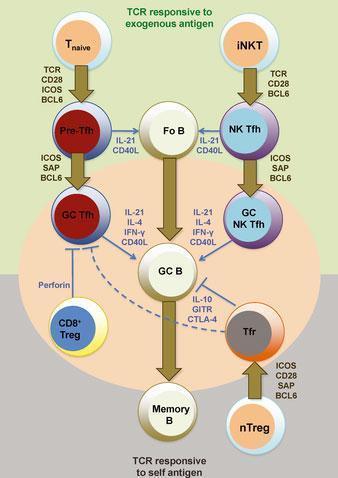 The plasma cell and antibody secretion