Immunoregulation and the tumor microenvironment

This year, the International Union of Immunological Societies has partnered with Immunopaedia and Frontiers in Immunology to host a series of webinars on different topics in the field of Immunology (Webinar series sponsored by Thermo Fisher Scientific). The first webinar of the year featured a talk by Pamela Ohashi on “Immunoregulation and the tumour microenvironment”. The full webinar is available below. 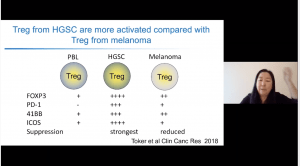 Prof. Ohashi presentation focused on PD-1 blockade, specifically why PD-1 based immunotherapies work for some cancers but not others. She began with an overview of PD-1 and how its interaction with PD-L1 (on antigen presenting cells) can affect T cell function. Although PD-1 blockade has transformed cancer treatment, some cancers such as head and Neck; non-small cell lung, kidney and ovarian cancers, among others, do not respond to PD-1 blockade immunotherapy. Improving PD-1 based cancer immunotherapy requires a deeper understanding of the role of PD-1 in different tumour microenvironments.* Prof Ohashi presented data that compared responses between ovarian and melanoma cancers, cancers that respond poorly and favourable to PD-1 blockade, respectively. This comparison aimed to identify factors/mechanisms that explain why some tumours don’t respond well to PD-1 blockade.

Studies have shown that poor tumour infiltration of T cells is associated with poor prognosis epithelial ovarian cancer (Zhang et al., 2003 NEJM). Thus suggesting that improving T cell infiltration could improve cancer prognosis. Interestingly, they observed T-regs found in ovarian cancer expressed higher levels of PD-1 and FoxP3 and superior anti-inflammatory activity than T-regs in melanoma cancer and peripheral blood (see image). She next presented data that investigated expression patterns of PD-L1, B7-H3 and B7-H4 on biopsies from ovarian cancer. She showed data that demonstrated high expression of B7-H3 on stromal cells compared with tumour cells, while expression of B7-H4 was higher in tumour compared to stromal cells. Interestingly, PD-L1 was not expressed on tumour cells but was expressed on stromal cells. Thus, potentially suggesting why PD-L1 blockade does not work as well for ovarian cancer therapy, further, it highlights potential implication for combination therapies. 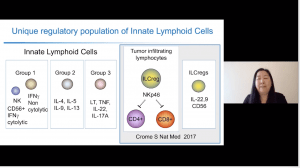 Lastly, she described a population of innate lymphoid cells that have regulator capacity (inhibited CD4 and CD8 T cells via NKp46), express high levels of CD56+ and produced IL-22 and IL-9, which she termed ILC-regs. These cells also expressed high levels of CD7, 2B4 and TIM-3, phenotypes associated with limiting tumour infiltrating lymphocytes (TIL) expansion and slow-growing breast cancer cultures in vitro. She further highlighted that tumours associated with different cancers have different micro-environment, such as higher proportions of CD4+ T cells but lower levels of CD3+ T cells in fast-growing breast cancer cultures.

She ended her talk suggesting that the potential barrier to PD-1 blockade mono-therapy in ovarian cancer could be due to higher proportions of activated T-regs and ILCregs that may interfere with tumour immunity during PD-1 blockade. 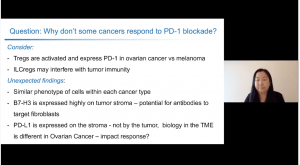