The waste disposal Hypothesis and SLE 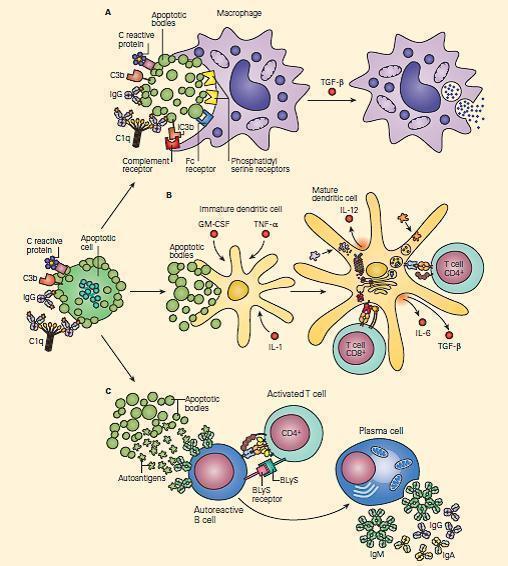 Figur 1: The waste-disposal hypothesis for systemic lupus erythematosus. Panel A: A macrophage is shown engulfing apoptotic bodies released from an apoptotic cell. There are a variety of ligands on apoptotic cells and receptors on macrophages that make this process extremely efficient. The binding of C1q, C-reactive protein, and IgG to apoptotic cells may promote the activation of complement, leading to the clearance of apoptotic cells by ligation of complement receptors. Once the macrophage has engulfed the apoptotic cell, it secretes the anti-inflammatory cytokine transforming growth factor β (TGF-β). Panel B: When there is an excess of apoptotic cells and the failure of one or more of the normal systems of receptor-ligand recognition for the uptake of apoptotic cells, immature dendritic cells may take up apoptotic bodies. If this occurs in the presence of inflammatory cytokines such as granulocyte-macrophage colony-stimulating factor (GM-CSF), tumor necrosis factorα (TNF-α), and interleukin-1, the dendritic cell may mature into an autoantigen-presenting cell. The dendritic cell is shown presenting autoantigens to a T cell in the presence of costimulatory molecules and cytokines. Panel C: Shows an autoreactive B cell that has taken up autoantigens from an apoptotic cell through its antibody receptors. The B cell is receiving help from an activated T cell, which is expressing co-stimulatory molecules and cytokines involved in the maturation of B cells, including an important member of the tumor necrosis family, B lymphocyte stimulator (BLyS), also referred to as zTNF-4. The autoreactive B cell divides and matures into a plasma cell that secretes autoantibodies. It is likely that in the majority of patients, systemic lupus erythematosus develops only in the presence of abnormalities in more than one of these steps. (Adapted from Walport MJ. Complement. Second of two parts. N Engl J Med. 2001;344:1140–4.) [Reproduced with permission from Bellanti, JA (Ed). Immunology IV: Clinical Applications in Health and Disease. I Care Press, Bethesda, MD, 2012].