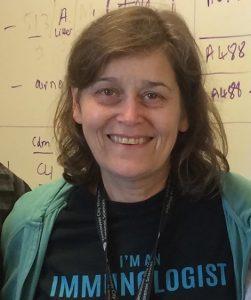 Pauline Johnson is an immunologist at the University of British Columbia.  Her research has focused on innate and adaptive immune mechanisms — in particular, the mobility of proteins in membranes, lymphocyte cell surface molecules, T cell signalling, leukocyte adhesion, and macrophages in lung inflammation and cancer metastases

Dr. Johnson helped to establish the function of CD45 as a critical protein tyrosine phosphatase in T cell activation, and defined the mechanisms regulating the interactions of the cell adhesion molecule CD44 with the matrix component, hyaluronan. Her current research uses mouse models of lung disease to study the function of macrophages and the cell matrix in infection, inflammation, and cancer.

She held an MRC Scientist Award and was Co-Director of the Infection, Inflammation and Immunity Research Group at the Life Science Institute at UBC (2003-2009). She has served multiple times on the CIHR Immunology and Transplantation panel, including as Scientific Officer, as well as on other national and international review panels. She is a member of the CIHR III Institute Advisory Board (III institute = Inflammation, infection and immunity CIHR Institute). She has received the Women in Science Award for Community Leadership and Scientific Excellence, Minerva Foundation for B.C. Women, 2013.  She is committed to her work in gender equity in science.

We are honored to have Pauline talking to us as our March immunologist of the month.

After completing a PhD in membrane biochemistry, I became interested in lymphocyte cell surface molecules and joined Alan William’s Unit who were making monoclonal antibodies against lymphocyte cell surface molecules. Although I was initially interested in understanding carbohydrate interactions on lymphocytes, I ended up purifying the rat CD8 molecule, using peptide sequence to clone the molecule. It was an exciting time in Immunology, as many new molecules were being discovered, including the T cell receptor, and I soon became hooked.

What do you find to be the most exciting new discovery in immunology?

There are still lots of unknowns in immunology, and lots of things we still don’t fully understand. Surprises abound, for instance, how did we miss a whole subset of lymphoid cells- the innate lymphoid cells (iLCs)? And for a long time, we thought tissue macrophages came from blood monocytes, only to find that certain tissue macrophages can self-renew without the need for blood monocytes.

What do you think are the most important skills to be a successful immunologist (first define what success is for you)?

I am not sure how to define success, perhaps having sufficient funds to carry out research in immunology, evaluate your ideas and test your hypothesis. Useful skills for success include: persistence, confidence (not too much, not too little), passion for science and discovery, creative thought, and careful analysis.

What is the most important advice you could give to someone that is just starting a career in immunology?

My advice involves the skills described above: believe and have confidence in yourself, follow your passions, don’t give up, keep an open mind, follow the evidence, and enjoy what you do.

What would you say a younger Pauline?

Keep the excitement and share your passion and knowledge, as you did. Next time, have more confidence in yourself and your ideas, and go for it!

Do you think we are making progress in EDI (Equality, Diversity and Inclusion) and why or why not?

Yes, we have made considerable progress since I started my post-doc over 30 years ago, but there is still more to be done. There is now more transparency and accountability, and more awareness of challenges that certain groups face. There is also more awareness of the issues and biases, but not always easy solutions.