A 53 year old male, originally from India, presented to the clinic for a renewal of his hypertension medication. On routine weighing it was noted that he had lost 8 kg in the last 6 months, which had been unintentional weight loss. Other then some mild lower abdominal pain, and some occasional testicular discomfort, he reported no other symptoms.

The patient had been diagnosed with hypertension 6 years before and had remained well controlled during this time attending clinic regularly for his 6 monthly check up and medication.

Although he had occasional mild abdominal pain over the last 6 months there was no accompanying vomiting or constipation but he did report some bouts of nausea. However no trigger was noted, and no particular frequency was observed. The 8kg weight loss had been unintentional, with no loss of appetite noted.

No urinary symptoms were reported including no dysuria, no retention, no frequency, no urgency, no nocturia and no haematuria.

On further questioning his testicular discomfort had been noted in both testes, with more tenderness on the right side. The testicles had increased in size slowly, but because they were not particularly painful the patient was not concerned. There was no penile involvement and sexual function was not affected. Infertility was of no consequence, he has 3 children aged 24, 27 and 30 years and he and his wife of 32 years had conceived easily and had not tried for further pregnancies.

An incomplete history was given of a diagnosis of Pulmonary TB 12 years earlier while still living in India. Although he was treated for TB he does not know what medication he was given, and treatment was only for four months. He remembers submitting a sputum specimen at four months, after which  his treatment was ended. Thereafter no further follow up was done.

His hypertension was diagnosed on a routine medical check up 6 years ago when he moved to South Africa. He has been on treatment since diagnosis and has remained well controlled.

A routine investigation for HIV was carried out 6 months ago for insurance purposes and was found to be negative.

Father and mother are both hypertensive and on treatment. No other significant family history.

Chest X ray, shows small cavity in the right upper lobe, and small area of calcification in the right middle lobe most likely a Ghon focus- in keeping with his previous history of pulmonary TB 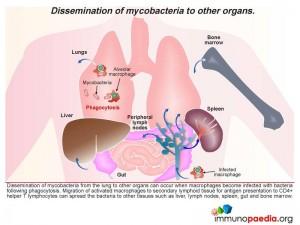 This case study explores the immunological manifestation of extra pulmonary TB. Although the lung in pulmonary TB is the most common site for Mycobacterium tuberculosis infections, dissemination of mycobacteria from a primary lung infection to other organs can occur when alveolar macrophages become infected with bacteria following phagocytosis. Mycobacteria have evolved adaptive mechanisms to evade destruction in macrophages and can survive in vacuoles. Migration of activated macrophages to secondary lymphoid tissue for antigen presentation to CD4+ helper T cells can facilitate spread of mycobacteria to other tissues such as the pleura, liver, lymph nodes, spleen, gut, bone marrow, brain and the urogenital tract. In immunocompetent hosts, mycobacterial dissemination to other tissues is usually controlled. However, due to the testis being an immune privileged site, it is likely that intracellular mycobacteria may have a survival advantage in this tissue.

In this case study, our patient was previously infected with pulmonary TB, which was treated but possibly sub-optimally.  His history was incomplete and opened questions to whether previous treatment was curative. It is possible that our patient was latently infected with TB and we assume that reactivated mycobacteria disseminated to the testes. 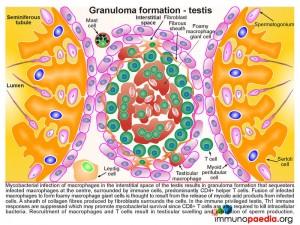 We outline below the main points about the pathology of extra-pulmonary testicular TB. Following infection of the testicular macrophages located in the interstitial space of the testis with mycobacteria, the infected cells  promote an immune response which results in the formation of  a granuloma . This serves to sequester infected cells at the centre surrounded by predominantly CD4+ helper T cells. The infected macrophages can fuse to form foamy macrophage giant cells, which are thought to result from mycolic acid products released from infected cells. A sheath of collagen fibres produced by fibroblasts then surrounds the cells.

In the immune-privileged testis, Th1 immune responses are suppressed and it is thought that this suppression promotes mycobacterial survival because CD8+ T cells which are required to kill intracellular bacteria are not recruited. Th1 helper T cells provide essential cytokine activation signals to CD8+ cytotoxic T cells. The build up of recruited macrophages and T cells is thought to result in progressive testicular swelling and disruption of sperm production. As noted in our patient there was development of gradual testicular enlargement. Whether this resulted in infertility is not known, as the patient originally became infected with TB after having children.

Apart from the testis, other immune privileged sites include the eye, brain and placenta and are so-called because of mechanisms of immune tolerance that operate to protect the tissues from immune-mediated damage. The following discussion we will focus on the testis.

In thetestis at the onset of puberty, new antigens are expressed during spermatogenesis and risk provoking an immune response because their development occurs after immune tolerance has been established. Mechanisms must therefore be in place to protect them. This is achieved in part by segregation of antigens in the seminiferous tubules from immune cells in the interstitial space by a layer of Sertoli cells connected by impermeable tight junctions which form a blood-testis barrier. However this physical barrier cannot account for all immune suppression in the testis because it is incomplete in the region called the rete testis, thus allowing for some exposure to antigen.. Thus other forms of immune suppression mechanisms are in place. 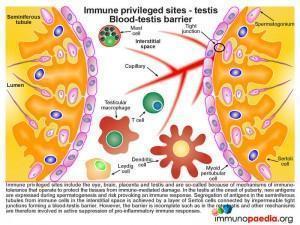 The primary goal of immune suppressive mechanisms in the male testis is to circumvent destruction of testicular cells or disruption of sperm production. Mechanisms known to operate in the protection of sperm cells from attack by cytotoxic immune cells such as natural killer cells and CD8+ cytotoxic T cells involve lack of expression of classical HLA class I A, B and C receptors and the induced expression of non-classical HLA E and G receptors. Sertoli cells also express cell surface ligands FasL and PD-L1 which promote apoptosis in activated T cells following engagement with their respective Fas and PD-1 receptors. In addition, Sertoli cells which are support cells, inhibit T cell proliferation by mediating depletion of tryptophan with IDO (indolamine 2,3-dioxygenase). Lack of tryptophan inhibits protein synthesis in activated T cells. 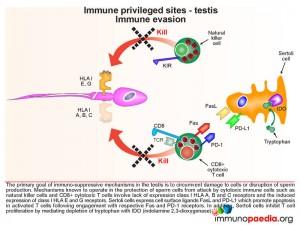 In the testis, cytokine production following activation of antigen presenting cells such as macrophages is skewed towards a “Th2-like”  immunoregulatory /immunosuppressive profile. Activated macrophages produce IL-10 and very little IL-12.  IL-12 is the cytokine required to stimulate T-cells to differentiate into pro-inflammatory  Th1 IFN-g and IL-2 secreting cells. Th1 helper T cells necessary to provide activation signals to CD8+ cytotoxic T cells. IL-10 is also a potent inhibitor of Th1 helper T cells and antagonize the production of IFN-g production. Additionally, Sertoli cells secrete Activin A that inhibits activated macrophages from producing pro-inflammatory cytokines such as IL-6 and TNF-a. Sertoli cells also secrete TGF-b that inhibits activated T cells from differentiating into cells with a Th1 phenotype. Finally, Leydig cells produce large quantities of testosterone which also has immunosuppressive properties. Due to the local production of testosterone in the testis, testosterone levels can be up to 10 fold greater than observed on blood. 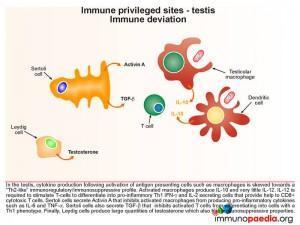 Lets go back to our patient. He was put on treatment for extrapulmonary TB with Rifampicin, Isoniazid, Ethambutol and Pyrozinamide, followed by seven months of maintenance therapy with Rifampicin and Isoniazid.

The patient is currently on maintenance therapy. The testicles decreased in size as a result of the testicular macrophages decreasing their burden of bacteria and a reduction in chemotactic recruitment of immune cells into the testicle.

What is an immune privileged site?

Immune privileged sites include the eye, brain, placenta and testis and are so-called because of mechanisms of immune tolerance that operate to protect the tissues from immune-mediated damage. These sites in the body are able to tolerate the introduction of antigen by limiting the  pro-inflammatory cell-mediated immune responses.

What immune response is suppressed in the immune privileged testis and how does this effect mycobacterium infection?

Why are sperm cells immunogenic?

The likely reason is that sperm cells mature at the onset of puberty, which is long after T cell immune tolerance has been established. It is thus likely that sperm is “seen” as foreign, resulting in immunity against sperm antigens.

What is the blood-testis barrier?

A physical cell barrier which is designed to contribute to the survival of sperm by segregating sperm antigens in the seminiferous tubules from immune cells located in the interstitial space. This barrier is formed by a layer of Sertoli cells connected by impermeable tight junctions

What are some of the other immune suppression mechanisms in place to help contribute to the testis being an immune privilege site?