In the first instalment of the International Union of Immunological Societies (IUIS) webinar series in collaboration with Immunopaedia and Frontiers Immunology, we were treated with a fascinating talk by Dr Kondwani Jambo titled – The unusual COVID-19 pandemic: the African story.

Dr Kondwani Jambo is a Group Leader based at the Malawi-Liverpool-Wellcome Programme (MLW). His research focuses on infection and immunity relevant to populations in low-middle income settings. He holds a Master of Science degree in Human Immunity (2006) and a PhD in Immunology (2010), from the University of Liverpool, United Kingdom. He underwent postdoctoral training at the MLW and Cornell University (USA). He is a previous recipient of the prestigious Wellcome Intermediate Fellowship (2015) and current recipient of the MRC African Research Leader award (2020). Dr Jambo is the current president of the Immunology Society of Malawi. 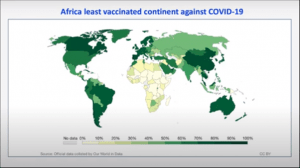 Focusing on the Malawi population, Dr. Jambo and his team reported, in an early paper, that the COVID-19 pandemic was less severe in Africa despite being the least vaccinated continent against COVID-19 (Figure 1).

Displaying more of his work he reported that the SARS-CoV-2 Omicron variants of concern (VOC) displayed milder symptoms than the SARS-CoV-2 Delta VOC, which was seen worldwide, also showing that neutralising antibodies against SARS-CoV-2 wane within 6 months (Figure 2). Based on genomic and serosurveillance data, Dr. Jambo showed that vaccination of adult COVID-19 patients induced a robust cross-reactive antibody response against SARS-CoV-2 VOC (Figure 3). 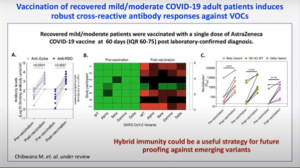 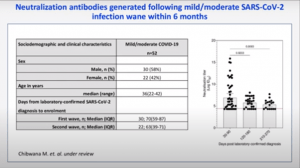 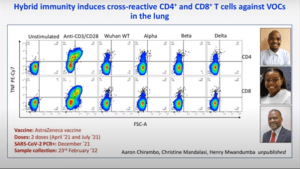 Working with a population that was mostly vaccinated, they further set out to established whether the vaccine induced hybrid immunity can be cross-reactive across other VOCs looking at CD4+ and CD8+ T cells in the lung. They were able to show sufficient cross-reactive responses against VOCs i.e. SARS-CoV-2 Wuhan wildtype, Alpha, Beta and Delta (Figure 4). This is preliminary data still to be validated with further studies.

Dr. Jambo summarised his talk so eloquently, concluding with a powerful statement, saying that COVD-19 vaccination policy should be tailored to local epidemiological situations/needs and not by having a “one-size-fits-all,” approach.  He further described possible reasons as to why COVID-19 is less severe in sub-Saharan Africa with age being a possible factor whereby, as an example, the average age in Malawi is 17.5 years of age.