I’ve been coughing for so long

Jade, 20 years-old, has had episodes of paroxysmal dyspnea since the age of 12, especially at night, associated with coughing and chest tightness, sometimes with wheezing. For 1 year now, attacks have been more frequent, almost daily, also occurring during the day.

This case study was provided by Prof. Olivier Boyer (M.D., Ph.D., head of the Department of Immunology and Biotherapy), Dr. Jérémie Martinet (Pharm.D., Ph.D., immunologist) and Dr. Guillaume Mahay (M.D., Ph.D., pulmonologist) from Rouen University Hospital, Normandy University, France. The authors would like to thank Prof. Winfried Pickl (Vienna, Austria) and Dr. Joana Vitte (Marseille, France) for their critical reading of this case study. We are grateful to Nikki Sabourin-Gibbs, Rouen University Hospital, for her help in editing the manuscript.

In the last year, Jade has had six episodes of acute dyspnea that required presentation to emergency room. Three months ago, she started a treatment combining a long-acting bronchodilator and a high-dose inhaled corticosteroid, as well as a short-acting bronchodilator on demand. This treatment provided some improvement between crises. Yet, she continues to have acute episodes of dyspnea several times a week, spontaneously or triggered by exposure to dust or to cat fur. After another severe episode, she decided to consult an allergist.

The allergist decides to switch her background treatment to a fixed inhaled combination of high daily doses of corticosteroids and Formoterol, plus an anti-leukotriene and a long-acting inhaled anticholinergic. To treat her allergic rhinitis, an antihistamine is prescribed together with a corticosteroid nasal spray. Jade is also prescribed sessions of therapeutic education with a written action plan in order to optimize her compliance to treatment.

Despite these progressive therapeutic adaptations, Jade reports that her condition is persistent and that she has had to present to the emergency room twice in the last 3 months

Figure 1. Pulmonary Functional Testing: The values of the curve below and above the x-axis represents inspiration and expiration of air. The solid line corresponds to the flow/volume measure of the patient overtime. The shaded area corresponds to the normal range around the average theoretical values.

TLC is normal, so there is no restrictive syndrome or chest distention.

Jade has an atopic background with a family history, a personal history of atopic dermatitis and allergic rhinitis. Her asthma symptoms are triggered by exposure to identified allergens to which she is sensitized. Therefore, Jade has asthma with type 2 allergic inflammation. Despite optimal observance, Jade’s condition remains poorly controlled and she experiences exacerbations of dyspnea. Additional treatments that have not improved her condition after several months have had to be discontinued. Jade’s treatment has been progressively increased according to international recommendations (Global Initiative for Asthma; GINA steps; Figure 1)1 with the prescription of a combined allergic ground and symptom treatment as advised. Therefore, Jade’s diagnosis is severe asthma according to the ERS/ATS definition2, justifying a biologic therapy such as Omalizumab.

The long-acting anticholinergic and antileukotriene treatment was discontinued as it had not led to any improvement. 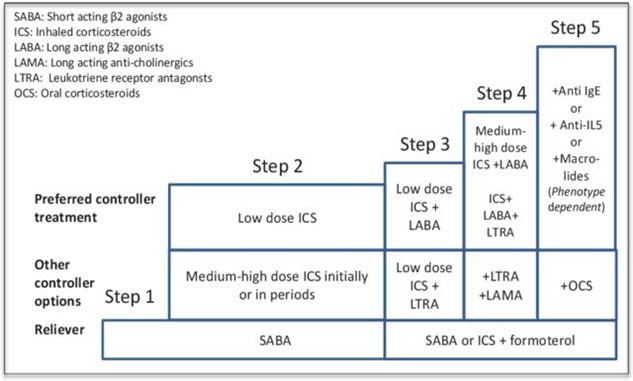 Jade has typical symptoms of poorly controlled allergic asthma. The diagnosis of asthma is attested by the existence of a reversible obstructive syndrome on pulmonary function test (PFT). Asthma is a chronic disease characterized by shortness of breath, chest tightness or pain, coughing and trouble sleeping due to coughing or wheezing. These symptoms are due to an inflammation of the airways in the lungs which affects the sensitivity of the nerve endings in the airways so they become easily irritated. During an asthma attack, the lining of the airways swells, causing the airways to narrow and reducing the flow of air in and out of the lungs. In allergic asthma, this chronic inflammation is caused by type I hypersensitivity against aeroallergens.

Allergens are antigens, that are either protein in nature or non-proteinaceous haptens bound to a protein carrier which induce type I hypersensitivity3. Type I hypersensitivity reactions are taken to be very immediate and “exaggerated” immune responses mediated by IgE (Abbas, Moussa and Akel, 2022). Aeroallergens are airborne allergens derived from pollen, animal dander, house dust mite and molds. Other more dangerous allergens include insect venom (Abbas, Moussa and Akel, 2022).. The response to the antigen can have two phases;

IgE bind to the high affinity FcεRI receptor constitutively expressed on mast cells and basophils. Thus, these cells become sensitized to the allergen. An inducible, incomplete form of FcεRI receptor can be expressed by other cell types, including eosinophils. In case of allergenic re-exposure, bridging of FcεRI occurs upon binding of the multivalent allergen to the IgE on basophils or mast cells, which triggers the immediate release of preformed mediators (biogenic amines, granule enzymes, platelet-activating factor, etc.). In a matter of seconds, this process leads to the production and subsequent release of leukotrienes, prostaglandin D2 and inflammatory cytokines,  and eventually to the clinical allergic reaction7 (figure 3).

Histamine is the major biogenic amine released by mast cells and basophils. Its action is time-limited due to the presence of amine-specific transport systems that rapidly clears them from the circulation (half-life 60 seconds). On endothelial cells, histamine causes an increase in inter-endothelial spaces by cell contraction and leakage of plasma into tissue causing edema. It also induces vasodilatation on small vessels. Histamine induces smooth muscle contraction, causing bronchoconstriction in asthma.

Tryptase is the major granule enzyme, preformed and packed in the same secretory granules as histamine, and released during mast cell degranulation. Tryptase degrades fibrinogen in vitro and activates collagenase, potentially contributing to tissue damage. Its proinflammatory effects contribute to the late phase of the allergic reaction. However, its functions in vivo are still under investigation8.

Lipid mediators such as prostaglandin D2 or leukotrienes are synthesized from arachidonic acid in the first hour after mast cell activation and induce vasodilatation and bronchoconstriction.

Finally, activated mast cells and basophils initiate de novo transcription and synthesis of inflammatory cytokines such as IL-1, IL-4, IL-5, IL-6, IL-13 or TNF. These cytokines maintain an inflammatory condition in the late phase of the reaction and further support a pro-Th2 environment. 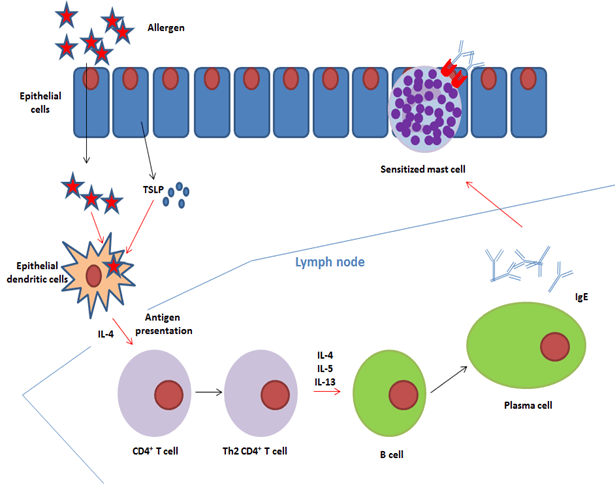 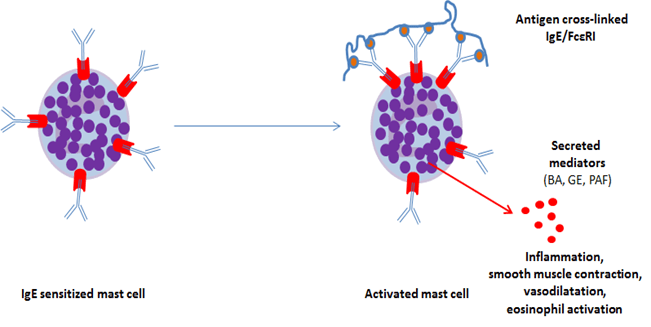 Omalizumab is a recombinant humanized IgG1k monoclonal antibody (molecular weight 149 kD) that selectively targets free human IgE and currently used to treat allergic asthma and chronic urticaria (Kumar and Zito, 2022). Omalizumab binds to a site in the C-epsilon-3 (Cε3) domain of each IgE heavy chain that is also involved in IgE binding to the high (FcεRI) and low (CD23) affinity receptors. This therapeutic antibody is produced by modified Chinese Hamster Ovary (CHO) cells.

Due to its mode of action, omalizumab initially tends to cause an increase in serum IgE levels. This is not only based on the reduced binding of IgE to FcERI, but also due to the stabilization of serum IgE by omalizumab binding. What is important in all this is that in highly sensitized individuals the therapeutic benefit of omalizumab treatment becomes apparent only after several weeks of therapy, and then when IgE on effector cells or even whole effector cells are replaced by new ones. Therefore, it is not unexpected for no clinical improvement to be observed in the first weeks of omalizumab treatment (apart from an apparently “paradoxical” increase in serum IgE levels).

Omalizumab is indicated in severe persistent allergic asthma with elevated total IgE. It is also indicated in the treatment of spontaneous chronic urticaria with elevated total IgE. Omalizumab, however, is taken to have different mechanisms of actions for treating both conditions(Kumar and Zito, 2022). Clinical trials and real-life experience have shown the good efficacy of this treatment and the low level of side effects.

Before the initiation of a treatment with omalizumab, a titration of serum total IgE is needed in order to calculate the dose to be injected into the patient according to her/his weight as well determine the frequency at which the medication is administered.

Currently, total IgE assays are not recommended to monitor treatment. Indeed, omalizumab binds to free IgE and may alter the concentration of total IgE by two opposite effects:

Furthermore, currently used routine IgE assays do not allow to differentiate between free and omalizumab-bound IgE.

Due to the possibility of anaphylaxis, patients on this medication are required to be under observation for a suitable period of time after taking this medication (Kumar and Zito, 2022). 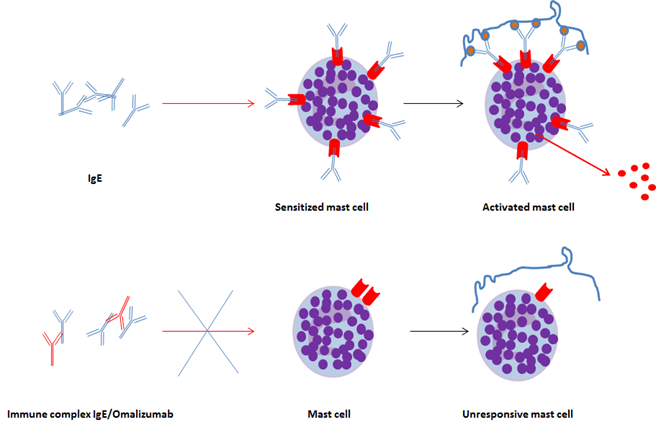 During the first 2 months of treatment with omalizumab, no clinical benefit was noted regarding the frequency or the severity of asthma episodes. Since the third month, Jade started to feel gradually better and, after 4 months of biologic therapy, she has experienced no more episodes of dyspnea. Her ACQ score normalized to 0.23 and her pulmonary function tests significantly improved. Because of the excellent clinical response, Jade’s treatment with omalizumab will be maintained in the long term.

What is the main cytokine responsible for IgE switching in B cells?

What are the main effects of histamine in asthma?

Explain how mast cells are activated by allergens

What is the main mechanism of action of omalizumab?

Why are total IgE immunoassays not recommended for monitoring the biological efficacy of omalizumab in patients under therapy?

Omalizumab prevents the effector function of allergen-specific IgE on basophils and mast cells, but does not reduce IgE production by B cell-derived plasma cells. Furthermore, current routine total IgE assays do not differentiate between free IgE and IgE complexed to omalizumab. The results of such assays may therefore be misleading.