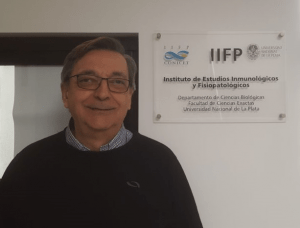 Prof. Dr. Carlos Alberto Fossati is an Emeritus Professor of Immunology at the Faculty of Exact Sciences of the National University of La Plata (UNLP), Argentina and Superior Researcher at the Argentinean National Scientific and Technical Research Council (CONICET). He has worked in the field of Brucellosis* and has received many scientific prizes and awards, including “Xeme Grand Concours International 1978”, Académie Internationale de Lutèce, Paris, for his PhD thesis, and has been recognized for his trajectory by the Argentinean Society of Immunology (SAI) and the Argentinean National Academy of Pharmacy and Biochemistry.

What is your scientific background? What have you studied and why did you decide to pursue immunology as your research interest? My undergraduate training was in Biochemistry, which I studied in La Plata, instead of Buenos Aires because the capital city was too big and noisy for me, while La Plata was much quieter, less impersonal and I had treasured my father’s experiences as a student in this (La Plata) city. Immunology was not part of the curriculum of Biochemistry subjects, but some very elementary aspects were seen in various courses, and it began to interest me. In the last stages of my BSc training, we met a Biological Chemistry professor working in Immunology, Dr. Moisés Spitz, who dictated some basic aspects of the discipline. I found it tremendously interesting and challenging, and it strongly influenced my decision to embrace that specialty.

What was it like to work in immunology when you started? Immunology in the late 1960s was very primitive compared to our current knowledge. Moreover, there were very few textbooks written in Spanish and, back then, the vast majority of students had little or no understanding of English, so access to elementary knowledge was difficult. Introductory knowledge could be read in microbiology books, some of which had a couple of chapters on immunology and immunochemistry. You could also find some topics in Hematology textbooks. Most of the laboratories where scientific activities were carried out had little equipment, a very low budget and, generally, the number of researchers was very low.
I began working on the search for soluble “humoral” factors capable of transmitting information between cells of the immune system. A few years before the characterisation of interleukins, interferons, etc. began, the Major Histocompatibility Complex was classified based on serology and knowledge of the generation of antibody diversity was in its infancy. The monoclonal antibodies were just myeloma proteins.

How has your research contributed to better understanding your research area? My PhD work contributed to understanding of the importance of intercellular linkages beyond cell to cell interactions. It helped me appreciate the importance of genetics in the generation of the immune response and its relationships with pathologies of immunological origin. Perhaps more importantly, my PhD work consolidated my vocation for Immunology, scientific activity and the transmission of knowledge of the discipline.

You have endured a lot of different periods of political turmoil in Argentina since you began your career. Do you want to tell us some anecdotes? Do you have some advice for the newcomer scientists? Yes, unfortunately there were many, some very hard, several romantic or ridiculous, when seen from the distance, and others deeply tragic. For instance, to run as fast as lighting to escape the police horses, or to submit writings for the release of recently detained comrades in some march, demonstration, or meeting. Also, withstanding real tear gas bombs fired into the facilities of the Faculty, or having the Faculty -and the University itself- closed because it was previously taken over by “task forces” of recognizable or unofficial and anonymous origin. As well as lists of teachers “not confirmed” in their positions, persecutions, disappearances, murders, etc.
All these periods were disastrous from any point of view. They attacked the quality of education, delayed scientific and technological advances, harmed public health, violated human rights, and impoverished the country, among many other negative effects.
I think the only thing that can be advised, without fear of mistakes, is that scientific / technical / teaching activity requires determination, passion and a lot of work. Desire, pleasure and intelligence, although very important factors, are not enough without the others.

You have traveled a lot during your career. Do you have some preferred places or stories that you want to share? I have travelled a bit for work reasons. Without a doubt, the most relevant one has been when I was a Post-Doctorate researcher for just over two years in London. It was important because it allowed me to acquire new and very modern knowledge, I learned how to handle new methodologies and it gave me the security and conviction that I could transfer these novelties back to Argentina. I must emphasize that there (London) I worked hard on the production and characterization of monoclonal antibodies and their use in various aspects of basic immunology, application to viral and parasitic infections, among others.
After returning to Argentina I was able to achieve the objective of applying my new experiences and knowledge here (Argentina). In our Faculty, that goal was accomplished with the organization of the Chair of Immunology as a discipline recently incorporated as a specific subject in the Biochemistry degree curriculum. We formed an Immunology laboratory, that is currently an institute of the UNLP and CONICET, where several (research) topics were developed and in which research is still ongoing: celiac disease, allergies and hypersensitivity, lysosomal diseases.
Simultaneously, in Buenos Aires I was able to consolidate a research group in the Faculty of Biochemistry and Pharmacy of the University of Buenos Aires, (IDEHU-UBA-CONICET). There it was possible to determine, through the study of various monoclonal antibodies, that the same cell clone could simultaneously produce normally glycosylated and asymmetrically glycosylated antibodies, in different proportions depending on the hybridoma and verified their differential immunochemical behaviour. We introduced a line of work in brucellosis sp., which began with the generation of monoclonal antibodies for the detection of Brucella spp. antigens. Then research was expanded to various aspects of the study of the disease including immunopathogenesis, treatment monitoring, and vaccine development. From this topic there was a great formation of human resources that dispersed and diversified into various groups and laboratories. We also work on Chagas disease, among others.
Our research groups are among the pioneers on the subject of monoclonal antibodies in our country. In both Universities, important human resources were and are being trained, who bring their capacities into teaching and scientific-technological research of a very good level.
It is worth noting that we were fortunate to establish collaborative work with various laboratories in our country and abroad that contributed significantly to our achievements.
This experience abroad was transcendental not only because of the technical and scientific possibilities it opened to me but, and perhaps more importantly, it taught me to live and exposed me to another culture, a different way of life, to adapt to other values. It helped, and a lot, to broaden my vision of the world, to see one’s own country in a different way.

Can you give some advice to early stage immunologists? To study and work very hard.

Thank you for your time and for sharing your experience.