A case of scaly annular plaques

A 45 year old male is referred from outpatient clinic to a hospital dermatology department with well dermacated erythematous scaly annular plaques, scattered on his trunk, face and scalp, which is not responding to conventional psoriasis treatment.

History revealed that the patient had suffered from psoriasis for the past 6 years. During this time he was under the care of a general practitioner who treated his psoriasis with oral and topical steriods- without any improvement. Following these 6 years of treatment without relief the patient was referred to specialist care. At the Dermatology outpatient department of a tertiary hospital the patient was started on different topical therapies which included Dovonex ointment, a synthetic Vitamin D3 derivative, and UV phototherapy. However, despite months of follow ups and treatment adjustments he still remained poorly controlled. Now at his 12 month visit he has been admitted to hospital due to a severe flare up of psoriasis. He has been initiated on topical Anthralin (dithranol) in addition to his current treatment while continuing UV phototherapy. 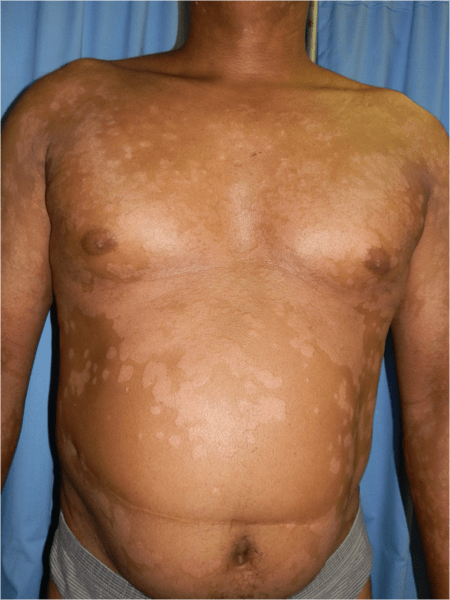 On Admission: blood results were unremarkable

Due to the unusual morphology of some of his lesions on the upper back, being tumour like, a skin biopsy was performed to  exclude Mycoses Fungoides (MF), but the skin biopsy confirmed Psoriasis

Skin sections show a heavy neutrophilic crust with both hyperkeratosis and parakeratosis overlying a spongiotic and acanthotic epidermis. There is chronic inflammatory infiltrate of lymphocytes and scattered neutrophils in the superficial dermis, but no lichenoid infiltrate noted. These histologic features are in keeping with Psoriasis.

Our presenting case is that of a 45 year old man with well demarcated erythematous, scaly, annular plaques, scattered on his trunk, face and scalp, consistent with psoriasis. For several years his disease was poorly managed. More recently he has received appropriate therapy with topicals and phototherapy but has remained refractory to treatment, necessitating the need for systemic medication.

To begin our discussions on the development of psoriasis we will start with an overview. Psoriasis is a complex, chronic, multifactorial, inflammatory disease that involves hyperproliferation of the keratinocytes in the epidermis. The disease manifestation is thought to be the result of an interplay between a genetic predisposition and a range of environmental factors (triggers)including injury, infection, allergy, extremes of temperature, alcohol use, chemicals or stress, resulting in an inflammatory response. Furthermore different clinical patterns of psoriasis are described, each thought to have a specific etiological mechanism:

For the ease of demonstrating the development of psoriasis our discussion and graphics have remained general with Psoriasis vulgaris as our chosen clinical pattern and infection as the inflammatory trigger. However we will indicate when a specific etiological factor has been identified. 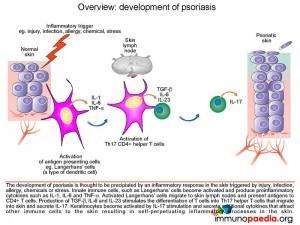 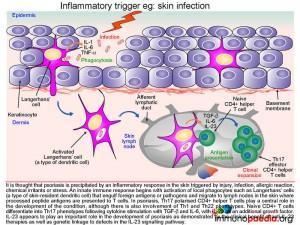 The activated Langerhans’ cells then migrate to skin lymph nodes and present antigens to CD4+ T cells. The phenotype of activated CD4+ T cells is dependent on the type of cytokines produced by the antigen presenting cells. Although Th1 and Th22 CD4+ T cells also participate in the inflammatory response, Th17 cells have been shown to play a central role in the development of psoriasis due to the secretion of IL-17A and IL-17F. The differentiation of naïve CD4+ T cells into Th17 CD4+ T cells results from cytokine stimulation by TGF-b and IL-6. Additional enhancement of Th17 CD4+ T cell development occurs by additional stimulation by IL-23.Activated Th17 CD4+ T cells clonally expand and migrate out of the lymphoid tissues and extravasate into the dermis where IL-17A and IL-17F is produced. IL-17A and IL-17F activates keratinocytes which in turn secrete cytokines, attracting and recruiting more immune cells and in so doing setting up a self-perpetuating inflammatory process in the skin. These mechanisms of differentiation, extravasation, activation, secretion and recruitment will be discussed here in further detail. 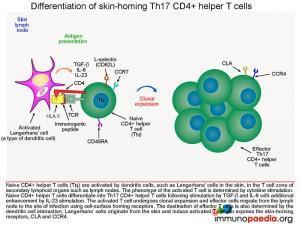 Following activation of Langerhans’ cells in the T cell zones of the skin lymph nodes, the group of cytokines secreted by the Langerhans’ cell will determine the phenotype of the activated T cell. In this case, TGF-beta, IL-6 and IL-23will cause naïve CD4+ T cells to differentiate into Th17 CD4+ helper T cells. These activated T cells then undergo clonal expansion with the resulting effector cells migrating out of the lymph node to the dermis of the skin 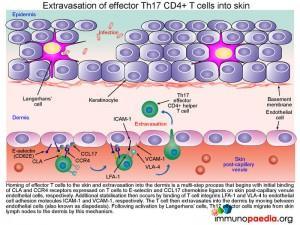 Homing of Th17 effector CD4+ helper T cells to the skin and extravasation is a multi-step process that begins with initial binding of CLA andCCR4 receptors expressed on T cells to E-selectin and CCL17 chemokine ligands on skin post-capillary venule endothelial cells, respectively. Additional stabilisation then occurs by binding of T cell integrins LFA-1 and VLA-4 to endothelial cell adhesion molecules ICAM-1 and VCAM-1, respectively. The T cell then extravasates into the dermis by diapedesis. Completing the migration of Th17 effector cells from skin lymph nodes to the dermis, where activation of keratinocytes will now take place. 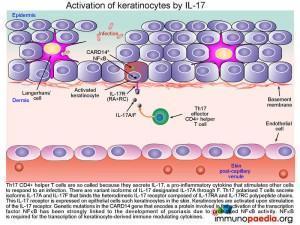 Activation of keratinocytes by IL-17

The Th17 CD4+ helper T cells, which have migrated into the dermis, are so called because they secrete the pro-inflammatory cytokine IL-17. Pro-inflammatory cytokines stimulate other cells to respond to an infection. There are variant isoforms of IL-17, currently six have been identified and designated IL-17A through to F. Th17 polarised T cells have been found to secrete the isoforms IL-17A and IL-17F and bind the heterodimeric IL-17 receptor composed of IL-17RA and IL-17RC chains. This IL-17 receptor has been found to be expressed on epithelial cells such as keratinocytes,that become activated upon stimulation of the IL-17 receptor. 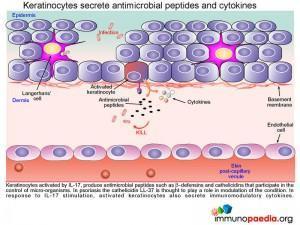 Once keratinocytes are activated by IL-17 they go on to produce and secrete various antimicrobial peptides and  immunomodulatory cytokines. Antimicrobial peptides such as beta-defensins and cathelicidins have been identified as playing a role in the control of micro-organisms. In particular cathelicidin LL-37 is speculated to have a disease modifiying function in psoriasis. The various immunomodulatory cytokines produced and secreted by keratinocytes and their role in the disease process will be discussed here in further detail. 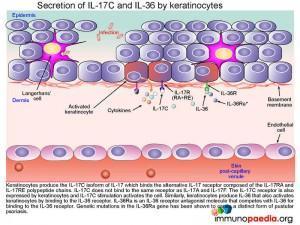 Once keratinocytes are activated by IL-17 they go on to produce and secrete various antimicrobial peptides and  immunomodulatory cytokines. Antimicrobial peptides such as beta-defensins and cathelicidins have been identified as playing a role in the control of micro-organisms. In particular cathelicidin LL-37 is speculated to have a disease modifiying function in psoriasis. The various immunomodulatory cytokines produced and secreted by keratinocytes and their role in the disease process will be discussed here in further detail.

Secretion of IL-17C and IL-36 by keratinocytes 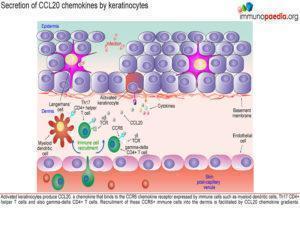 Secretion of CCL20 chemokines by keratinocytes

Activated keratinocytes produce CCL20, a chemokine that binds to the CCR6 chemokine receptor expressed by immune cells such as myeloid dendritic cells, Th17 CD4+ helper T cells and gamma-delta CD4+ T cells. Recruitment of these CCR6+immune cells into the dermis is facilitated by CCL20 chemokine gradients. 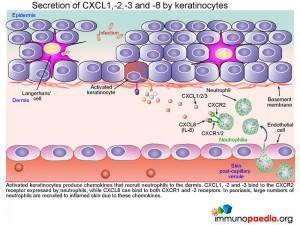 Activated keratinocytes produce chemokines that recruit neutrophils to the dermis. CXCL1, -2 and -3 bind to the CXCR2 receptor expressed by neutrophils, while CXCL8 can bind to both CXCR1 and -2 receptors. In psoriasis, large numbers of neutrophils are recruited to inflamed skin due to these chemokines.

Clinically this inflammatory infiltrate of neutrophils seen in the superficial dermis, is a histologic feature in keeping with the diagnosis of psoriasis. 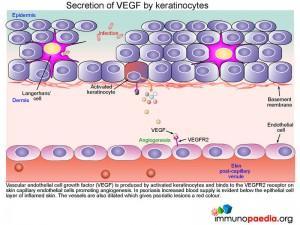 Secretion of VEGF by keratinocytes

Clinically this is in keeping with the positive Auspitz sign which is seen as capillary bleeding occurring after overlying scale removed typically seen in cases of psoriasis. 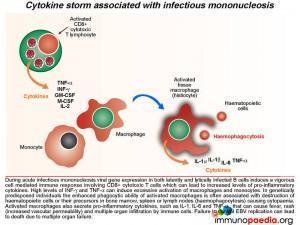 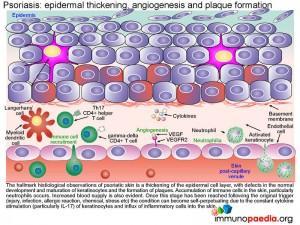 The hallmark histological observation of psoriatic skin (see Figure 2 below) is a thickening of the epidermal cell layer, with defects in the normal development and maturation of keratinocytes and the formation of plaques. Accumulation of immune cells in the skin, particularly neutrophils occurs along with an increa 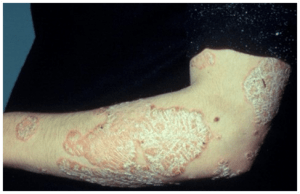 Once this stage has been reached,irrespective of the trigger, the condition becomes self-perpetuating due to the constant cytokine stimulation (particularly IL-17) of keratinocytes and ongoing influx of inflammatory cells into the skin.

Please note: specific treatment options are available as targeted treatment of psoriasis. The mechanisms of how these various therapeutic agents act to reduce disease symptoms will be available in a future case study presentation.

As patient was not tolerating appropriately administered conventional psoriasis treatment with topicals and phototherapy, he was switched to systemic treatment using Methotrexate (MTX) 25mg per week.  He was also started on Folic Acid supplements

Good response on commencement of MTX. He was last seen,  6 months after starting MTX  and continues to be notably improving,  with a PASI E2S1I1, BSA5-10%

What was the final diagnosis?

Which innate immune cells become activated in the skin following some form of environmental exposure?

Th17 cells play a central role in the development of psoriasis due to the secretion of IL-17A and IL-17F. IL-17A and F are produced from activated Th17 CD4+ T that have migrated into the dermis. Here IL-17A and F activate keratinocytes to secrete cytokines, which results in a self-perpetuating inflammatory process as immune cells are attracted and recruited to the skin.

What determines the migration of Th17 CD4+ T cells to the dermis?

Homing of Th17 effector CD4+ helper T cells to the skin is determined by the CCL17 chemokine gradient. Once the cells have moved to the skin, these cells then bind to E-selectin and CCL17 chemokine ligands on skin post-capillary venule endothelial cells using CLA andCCR4 receptors expressed on T cells, respectively.

What antimicrobial peptides are produced by keratinocytes after IL-17 stimulation?

Antimicrobial peptides such as beta-defensins and cathelicidins have been identified as playing a role in the control of micro-organisms. In particular cathelicidin LL-37 is speculated to have a disease modifiying function in psoriasis

Which genetic mutation has been shown to cause a form of pustular psoriasis?

There was a heavy neutrophil infiltration seen on the patient, what causes the recruitment of neutrophils to the inflammed skin

Activated keratinocytes produce CXCL1, -2, and -3 which bind to CXCR2 on the surface of neutrophils.