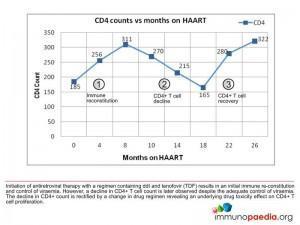 In this series of graphics we describe how the initiation of antiretroviral therapy with a regimen containing, in part, Didanosine (ddI) and Tenofovir (TDF) results first in immune re-constitution and viraemic control. Then after a short time how this is followed by a decline in the CD4+ T cell count despite the adequate control of viraemia. Finally how the CD4+ count recovers and is rectified by a change in drug regimen revealing an underlying drug toxicity effect on CD4+ T cell proliferation.

The graphics further depict how ddI and TDF are metabolised and interact to ultimately cause impairment of DNA synthesis and cell apoptosis following mitochondrial toxicity.