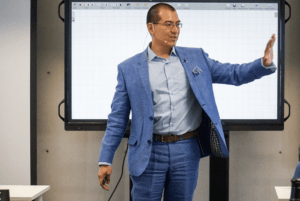 This month we have a special interview/feature on Julio Lenin Domínguez Ramírez. Prof. Ramírez was one of the faculty members at the IUIS-ALAI-SMI-Immunoinformatics Course 2019. A special article was written highlighting his talk and interview during the course. “From molecular biology to computer science”

“Among the Nobel laureates […] we see many profiles of people who have made incredible contributions in science,” Lenin Domínguez Ramírez, PhD, specialist in structural bioinformatics, said in an interview. Domínguez has devoted a large part of his career to structural biology that allows the study of the structure of biomolecules to understand how it relates to biological function.

He presented a talk on “B cell epitopes prediction using docking” at the IMMUNOINFORMATICS 2019 course. One of the attendants of the course Juan Carlos Balandrán, (leukemic tumoral microenvironment specialist) said ” Domínguez talk highlighted the different platforms for performing structural biology focusing his talk on the prediction of epitopes through docking or molecular screening”. During his session, Domínguez spoke about structural biology and the process of computational molecular coupling known as docking. This technique allows the analysis of the structure of molecules and helps predict, for example, if two molecules can join and also how strong this interaction will be. The importance of this area of study relies in its application in drug design and protein engineering. During his session, Domínguez shared his experience with different structural biology platform using animation, as well as gave clear explanation on the utility of these platforms and how he has used them for his research.

Balandrán considered all the tips Dominguez shared to do these type of studies very valuable, he highlighted the following tips:

Lenin Domínguez studied a bachelor’s degree in basic biomedical research, which gave him first-hand experimental research experience. During his time working at the laboratory of Prof. Gómez Puyou at the Institute of Cellular Physiology of the UNAM, Domínguez  said in an interview: “there were always properties, measures in the wet experiments that disagreed and the recurrent question was, why? What information is missing from the structure that makes it impossible for us to interpret a computational experiment as the wet one?” For a theorist, a wet experiment refers to those that are done with pipettes and test tubes. At that time, Domínguez complemented his experimental or “wet-lab” work with studies of molecular dynamics, where he could compare the proteomic functions through computer simulations.

In his presentation Domínguez explained, “[Computational simulation] is a very unusual experiment,” while making a comparison between an ELISA test (common in clinical laboratories to determine whether a patient has an infection or an autoimmune disease) and a docking test having the same molecules, an antigen and an antibody. In an ELISA test, “one does not have an antigen and an antibody, but a concentration of molecules. Whereas in computation you have only two [molecules]”. These differences explain why “when you compared them, you might get different result, and you have to take that this into consideration when you interpret the results.”

He explained that this does not mean that one or another strategy is better or worse, it means that to make the interpretation it is important to distinguish the differences between type of experiments. In addition, said the scientist, the capacities of the programs or software,  and their limitations must be known. Finally, we must bear in mind that “there will be questions from a wet experiment that you can’t answer with an in silico experiment”. He gave a very good analogy, “[For example] imagine that computational tools are similar to a shoemaker’s toolkit. There is not a single hammer, there are many hammers because they are specialized for a specific function in the manufacture of the shoe. Computational tools are very specific […] not only in the training required to use them but also in how to interpret them”. Therefore, “there is not one [tool] that you can use for everything”, instead the “brain […] itself is a very general tool that we can use for everything”. In conclusion, none of the two types of experimentation has less or greater value, the really important thing is that its validity falls on the scientific rigor of the person doing the experiment during all its stages, including planning.

Dominguez spoke about the great computing power already available, but considered that much more workshops such as ImmunoInformatics are required so that people can know and become familiar with these tools. Therefore, he has launched a YouTube Channel where he explains step by step how to use some platforms, with aim of reaching more students and growing increasing interest and use of bioinformatics.

In an interview he explained that one of the reasons for making tutorial videos was that he had to “self-learn using emails, blogs, tutorials. [So] I would also [like to] make available what I have learned”. He highlighted the importance of “letting everyone raise their questions and try to find answers” because for him it has been one of the main inspirations in his professional trajectory that is reflected in his career.

“From where I started, in a clearly more oriented experimental career, in an institute where a lot of immunology is done, I ended up doing things that would seem to be un-related but it is a circle. Now I’m talking about antibody-antigen interactions that I didn’t learn so well when I was bachelor. Degree student” .

Interview by Ingrid M. Tinoco-Berrios for the Center of Complexity Sciences (C3-UNAM) (translated by Jennifer Enciso)