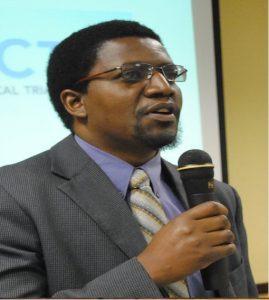 This month’s immunologist of the month is Professor Takafira Mduluza, Senior Lecturer at the Biochemistry and Biotechnology Department at the University of Zimbabwe. Prof. Mduluza graduated from University of Zimbabwe with degrees in Applied Biology and Biochemistry and Master of Philosophy in Biochemical Immunology of parasitic infections. He then proceeded on to doctoral studies in biochemical immunology and parasitology at the University of Glasgow, UK, with a special focus on the biochemical immuno-epidemiology of schistosomiasis at humoral and cellular level. He began working on the immunology of schistosomiasis in 1992, as a member of the senior scientific staff at the Blair Research Laboratories (National Institute of Health Research) in Zimbabwe. In 1999, he moved to the University of Zimbabwe as a Lecturer. His research aims to characterize the induction and regulation of effector mechanisms of innate and acquired immunity to infecting agents, and how they promote parasite clearance without inducing immunopathology. He also conducts research oriented to the development and evaluation of anti-parasite vaccines. He has contributed to the development of policy to tackle some of the health challenges in Zimbabwe. Takafira has also led teams that developed the baseline surveys and data/information that resulted in the introduction of a National policy on Neglected Tropical Diseases in Zimbabwe.

Why is Schistosomiasis still such a big health problem in developing countries? So far, the outputs obtained from several researches in resource limited communities reveal that there is high prevalence of Schistosomiasis infection. Schistosomiasis infection is causing morbidity in all age groups including children below the age of 5, although infection was considered to be rare in children <5 years old. In some children and individuals many other coinfections have been identified showing that the communities are neglected by their local leadership and the donor communities. Compounded by natural disasters it appears that in most of the sub- Saharan regions endemic for Schistosomiasis, are in difficult situations due to deteriorating social services and services development. In most areas the communities lack access to clean water for household use while sanitation has deteriorated further after improvement during the last decade of the 19th century. Cash crops that used to alleviate resources to improve water and sanitation provision at household level have been affected by the low prices and climate change. Most of the communities in rural areas survive on open water sources for all domestic use. Thus, these living conditions remain issues for the successful elimination of Schistosomiasis.

How has your research contributed/impacted the field of Schistosomiasis immunology? Prof Paul Hagan from the University of Glasgow who mentored me once said, “Understanding immunology has to be learned like adaptive immunity which matures with years.” It was only after 12 years that I realized the correlates of Schistosomiasis immunity essential to confer protection. However, my research further delved into the field of cellular immunogenetics revealing that the network of the cells and the cytokines produced control the final expressed immune phenotype in health or disease. My research has reported how immune responses are controlled by years of exposure and how the environment has a bearing on cytokine polymorphisms. The cytokine mutation sculptures the resistance or susceptibility to schistosomiasis infection.

What would you say is your proudest scientific achievement? My most notable achievement is leading the national NTD task force to conduct mapping of the four common NTDs in Zimbabwe (Schistosomiasis, Lymphatic filariasis, Soil transmitted helminths (STH) and Trachoma). The work involved conducting regular monitoring and evaluation of the mass treatment that was administered annually over 6 consecutive years. The work led to an award for Outstanding Research on maintaining and monitoring good health by the Research Council of Zimbabwe.

What have your biggest challenges been so far in your research? Obtaining meaningful financial support for my research group where there are limited resources (equipment and reagents) from the local institution including the lack of support for University staff and students who are provided with minimum support/stipend. Due to economic hardships affecting all sectors of the Zimbabwean economy very little or no support is invested into manpower as was years ago.

Advice for grad students and early career scientists: The immunology field is lucrative with a lot of opportunities to impact lives. The career is not instantly built but takes a lot of devotion and years of consistent hard work.