Keep up while the storm is raging

Norberto, a 23-year old white male in his third relapse of a B cell acute lymphoblastic leukemia (B-ALL) has been treated with an infusion of autologous CD19 Chimeric Antigen Receptor (CAR) T cells (CAR-T cells). Ten days later, he felt severe discomfort in the middle of the night, waking up sweaty with high fever, nausea and pain all over his body. He was immediately transferred from the department of hematology to the intensive care unit.

When he was 20 years old, Norberto consulted for dyspnea and fever. For the last two months, he has been pale and exhausted for no apparent reason, has lost weight unintentionally and noticed he was easily bruising. Chest X-ray revealed acute pneumonia; while blood cell counts showed high lymphocytosis and pancytopenia (anemia, neutropenia, thrombocytopenia); bone marrow smears and flow cytometry analysis established the diagnosis of CD19+ B-ALL. Despite achieving a complete remission (CR) after frontline chemotherapy, the patient experienced relapse of his B-ALL after two years. Subsequently, he was treated by rituximab, ifosfamide, carboplatin, and etoposide (RICE) chemotherapy. A second CR was achieved. An allogeneic hematopoietic cell transplantation could not be performed because of there was no a suitable HLA-matched donor. A second relapse occurred 8 months later, for which he was enrolled in a clinical trial investigating a new combined chemotherapy to which he only partially responded.

After this new therapeutic failure, he was admitted to the transplantation unit of the department of hematology to receive a dose of 1.2 x 106/kg autologous CD19 CAR-T cells after a conditioning regimen comprising fludarabine and cyclophosphamide. Afterwards, Norberto then remained hospitalised for monitoring and surveillance of short-term complications.

Quantification of his CAR-T cells was determined using polychromatic flow cytometry from a peripheral blood sample. From this analysis, he had 17.1 % of circulating CAR-T cells among his CD8 T cells (Figure 1). 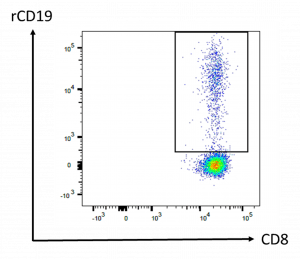 Ten days after his CAR-T cell infusion, the episode that Norberto is facing is grade 2 cytokine release syndrome (CRS) with fever, evocative clinical signs, presence of CAR-T cells in the blood, elevated C-reactive protein and interleukin-6. This complication was favoured by a high disease burden, i.e. here the presence of circulating blasts. Besides, as a consequence of the conditioning regimen, he has anemia and neutropenia for which he received prophylactic intravenous antibiotics. The lymphopenia is due to lympho-depleting conditioning. Besides T-cell depletion that recovers within few weeks after lympho-depleting conditioning, B cell aplasia (i.e., B cells would be undetectable if assayed) will last due to the cytotoxic action of the CAR-T cells that target CD19, a surface antigen expressed on malignant B cells but also on normal B lymphocytes. Hence, B cell numbers provide a surrogate marker of CAR-T cell efficacy. Since B cells represent only ≈10% of circulating lymphocytes in physiological conditions, their absence in the blood has little impact on T cell counts and does not provoke lymphopenia per se. B cell aplasia in CAR-T cell treated patients is an indication for a preventive treatment with intravenous polyvalent immunoglobulins in order to maintain a protective humoral immunity.

CAR-T cell therapy is an innovative treatment in which the patient’s own T cells are redirected toward cancer cells. CAR expression by T cells is provided by gene transfer using a gamma-retroviral or lentiviral vector. CAR-T cell therapy has provided a significant clinical benefit so far in patients with refractory or relapsed B-ALL or CD19+ lymphomas, i.e. typically 80-90% remission and 40-50% long term survival, in individuals who would otherwise have a very poor prognosis1,2. If  CAR-T cells persist in the body, they provide long term protection and prevent a further relapse of the hematological malignancy. It is a highly personalised treatment, only available in specialised centers.

Antigen recognition is provided by the extracellular part of the CAR which comprises the antigen-binding domain (single chain variable fragment, scFv) of an antibody specific for a tumor antigen, here CD19 expressed by B-ALL cells and normal B cells. The scFv moiety of the CAR is fused to a transmembrane region and to one or more signal transduction units. This allows activation of the transgenic CAR-T cells after they bind to CD19-expressing cells. Unlike conventional T cells, these genetically-engineered T cells kill target cells after recognition of a native antigen at the cell surface independently from major histocompatibility complex (MHC) requirement.

Hence, the CAR includes 3 main domains: one for antigen binding (scFv), one for T cell activation (the ζ chain of the CD3 complex, providing signal 1 of T cell activation) and one for co-stimulation (providing signal 2 of T cell activation) such as the intracellular domain of CD28 or 4-1BB (Figure 2). There is currently intense basic and clinical research aimed at developing new CAR vectors with different antigenic specificities (CD22, BMCA, CD123…) in order to transduce autologous or allogeneic TCRab T cells or even other type of immune cells (TCRgd T cells, NK cells…)3. 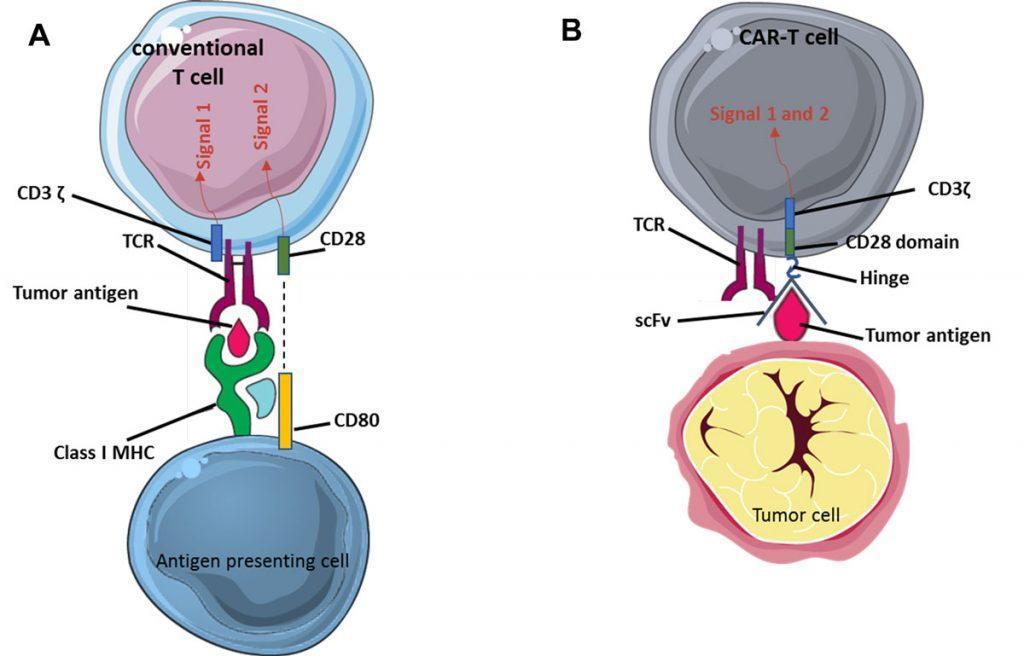 Figure 2: Principle of CAR-T cells. (A) Activation of conventional T cells. Recognition of a peptidic antigen presented by a molecule of the major histocompatibility complex (MHC, i.e. an HLA molecule in humans) by the TCR/CD3 complex provides signal 1 of T cell activation (only the ζ  chain of CD3 is represented here). Co-stimulation (signal 2) is provided to the T cell by molecules such as CD80 on the antigen-presenting cell. (B) In CAR-T cells, the single chain variable fragment (scFv) of the chimeric antigen receptor (CAR) recognises the tumor antigen independently of MHC restriction. Activation motives contained in the intracellular moiety of the CAR directly provide signal 1 (CD3ζ ) plus signal 2 (CD28 or 4-1BB), leading to strong activation of the CAR-T cell.

These immunotherapeutic strategies have recently been carried forward into clinical application and have shown impressive therapeutic efficacy in several hematologic malignancies, such as B-ALL and diffuse large B cell lymphoma (DLBCL). KYMRIAH™ (tisagenlecleucel, CD19 CAR-T cells) is an FDA/EMA-approved CAR-T cell therapy with market authorisation for the treatment of adults with relapsed or refractory DLBCL and young patients up to age 25 with relapsed or refractory ALL. YESCARTA™ (axicabtagene ciloleucel, CD19 CAR-T cells) is the second FDA/EMA-approved CAR-T cell therapy for treating adult patients with relapsed or refractory large B-cell lymphoma after two or more lines of systemic therapy, including DLBCL, primary mediastinal large B-cell lymphoma and high grade B-cell lymphoma. TECARTUS™ (brexucabtagene autoleucel, CD19 CAR-T cells) has then received FDA approval for the treatment of mantle cell lymphoma. Such innovative treatments in which the “drug” is composed of genetically-modified cells belong to the category of Advanced Therapy Medicinal Products (ATMP). They are produced in authorised laboratories under Good Manufacturing Practices (GMP).

Patients who are eligible to CAR-T cell therapy undergo the following procedure (Figure 3): 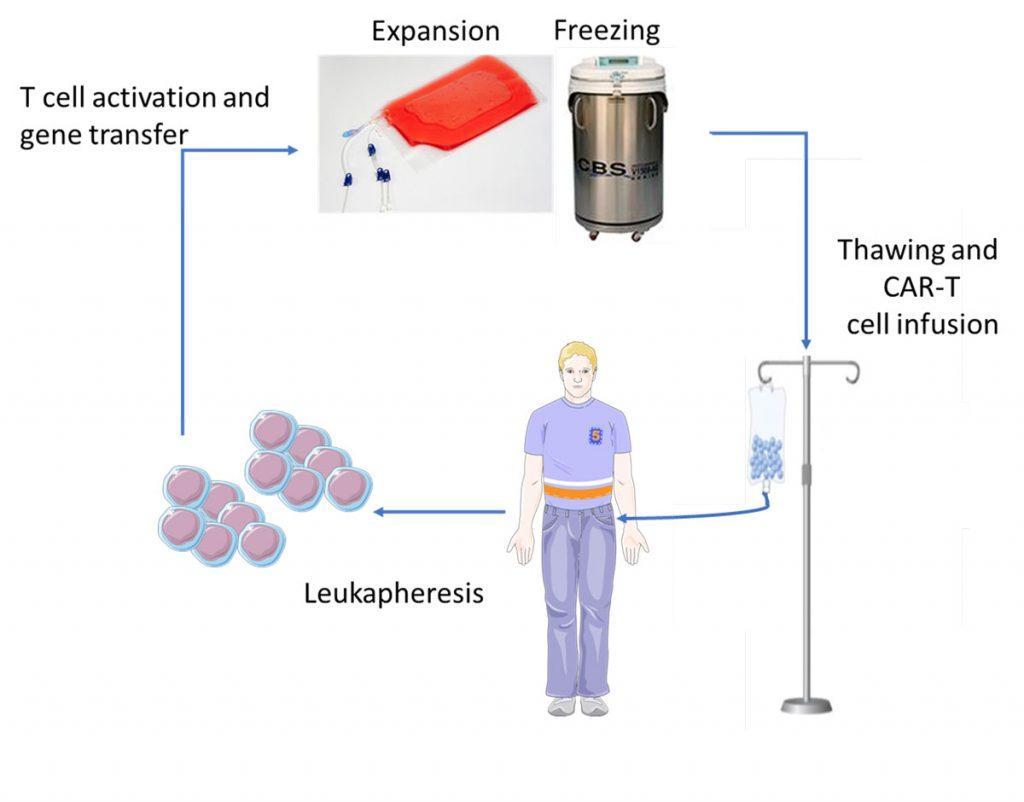 As CAR-T cells as of today is an autologous therapy, patients are not exposed to a risk of graft-versus-host disease that may occur after allogeneic hematopoietic stem cell transplantation.  However, CAR-T cell treated patients are at risk of other side effects:

The cytokine release syndrome (CRS) is an acute systemic inflammatory response that can be triggered by T cell-engaging immunotherapies such as anti-CD3 (OKT3), anti-CD20 (rituximab), anti-CD52 (alemtuzumab), CD3/CD19 bispecific antibody (blinatumomab) and anti-PD-1 (nivolumab). The incidence of CRS after CAR-T cell therapy is variable from 30 to 80%, with a higher risk in patients with the highest tumor burden4. CRS may be accompanied with a variety of symptoms and its severity may range from isolated fever to life-threatening organ failure. It occurs within 1 to 14 days after infusion (Figure 4). During CRS, massive amounts of effector cytokines are released, such as interleukin-6, interferon-gamma (IFNγ), interleukin-2 and tumor necrosis factor-alpha (TNFα). These cytokines may originate from the CAR-T cells themselves but also from activated macrophages. Angiopoietin-2 and von Willebrand factor, which are biomarkers of endothelial activation, may also be increased during severe CRS and cause coagulopathy. Laboratory markers are elevated: ferritin, C-reactive protein (Figure 5), IL-6, IFNγ and correlate with clinical severity.

Given that CRS is an emergency requiring immediate specialized care, the patient should be made aware of the different possible symptoms that may occur. Besides treating specific symptoms, management of CRS includes lowering the immune response while not compromising efficacy against cancer. According to the severity grading of CRS (Figure 6) 4,5, it may require supportive care, corticosteroids or anti-cytokine therapy. Grade ≥ 2 CRS justifies IL-6 targeted therapy with tocilizumab (monoclonal anti-IL-6 receptor antibody) or siltuximab (monoclonal anti-IL-6 antibody). ROACTEMRA™ (tocilizumab) is an immunosuppressive agent used for treating rheumatic diseases and has been granted approval for the treatment of CRS in adults and children. Tocilizumab prevents IL-6 binding to both cell-associated and soluble IL-6 receptor. IL-6 blockade by tocilizumab is effective at reversing CRS without inhibiting the efficacy of CD19 CAR-T cells.

Figure 4: Typical timeline for a patient undergoing CAR T-cell immunotherapy. After leukapheresis to isolate T cells, CAR-T cells are manufactured (2-3 weeks). CAR-T cells proliferate in vivo for 2 weeks after infusion (blue line) then start to decline. Patients are closely monitored for cytokine release syndrome (CRS) and neurotoxicity during the first weeks after infusion. Persistence of CAR-T cells in the long term is patient-dependent. When CAR-T cells do not persist, normal B cell reappear in the blood and patients are at risk of relapse of their malignancy. 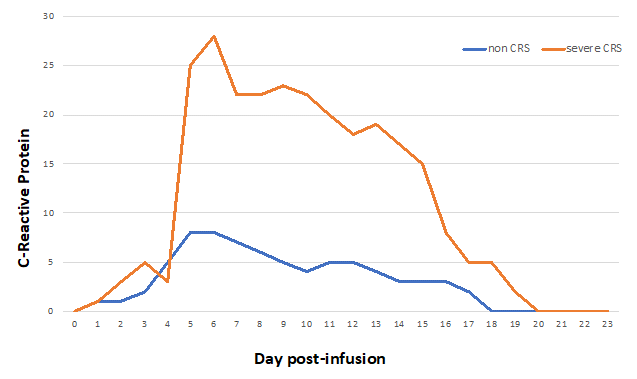 Figure 5: Example of C-reactive protein kinetics after CAR T-cell infusion in case of cytokine release syndrome (CRS) or not. 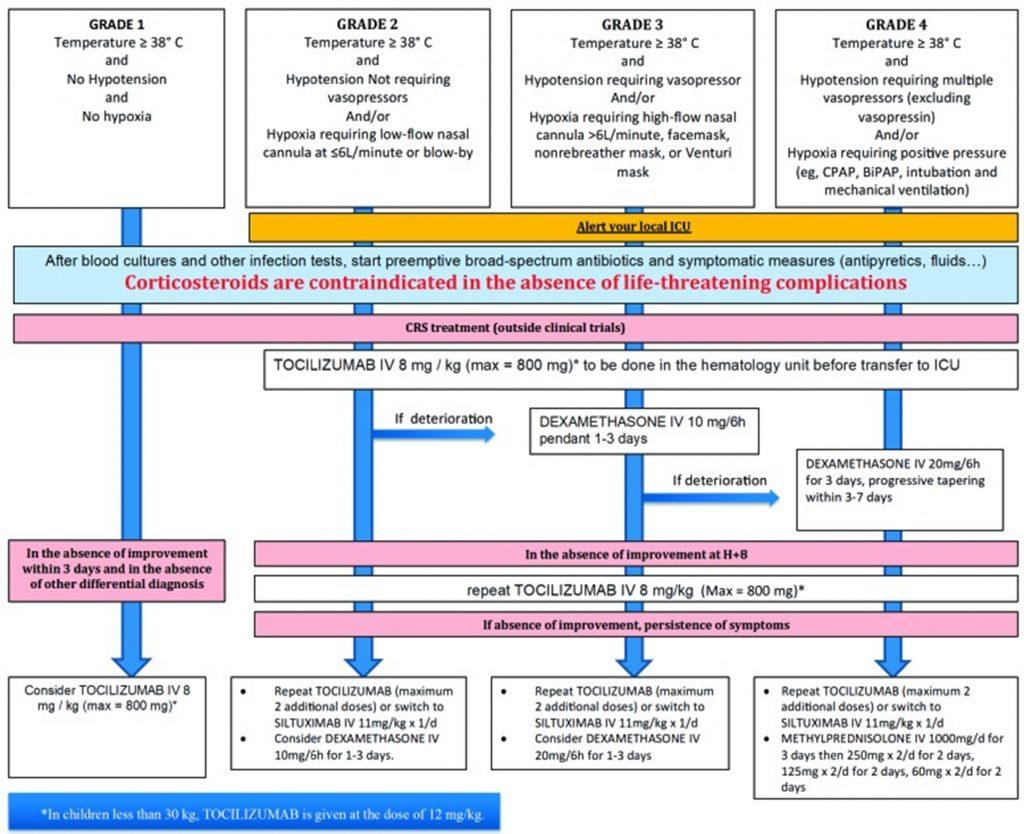 Figure 6: CRS grading scale and management guidance according to European Society for Blood and Marrow Transplantation.5

In the intensive care unit, Norberto received 8 mg/kg of tocilizumab intravenously over 1 hour. He was discharged to the department of hematology for surveillance after 2 days, and from the hospital at day 20 after CAR-T cell infusion.

The acute episode of CRS was resolved after tocilizumab treatment. One year later, flow cytometry did not detect CAR-T cells in his blood but molecular biology (PCR) evidenced persistence of circulating CAR-T cells. Norberto is still in complete remission of leukemia; he has no detectable B cells and receives a preventive treatment by intravenous immunoglobulins. He is doing very well.

What is the main difference between conventional T cells and CAR-T cells regarding the recognition of their cognate antigen?

Recognition of antigen by conventional T cells is HLA-restricted, in contrast to CAR-T cells that recognize native membrane antigen independently of HLA.

How are CAR-T cells produced?

CAR-T cells are T cells that have been genetically-engineered by use of a viral vector (gamma-retroviral for YESCARTA™ and TECARTUS™, lentiviral for KYMRIAH™) so as to express a CAR molecule.

What is the main cytokine responsible for the cytokine release syndrome (CRS) after CAR-T cell therapy?

What is the main biological drug used to treat the CRS after CAR-T cell therapy?

Tocilizumab, a therapeutic antibody directed to the receptor of interleukin-6 (IL-6)