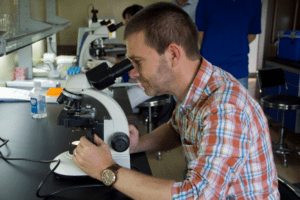 Prof. Magez is a Belgian Professor of immunology, who focuses on parasite-immunology. He currently leads his research teams based at the Ghent University Global Campus in Incheon, South Korea and the Free University of Brussel, Belgium. For the past 30 years he has conducted research on the immunology of Trypanosomiasis. Here, he shares his experience and passion with young immunologists.

When was your first contact with African trypanosomiasis? While starting my MSc thesis. The department of Immunology offered a research topic investigating T cell suppression induced by Trypanosome. By that time, I knew “something” about malaria, but nothing about sleeping sickness. So, I thought it would be interesting to learn something new.

What attracted you to the Immunology of African trypanosomiasis? When I started to work on Trypanosomes, I just realized there was a lot of unanswered questions, and even a lot of questions that apparently had not been addressed (thought of) at all. So it looked like an open field that would welcome a lot of hard-core investigative basic immunology research. Interestingly, while my initial task was to investigate the role of the inflammatory cytokine TNF in immunosuppression, I never got to the point of doing this. This is because when I started to look at this cytokine, I quickly realized it had a direct detrimental role on the parasite and this role was totally unknown and had never been described. So, from there, we first had to discover how TNF was induced, and next, what it would do to the parasite. After that, we started to look at the effect on the immune system. Every time we answered one question, three more questions came up. Hence, almost 30 years after I started my research, I still keep running into more questions every day.

What is your opinion about the possibility of African trypanosomiasis vaccine ? I think the chances of ever finding a vaccine that offers long-term sterile protection and that can deliver a memory recall response during infection are extremely small. My guess is that if anything ever will come to the market as a useful vaccine, it is not going to be in the next 25 years. In fact, I do not believe we will ever have a commercial vaccine that will offer long-term broad protection against trypanosomes under field conditions, but I hope one day someone will prove that I was wrong.

What are the landmark contributions of your group to this field of Science? The discovery that the inflammatory cytokine TNF is a major player in the control of Trypanosomiasis, and the finding that the Variant surface glycoprotein of the parasite is both involved in induction of TNF as well as binding and uptake of the cytokine. In addition, the finding of the B cell killing mechanisms has given unique visibility to our group.

What discoveries has your team made on the impact of trypanosomiasis on B cells? Trypanosomes kill many different B cell populations and prevents the development of mature B cells during infection. That is what allows them to live extracellular in the blood and the lymphatics. This is not a hostile environment for these parasites, but it is a place which they have made their home. In order to live comfortably, they have to modulate the environment and because they have acquired this B cell inhibitory capacity through evolution, they are one of the few parasites that do not bother about hiding from the immune system. They also have developed ways to prevent recognition by antibodies (antigenic variation) and they can cleave antibodies from their surface if these immune molecules bind. Finally, they can block complement mediated lysis, so they stop one of the main functional killing mechanisms of antibodies. In the end, the only thing B cells can do is help to clear damaged and dying parasites from the circulation but the B cell compartment is too weak to clear the viable parasite population from the circulation.

What is your advice for African aspiring to be immunologists? Accept that in science there is no room for compromise. If you miss a control in your experiment, and you over-interpret your results, you shoot yourself in the foot and in the end, you will never be respected in the community as a true and valuable colleague. That is not just for African immunologists of course, but it is very important for people working in hard working conditions not to be tempted by shortcuts to keep up with those that have more means, you cannot win that way. Also, collaborations are very important, but one has to think very well how to approach these. Too many African colleagues have accepted a role as ‘sample provider’. This will ensure you a personal favorable position but it brings very little back to the community.

What would you say to young scientists in general? Dream, and try to chase your dreams. If science is not a 110% occupation, look for something else that you love more, but if science is what you are willing to wake up with and go to sleep with, then go for it. It’s like art. An artist cannot pretend to be interested or pretend not to be creative. You can improve your techniques, knowledge and skills, your network etc. but you cannot be an artist if you are not. I strongly believe that true scientists are like true artists, You need an eternal load of curiosity and creativity, and if you have that, you have to do everything possible to use your gift.

What is your take home on the fight against African trypanosomiasis ? It will be extremely difficulty to eradicate this diseases because it is a zoonosis, that means there is an animal reservoir that carries human parasites. But at this moment we are not even talking about eradication, we are in a situation where animal Trypanosomiasis is becoming more and more prevalent in an ever growing habitat. The term ‘African’ is very misleading here. We have Trypanosomosis on every continent where humans live, and the trypanosome adapts itself to new transmission hosts so it can colonize more hosts. Scientists will not stop this. The only people who can stop this is the people who are in charge of managing the lands and the countries where Trypanosomosis kills livestock and people.

But here is the problem: while we have tools for treatment and diagnosis that work, it is usually very poor people that truly suffer because of Trypanosomiasis. These people have no political weight, so our system of political accountability does not work in the countries where we should be fighting the disease. One example is counterfeit drugs that are flooding the local markets in rural Africa. They sometimes out-compete the real drug 10/1 so local farmers can hardly get access to real help. One can only wonder who profits from allowing this situation to take place, because somewhere in the pipeline, there are people that earn money on causing misery in the community. The recent success in the fight against Human African Trypanosomiasis has unfortunately been attributed to non-African donors who have made funds available to fight the battle. Interestingly, it is a battle that is much cheaper to fight than many other battles that are being contested in the human African trypanosomiasis endemic areas. So why is it not a local priority?

Hence, where scientist can help is to try and make tools to fight trypanosomiasis that are very simple and cheap, so that local communities can use them with minimal support from outside.