Figure 1. Genetic map of the MHC regions. This map has been simplified to demonstrate organizational themes within the MHC. There are more than 200 genes within these regions. [Bellanti, JA (Ed). Immunology IV: Clinical Applications in Health and Disease. I Care Press, Bethesda, MD, 2012]

Figure 2. MHC-I and MHC-II molecules have a very similar structure. In each case, a cleft or groove is formed that cradles the pep-tide. The charge characteristics of the groove determine which peptides can be presented. [Bellanti, JA (Ed). Immunology IV: Clinical Applications in Health and Disease. I Care Press, Bethesda, MD, 2012] 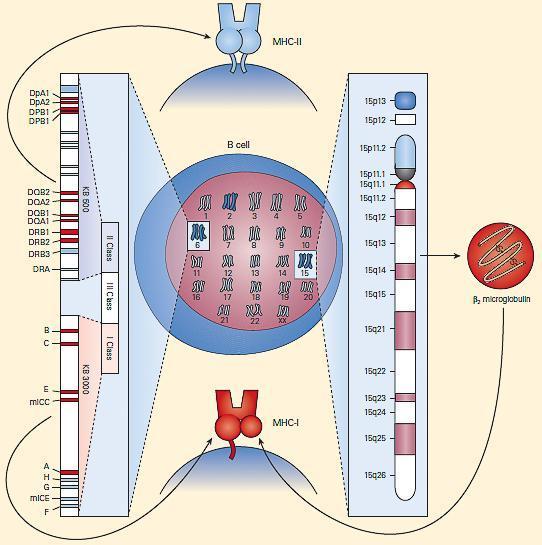 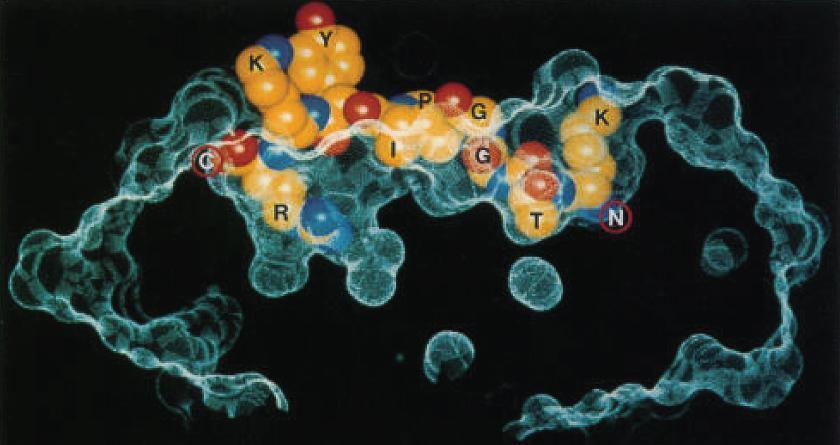 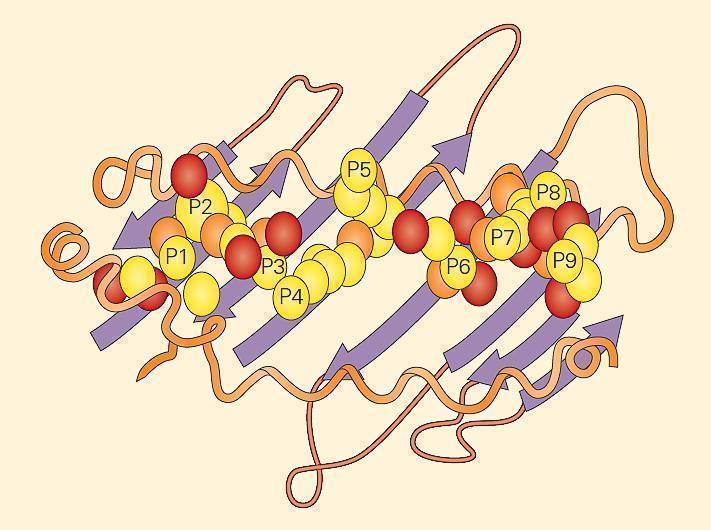 Figure 5. An example of a peptide held within an MHC-II groove. The fit of the peptide within the groove is very specific. The MHC-II molecule cleft is made up of a noncovalent association between the a1 and b1 domains that bind the peptide through multiple van der Waals forces and hydrogen bonds. The a1 and b1 domains are shown lying on a sheet of eight antiparallel b strands. The folding of the a1 and b1 domains creates a long cleft or groove that is the site at which peptide antigens bind to the MHC-II molecule and are presented to the CD4 lymphocyte. [Bellanti, JA (Ed). Immunology IV: Clinical Applications in Health and Disease. I Care Press, Bethesda, MD, 2012] 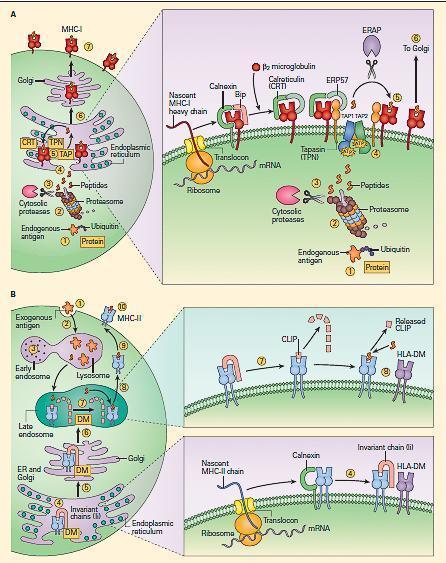 Figure 6. Peptide loading of MHC-I and MHC-II molecules. Panel A: shows the synthesis and peptide loading of MHC-I through the endogenous pathway. Endogenous proteins (e.g., a self-protein or a viral protein) synthesized in the cytoplasm are modified initially by ubiquitin (1), following which they are processed by the proteasomes (2). After trimming by cytosolic proteases (3), the peptides enter the endoplasmic reticulum via the TAP 1 and TAP 2 transporters (4). The MHC-I alpha chain, which is initially formed as a linear peptide in the ER, is then folded with the help of several chaperones (calnexin, calreticulin [CRT]). Binding immunoglobulin protein (BiP) and endoplasmic reticulum protein 57 (ERP57), during which the b2 microglobulin is added to the alpha chain, complete the synthesis of the complete MHC-I molecule (right inset in panel A). The complex is held together by tapasin (TPN), which facilitates transfer of the peptide to the antigen-binding cleft (5). The peptide-loaded MHC-I complex is then transferred to the Golgi (6) and then transported to the surface of the cell (7). Panel B: Shows the uptake of protein and peptide loading of MHC-II through the exogenous pathway. Exogenous proteins are taken up (1) and processed in the early endosomal compartment (2) and cleaved into peptides by cathepsins and other acid proteases (3). MHC-II molecules are formed in the endoplasmic reticulum with the help of the chaperone calnexin (4) and are held ready by the invariant chain (li); the complex is later fused with the HLA-DM (DM) (right lower inset in panel B). After passage of the li-loaded MHC-II-DM complex through the Golgi (5) into the late endosomes (6), the invariant chain is cleaved by acid proteases, leaving a residual peptide referred to as the class II-associated invariant chain peptide (CLIP) (7) in the MHC-II cleft (right upper inset in panel B). The HLA-DM facilitates the insertion of the peptide in the MHC-II cleft replacing CLIP (8). The MHC molecule loaded with peptide is transported (9) and expressed on the cell surface (10). [Bellanti, JA (Ed). Immunology IV: Clinical Applications in Health and Disease. I Care Press, Bethesda, MD, 2012] 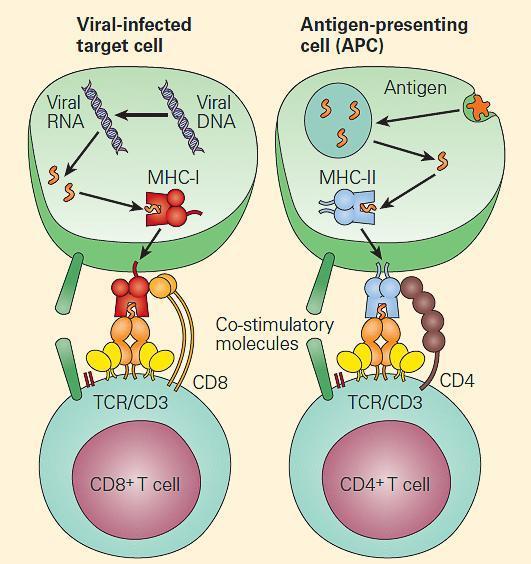 Rules that dictate the nomenclature of HLA: