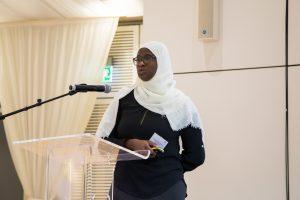 Our immunologist of the month is Fatoumatta Darboe, Post-doctoral researcher fellow at the Tuberculosis Immunology laboratory at the Medical Research Council (MRC) Unit The Gambia at London School of Health and Tropical Medicine (LSHTM). Dr Darboe is currently working on the Tuberculosis Sequel project, which aims to identify immune sequelae of TB, as well as in response to antibiotic therapy.

What is your research background and what led you to begin a career in immunology ?

I completed my doctoral studies at the University of Cape Town. My PhD thesis focused on transcriptomic signatures in patients co-infected with TB and HIV. My results showed that TB disease in people living with HIV could be diagnosed using a small gene signature, that has the potential to become a triage and point-of-care diagnostic test in clinical settings. Additionally, these signatures determine the risk of progression to TB disease which will allow for the provision of preventive therapy and is currently undergoing clinical tests as part of the CORTIS trial in South Africa.

I got into immunology probably by accident. I was interested in molecular biology and completed my undergraduate studies in Biology and Chemistry at the University of The Gambia in 2009. My first job after undergrad was in an immunology lab, specifically as an intern in the hepatitis group and then as a lab technician in the Infant Immunology Laboratory in 2010. During my time at MRC-Gambia, I developed an interest in the complexities behind disease and vaccine trials. I’ve been doing immunology since then. I was involved in several clinical trials including HIV and malaria vaccine trials and eventually rose to the position of Scientific Officer. In 2014, I completed my MPhil through the Open University (UK). My project focused on the non-specific effects of BCG vaccination on the immune response to other childhood vaccines in Gambian children.

What are your research interests and why? Tuberculosis, HIV, vaccines, biomarkers for diagnostics, immune profiling.

My primary research interest is TB immunology. TB is the leading cause of death due to a single infectious disease killing at least 30,00 people every week, with a quarter of the world’s population infected with Mycobacterium tuberculosis, the causative agent of TB. Little is known about protective immune responses for disease prevention, investigating this will help guide the development of therapeutic intervention strategies. HIV infection is a co-morbidity for TB and is known to be a major driver of TB disease, especially in Africa, accounting for a huge number of cases and deaths worldwide. Biomarkers and immune profiling are important components of TB research to develop new tools for diagnostics and disease prevention if we are to achieve the End TB strategy goals of TB elimination by 2050. With these interests, I hope to contribute to the elimination of TB disease.

How has your research contributed to better understanding your research area? I would like to think that my PhD work has contributed immensely to the understanding of the universal application of gene signature in the different stages of TB disease in people living with HIV. I showed that whole blood-based gene expression signatures can develop in HIV uninfected persons, can diagnose TB, predict recurrent TB disease and monitor treatment response in people living with HIV. We showed that plasma viral loads lower the specificity of gene expression signatures of TB especially those consisting mainly of Interferon stimulated genes. Our major findings are that whole blood transcriptome analysis would be ideal to discover novel biological pathways not confounded by HIV infection. Furthermore, it highlights the importance of accounting for HIV co-infection and plasma viral load levels when developing or validating signatures of active TB disease.

What awesome activities are you involved in outside of your research work? I’ve been involved in youth work in The Gambia. Currently, I’m a founding member of GAMHealth4Science, which focuses on teaching, mentorship and raising awareness of infectious diseases in The Gambia. We organise seminars and symposia on research methods, immunology, genetics and diagnostics for students from the University of The Gambia.

What advice do you have for young aspiring immunologists? Immunology is diverse and always evolving thus do not depend on textbooks but rather try to keep up to date with current literature. It might seem difficult and complex at first but things get easier once you go along.

Apart from your current research area, what other research fields would you like to contribute to in the near future? Cancer.