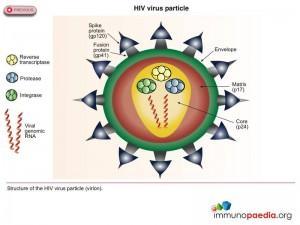 In order for HIV-1 to reproduce, it infects a CD4 bearing target cell. There are many cells throughout the body that express varying levels of CD4. Like all virus particles, HIV is not technically alive, but rather can be viewed as a piece of genetic material coated with a “protein and sugar body”. For HIV to remain alive and to reproduce, it needs to hi-jack cells of the infected person; those that co-express CD4 receptors and chemokine receptors.

HIV is a unique virus because it is able to convert RNA into DNA, which is the reverse direction (hence retrovirus) to the normal route of DNA to RNA. It can only do this once the genetic material from inside the “protein and sugar body” has been injected into the cytoplasm of a target cell. The converted DNA then hides itself in the genes of the infected cell. The HIV genetic material may lie dormant inside the infected cell or can be switched on when the CD4 cell becomes activated. Once activated, the cell divides – as does the HIV genetic material and new HIV particles are produced.

One of the hallmarks of HIV infection is the integration of viral genes into the infected persons genome which causes persistent infection because the immune system is unable to clear the virus.