Shaping of anti-tumor immunity in the tumor microenvironment

Professor Wolf H. Fridman is a Professor of Immunology at the Paris Descartes University Medical School in Paris, France. He received his MD and PhD degrees from the University of Paris. After 10 years in the laboratory headed by Jean Dausset, he created his own laboratory at the Cancer Research Centre in Villejuif in 1976, then moved to Institut Curie in 1983, and is presently the Director of the Cordeliers Research Centre, a joint research structure between INSERM, University Paris Descartes, and University Pierre et Marie Curie. He is also the Head of the Immunology Laboratory of European Hospital Georges Pompidou in Paris.

Since 2005, the studies of Jérôme Galon, Franck Pagès, and Wolf H. Fridman have changed the paradigm of host/cancer interactions by demonstrating that the “immune contexture”, considering the functionality, the location, and the density of the immune infiltrate in colorectal tumors, is the major prognostic factor for human cancers. These findings really open the way for immune-based tools for efficient prognosis and therapy of cancers.

Prof. WH Fridman is a co-author of 367 original peer-reviewed publications in journals which include Nature, Science, New England Journal of Medicine, Immunity Journal of Experimental Medicine, and many more. He is a world leader in the field of human tumor immunology as assessed by his recurrent invitations as a Symposium Speaker to AACR, Keystone, FASEB, and other top international meetings.

Tumours grow in a microenvironment in which malignant cells entertain intricated relations with stromal and immune cells Both T and B cell anti-tumour immunity are generated in Tertiary Lymphoid Structures adjacent to tumour beds. In situ generated immunity impacts patient’s prognosis and response to immunotherapy.

Prof. Fridman open his talk with a beautiful description of the tumour microenvironment and what this means for cancers. He further highlighted hour the adaptive immune response may predict clinical outcome (Figure 1). He further states how the immune response is better clinical predictor of tumour progression than actual tumour extension which was not well received when they postulated this in the beginning. However, today this statement holds true and has been proven extensively. This is elaborated on in further slides as he begins to describe how the immune response is a tool to be used to predict cancer outcomes as well as treatment options (Figure 2). 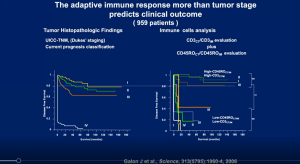 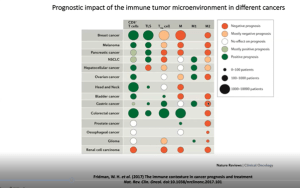 He then introduces the field of immune-checkpoint inhibitors which form an important pillar of modern immunotherapies. Highlighting work from his team he can show how B cells in addition to these inhibitors, play a key role in cancer progression and immunotherapy treatment success (Figure 3). Based on this, he continues to show data from a new study whereby researchers look to test a new drug involved in PD1 inhibition in patients with a specific type of soft-tissue sarcoma. The results were positive and beautifully described, in detail, by Prof. Fridman, with the regulatory T cell response seen in Figure 4. 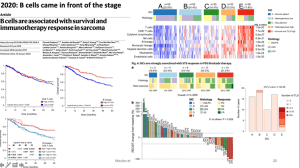 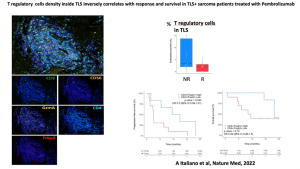 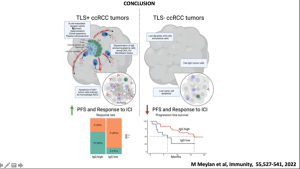