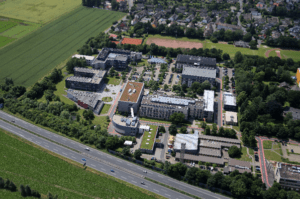 Our Immunologist of the Month is Prof. Dr. Luka Cicin-Sain, Professor at Hannover Medical School (MHH) and a member of the Centre for Individualized Infection Medicine (CIIM), a joint venture of MHH and the Helmholtz Centre for Infection Research (HZI) in Germany. A physician-scientist by training, Prof. Dr. Luka Cicin-Sain’s career took him from his native Croatia to Sweden, USA and finally Germany, where he is the leader of the Immune Aging and Chronic Infections Group in the HZI Vaccinology Department. His research team focuses on Cytomegaloviruses biology, infective mechanisms and host immune responses, and his discoveries were recently featured in the German media. He welcomed us to his lab located in the Science Campus Braunschweig-Süd, a research hub that includes the German Centre for Infection Research, the Fraunhofer Institute for Toxicology and Experimental Medicine and the German Collection of Microorganisms and Cell Cultures, where he told us about his work and gave us his valuable insight on science, career planning among other issues.

On Immunology, Cytomegaloviruses and Why Smiling at Monkeys is not good
Luka, what was your path to getting into Immunology? I graduated from the School of Medicine in Rijeka, Croatia in 1996. This was just after the war in my country and there were hundreds of unemployed physicians. I managed to get a teaching position in a basic subject at the university and from there I was offered a chance to go abroad on a stipend. Under the circumstances, it seemed like a smart career choice and I ended up in immunology. 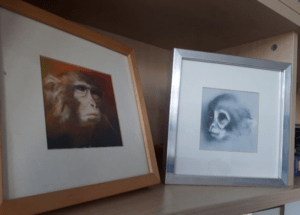 Part of your early research was conducted on Rhesus monkeys (Cicin Sain et al, PNAS 2007). Could you give us an insight on it is working with such animals? What is your view on the controversy behind the use of primate models in biomedical research? I worked a lot with rhesus samples, but I rarely went into the animal house. Most of the direct work with monkeys is done by highly specialized [veterinary] technicians. Nevertheless, I got sufficient training to understand that rhesus monkeys perceive it as a threat, if we look directly at them, and show them our teeth. The worst thing that you can do to a monkey is to smile at it. Please remember this next time you go to the zoo.
Animal work requires high ethical standards, especially when we deal with intelligent primates. The benefits must outweigh the burden that we impose on animals and we put a lot of effort to avoid any unnecessary pain or discomfort. Some say that this is not enough and that all animal experimental research should be banned. This is obviously wrong, because animal experiments allowed us to develop drugs and vaccines to cure, prevent and eradicate once deadly diseases. It is highly hypocritical to benefit from modern medicine while blasting the scientists who work on discovering new cures. It is also shortsighted and self-defeating.
Nevertheless, the pretence that experiments expose animals to unnecessary cruelty is a highly popular narrative that is mostly unquestioned by the media. It is also a cheap and easy way for politicians to score points with the constituents. The regulatory framework for experimental animal work in Europe has been recently changed to make it immensely more complicated, expensive and thus to discourage work with animals. The only winners of this policy are scientists working outside of Europe, who obtained a comparative advantage over European science.
European Union laws regarding animal experimentation are firmly anchored in the principle of the Three Rs, to Replace, Reduce and Refine the use of animals. Recently, a final opinion document on the need for non-human primates (NHP) experimentation was published. This expert committee concluded that “appropriate use of NHPs remains essential in some areas of biomedical and biological research” and that “a fixed deadline to phase out all use of NHP in the area of biomedical research was not possible”.

How did your interest in Vaccinology begin? I was working in viral immunology and we were about to publish a story where we deleted a lot of immune evasion genes from the CMV genome to attenuate the virus, while enhancing its immunogenicity. We thought that the easiest way to publish this story would be to present it as a novel approach to develop a CMV vaccine. I thought that the same backbone could be used to develop vaccines against other pathogens, using the attenuated CMV as the vector.
In this seminal paper authored by Prof. Cicin-Sain, the extensive deletion of 32 genes in mouse CMV (31.2 kb of genomic sequence) resulted in severe attenuation while maintaining immunogenicity and protection. Remarkably, this attenuation was maintained even in immunodeficient mice, showing the first steps towards a CMV vaccine strategy. This idea was further explored in an important review describing different proposals for CMV vaccine design.

What is your biggest contribution to science so far? I think that it is a string of papers on the common topic of memory inflation in CMV infection. A few years ago, I obtained a starting ERC grant to study the molecular mechanisms driving the prodigious immune response to CMV. We could identify the role of several factors in this phenomenon, including the gene expression (Dekhtiarenko et al. 2013), antigen processing by the proteasome (Dekhtiarenko et al. 2016), the route of infection (Oduro et al. 2016), but also the role of epitope avidity (Borkner et al. 2017). Very recently, we used all of this knowledge to refine an approach and develop a conceptual new vaccine vector eliciting resident T-cell responses against influenza (Zheng et al. 2019).
CMV infection induces powerful and sustained T-cell responses against a few selected immunodominant antigenic epitopes (Prof. Cicin-Sain’s article on Memory Inflation and Immune protection is a great resource). The mechanisms of such exceptional immunogenicity are not completely clear and are important for the development of CMV vaccines (See a review on the subject) as well for a better understanding of CMV immunopathology. The new Influenza vaccine was presented in the TV program “Hallo Niedersachsen” (in German), and in HZI news.

What is currently the most exciting project that you are working on? There are many of them, but I am really excited about our work on virus latency these days. The latent virus drives this strong response, and we have now the tools to identify which cells are stimulating the T-cells over a lifetime, inducing the strongest immune response known in medicine. This is also exciting because CMV infection is a highly common occurrence and affects most adult people worldwide.
Latency, defined as viral persistence in the absence of overt replication but associated with reactivation capability, is a cardinal feature of CMV infection. The understanding of CMV latency molecular determinants and cellular targets is not completely elucidated and is an area of intensive research. In this video, Prof. Cicin-Sain and Prof. Ulrich Kalinke, Executive Director of TWINCORE, explain part of the work done in that direction.

Personalized Medicine, The Next Big Thing and Some Advise
As part of the Centre for Individualized Infection Medicine, what are the most critical challenges and opportunities that this relatively young branch of research possesses? The concept of individualized medicine has been developed in oncology. Tumors vary in their genetics and personalized treatment offers a chance against tumors where off the shelf drugs may fail. The same approach to difficult infections of the vulnerable host may be applied in infection medicine, but most microorganisms grow and spread much faster than cancer. Nevertheless, I see a strong potential for personalized medicine of chronic infections, especially those that affect vulnerable hosts with cryptic predispositions.

Finally, what advice would you give to undergraduates interested in pursuing research in Immunology? Give your best to graduate with at least one high visibility paper. Two smaller papers are not the same as one single with a high profile. Go for a big lab that publishes in strong journals to do your PhD there, because this will expose you to a demanding environment that will challenge you and force you to grow. If you are unable to find a position with a well-established scientist, look for a young PI that is starting a lab and has published in such journals her/himself. This will give you better chances to publish well and further your career.