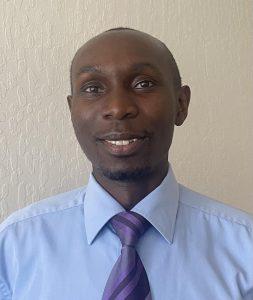 Provide a brief bio describing your current position, your educational journey (where you went to school and what degrees you attained), positions held, accolades and achievements

I am currently a Postdoctoral Scholar and Fellow with Prof. Joel Ernst at the University of California, San Francisco (UCSF) where the primary interest of my research is investigating the role of Mycobacterium tuberculosis (Mtb)-antigen specific human CD4 T cells in determining the outcome of Mtb infection.  Since there are over 4,000 Mtb proteins that the host has to mount a response to, we are tackling the challenge of identifying which antigens are presented to T cells that could generate protective immunity to TB by focusing on a set of rare distinct antigens that show evidence of evolutionary selection. These studies will contribute to the identification of correlates of protection and new vaccine targets against TB.

I belong to a number societies including Kenya Society for Immunology (KSI) which feeds into the continental federation (Federation of African Immunological Societies – FAIS) and the global body (International Union of Immunological Societies – IUIS),  Federation of Clinical Immunology Societies (FOCIS), the VALIDATE Network and I am a reviewer and author at Cochrane. I am currently a co-chair of the Early Career Researchers (ECR) Network of the Working Group on New TB Vaccines (WGNV).

I am grateful to have been recognized and supported by different organizations including scholarships, fellowships and Early Career Investigator Awards. In 2019 I was recognised by the Bill and Melinda Gates Foundation as a Grand Challenges Rising Star which was timely as I had just graduated with my PhD degree. In 2021 I was awarded the Helen Hay Whitney Foundation Fellowship, a prestigious and highly competitive award whose previous winners include several Nobel Prize laureates.

As someone that is still on the post-doctoral journey, what advice do you have for people that are just starting out or making a decision to do a post-doc?

For those who are making the decision, it is good to have a conversation with yourself if you want to go into a post-doc because this depends on the career path you want to pursue in future. Postdoc training is demanding and rewarding at the same time. So you have got to weigh the investment (time and opportunity costs) you put in whether it is worth those 3-5 years of your life.  For those starting up, roll up your sleeves and begin creating your brand. Identify the skills you need but still lack and concentrate on building those.

You pivoted into the world of TB research. What influenced your decision to do that and how has the transition been so far?

I wanted a deeper and better understanding of the human immune system. My question from very early on was: ‘Why do some people fall sick while others do not, yet they get exposed to more or less the same pathogens?’ The pathogenesis of TB disease turns out to be a good case in point. When you look at the numbers of people who succumb to TB, then there is also a sense of urgency in trying to solve that question. The transition was fine from a science perspective because every day is a learning day in science. But it was challenging operationally because I was used to doing animal model studies where you sit down and plan a full year’s experiment with set dates for every procedure. Working with clinical samples didn’t have that luxury. Study samples came when participants were consented, sometimes fast and furious!

What advice do you have for people that may want to pivot into a different line of research different from their background training?

It is good to look for something that makes you happy  and fulfils your desires, just don’t look for it in perpetuity. Once you identify your northern star, pack your stuff and follow it. There will be mistakes along the way, but learn from them. Talk to other people who have experience like your mentors and seniors in the field, they have insights that may not be available elsewhere. Ultimately the decision is yours, so tweak it when necessary and own it.

Care to share some of the other research projects you have been involved in prior to this?

Of course! I began my research career in  schistosomiasis (bilharzia) research under the mentorship of Prof. Thomas Kariuki at the Institute of Primate Research, Nairobi, Kenya. I worked on preclinical schistosomiasis vaccine testing in the baboon model; schistosomiasis-malaria coinfection studies and development of novel diagnostic targets or schistosomiasis. All these projects were anchored on immunology (which is why my transition to TB was not challenging on one front) and partly parasitology. Schistosomiasis remains a major neglected tropical disease in need of sensitive diagnostic tools, better broad acting drugs and no vaccine available yet. I keep tabs with research progress on these themes to remain informed.

What impact do you feel your research work on TB  has made so far when it comes to our understanding of infectious diseases?

For studies related to the development of better vaccines against TB, we identified features of human T cells unique to the site of disease, the lungs, that were missing in circulation or present at much lower proportions suggesting that they could be missed by exclusively studying the peripheral blood, and that location matters. Vaccination strategies will have to favour the generation of such tissue specific features of immune cells. Our recent findings point to a fact that is important but has not been extensively explored in TB research; that responses to distinct antigens determine the characteristics of responding T cells and that immunodominant antigens do not necessarily generate protective immunity. Then there is the appreciation that immune responses are just part of the puzzle; the organ systems are multiconnected so it is worth paying attention to how other processes like metabolism affect the immune system. In a broader sense, immunology can be viewed as a tool for the control infectious diseases and tumours to advance diagnosis, therapeutics and vaccinations. The COVID-19 pandemic is the best example of how immunology knowledge can be used to respond to challenges of disease outbreaks.

Feel free to share any recent and favourite publications of yours that people can have a look at to know more about your work so far.

My work is primarily focused on Th17 cell immunity to TB and also keenly pursuing interests in the roles of donor unrestricted T cells (DURTS) specifically gd T cells in TB and other infections like malaria and HIV. My most cherished paper is a review article we did in 2018 (PMID: 29506583) for two reasons: 1) It is my first, first author paper and 2) the way I ‘resurrected’ the manuscript while in the middle of my PhD research working on a totally different problem. I think it showed determination and resilience that goes without saying as the key pillars needed to stay in this field. That paper will be the first to be framed in the Ogongo wall of fame!

You are one of the people involved in the Working Group on New TB Vaccines (WGNV) under the Stop TB Partnership. What can you tell us about WGNV?

WGNV was established in 2001 and is one of the nine Working groups of the Stop TB Partnership. The purpose of the WGNV is to facilitate the development of new, more effective TB vaccines through collaboration, cooperation and consensus; and most importantly, to support the objectives for TB vaccine R&D in the Global Plan to End TB. The WGNV is an informal network of stakeholders engaged in all aspects of TB vaccine research & development (R&D) and from all constituencies , including academics, product developers, clinicians, advocates, funders, policymakers and the affected communities. The membership is open to anyone who is interested in being engaged in TB vaccine R&D. Additional information, including how to become a member can be found here: https://newtbvaccines.org

If early career researchers (ECRs) want to be involved in WGNV or know more about it, where can they find out more about it? Who can they contact? Any links to websites or social media pages that you can let us know about?

The Early Career Research (ECR) Network is an informal network of people engaged or interested in TB vaccine R&D who identify as an ECR and/or support the advancement of ECRs. The purpose of the ECR Network under the larger WGNV is to provide resources, support, and networking opportunities for ECRs. The ECR Network is open to members of the WGNV who identify as an ECR. The ECR network is also open to  senior researchers who want to support ECRs and contribute to its activities. WGNV recognizes that many of our colleagues in TB vaccine R&D are interested in supporting ECRs and helping them to advance their careers. New members are welcome to join the ECR network using this link:  https://newtbvaccines.org/join/

Follow us on our social media pages where we share important and emerging updates on TB vaccines:

You are currently based in USA but still have ties to research groups back home in Kenya. What advice do you have for people that are away from home but want to still contribute to research work that is going on there?

Keep the networks created while still back home active, reach out and be reachable as well. It is more demanding because you typically get to work for extended hours due to time difference. Also make a deliberate effort to seek new networking opportunities and be ready for disappointments along the way. Not all the emails you send out will be acknowledged but don’t give up if there is a premium you put on your scientific contributions back home. I believe it is a worthwhile thing to do. There are some funding opportunities that require a participating institute to be located in a country within the LMIC block and such networks come in handy if they already existed and frees your space to concentrate on the scientific component of the proposal.

In general, how have you managed to keep ties with your friends as well as collaborators that are in different countries?

Thanks to virtual platforms, I manage to have meeting regularly to discuss projects and also attend webinars that are common among us. For friends outside research, it is becoming more challenging but at least for them we don’t schedule formally, unless we want to go down memory lane which needs time.

Having lived in both Durban, South Africa and now in San Francisco, what are the top 3 things you have enjoyed or come to love about both places that you think other people should also give a try?