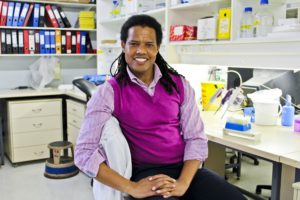 Mohlopheni spoke to the Immunopaedia team about Tuberculosis immunology and the role of granulomas in the disease.

Why is tuberculosis (TB) still such a a big health problem in developing countries? TB is potentially all over the world but the highest prevalence is in the developing world for a variety of reasons. Recently, the TB problem has been largely compounded by HIV co-infection as well as the emergence of drug resistant strains of TB such as MDR and XDR TB. Let us also not forget the social factors that contribute to the spread of TB such as living conditions. South Africa, which has one of the highest TB prevalences in the world, is a mining hub where people work in underground, crowded, low-ventilated conditions and live in hostel arrangements that can make the spread of the bacteria easier. Health policies also influence how the disease is tackled from country to country.

How does the immune system fight TB infection? Typically, when the bacterium that causes TB (Mycobacterium tuberculosis) is in the lung, Th1 responses predominantly attack it. The Th1 response is characterised by T cells producing cytokines such as interferon-gamma (IFNγ). IFNγ activates macrophages which then attempt to kill the bacteria by releasing substances such as nitric oxide and anti-microbial peptides. Macrophages also work to kill the bacteria by engulfing them and forming phagosome-lysosome complexes. Within the lung itself, there is a containment of the bacteria by immune structures known as granulomas. Intact, solid granulomas are aggregates of immune cells that contain the bacteria.

How does TB evade the immune response? Mycobacterium tuberculosis (Mtb) is able to subvert killing effects of the various arms of the immune response. In our research, we are interested in a gene complex expressed on the cell wall that allows the bacterium to survive. These genes are only essential when the pathogen is exposed to immune related stress conditions. Upon knocking-out those genes, the bacterium becomes disarmed in its ability to survive the immune system. In addition, Mtb accesses nutrients such as tryptophan from macrophages. CD4 T cells try to overcome this by starving the macrophages of tryptophan through an IDO. To counter-act this effect, Mtb expresses genes that enables it to synthesize its own tryptophan. Mtb also has an evasion mechanism which limits phagosome-lysosome fusion and therefore the bacteria can survive well within non-acidic vacoules within macrophages

What is the role of granulomas in TB infection? This is still a very exciting area of research as a lot is still not known about the role of granulomas in TB infection. Granulomas can be seen as structures that contain the Mtb and help limit bacterial dissemination in the lung; provided they remain intact, compact and not dissociating. Others argue that granulomas themselves form another evasion strategy of the bacteria. The bacteria will still be able to survive in the middle of the granuloma and can continue accessing its nutrients.

How has your research contributed to the treatment and/or prevention of TB? My research focuses on helping to develop host-directed therapies by looking at granuloma progression. As mentioned, granulomas can be intact and contain bacteria at their centres but if they are dissociating and forming caseum and cavities, they actually lead to dissemination of bacteria. So what we want to do is limit the dissociation of these granulomas by looking at genes which are associated with the progression itself. Having this information we can inhibit this with a “re-purposed drug” or host-directed therapies. In essence, if you limit the pathogenesis and progression of granuloma dissociation you can keep the bacteria at the centres and come with first-line drugs to target the bacteria that is contained. Combining these first-line drugs and host-directed therapies is known as adjunctive host-directed therapies and this is where our interest lies. We are interested in a number of crucial pathways including arachidonic acid and some kinase pathways.

I am also very interested in “science that works beyond the lab”; science that is concerned with societal impact, for example, how science can be used to influence policy and having dialogues about how our science affects the people on the ground. I am an Africanist at heart and I believe that problems that are African must be solved by people in Africa. Africa is capable of doing that with the proper support, relevant funding schemes and infrastructure. I believe we can use science to drive local solutions. By the time I retire, my dream is to train at least one PhD student from each country in sub-Saharan Africa and have a model where they go back and train more people in their countries; focusing on research that will impact their local communities.

In Africa we have something called Next Einstein Forum which recruited their first cohort of 15 scientists from all over Africa for 2015-2017 and I am one of them. What has been fulfilling  for me has been traveling to other African countries and seeing the enthusiasm among fellow Africans in Science. Rwanda is definitely a country to look out for in the future as a major hub of science innovation!

Advice to young immunologists: There are always challenges that you will face in science. My role model, Wieland Gevers, told me to “remember things will be difficult on your path to the top. That is actually normal and in fact character-building even though it doesn’t seem so at the time. The key thing is to have faith in your special abilities and your star that has been guiding you through the path”. So if your star is your own passion and you are connecting that to the desire to provide solutions to the field of science, there is nothing that will let you down.

If I wasn’t an immunologist I would be:  a historian. I feel very connected to history and would love to combine my love of science and history one day. Maybe I will start a field of “historical science”!