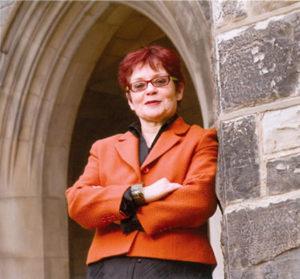 Michelle Letarte is Senior Scientist Emeritus at the Hospital for Sick Children in Toronto, Canada. She studied towards a BSc at l’Université Laval and PhD at the University of Ottawa. Michelle took up a post-doctoral fellowship in the Biochemistry Department at the University of Oxford working with Nobel Laureate Professor Rodney Porter. She set up her first laboratory in 1975 at the Ontario Cancer Institute in Toronto and subsequently led a laboratory at the Hospital for Sick Children. Michelle is passionate about educating and mentoring immunology students which she does through her role in the International Union of Immunological Societies Education Committee.

Michelle took time to talk the Immunopaedia team about her research on the role of endoglin (CD105) in Hereditary Hemorrhagic Telangiectasia type 1 disorder.

What is your research interest? While producing monoclonal antibodies to childhood acute lymphoblastic leukemia, we identified several surface glycoproteins including a novel one that we named endoglin. This protein is expressed primarily in vascular endothelial cells and was classified as the endothelial antigen CD105. Endoglin is also present on mesenchymal and hematopoietic stem cells, on activated macrophages and fibroblasts and on syncytiotrophoblast. We cloned and sequenced human and mouse endoglin and discovered that it was a co-receptor for ligands of the TGF-beta superfamily.

What is Hereditary Hemorrhagic Telangiectasia? In a collaborative study, we demonstrated that endoglin was the gene mutated in a vascular disorder called Hereditary Hemorrhagic Telangiectasia type 1 (HHT1), which is associated with arteriovenous malformations. Another gene, ACVRL1, a type I receptor of the TGF-beta superfamily, also expressed preferentially in endothelial cells, is responsible for HHT2. Endoglin and ACVRL1 both bind BMP9 with high affinity and this is probably the pathway altered in HHT, a disorder that affects 1 in 10,000 people worldwide and can lead to hemorrhages and strokes. In HHT1 patients, pulmonary arteriovenous malformations will occur in about 50% of patients; however they can be treated by embolization. Frequent and abundant nosebleeds are a major problem of HHT patients, which affect their quality of life and are not easy to treat.

How has your research contributed to better understanding the condition and helping people with the condition? Our research led to the development of a molecular diagnosis for HHT and to the determination of haploinsufficiency as the underlying mechanism of disease. We found close to 200 Endoglin and ACVRL1 mutations. We generated endoglin knock-out embryos, which die at mid-gestation of vascular and heart defects. We also demonstrated that the endoglin heterozygous mouse serves as a model of HHT1, reproducing all symptoms of disease in a strain-dependent manner. This model allowed us to show that endoglin normally associates with endothelial NO synthase and that this enzyme is uncoupled in HHT, giving rise to superoxide rather than NO and causing endothelial dysfunction and impairing myogenic response. Administration of the anti-oxidant Tempol to young endoglin heterozygous mice prevented the generation of the lung vascular phenotype, as did treatment with antibodies to VEGF.

What do you think still needs to be done to further our knowledge in treating HHT? Future studies are needed to elucidate the pathways affected in HHT and the effects of anti-oxidants and anti-angiogenic compounds in patients. I have been a member of the HHT International Foundation for 20 years and one of our mandates is to inform physicians, scientists and patients around the world about this rare disease, how to recognize it and how to treat it.

What other immunological activities are you involved in? I had the privilege to serve as Councilor, Vice-President, President and Past-President of the Canadian Society of Immunology (CSI). This led to a nomination and election as Councilor for the International Union of Immunologists (IUIS). I was then appointed Chair of the IUIS Education Committee in 2006 and will complete my mandate in 2017. The major achievement of our committee has been the establishment of our own brand of IUIS courses, aimed at teaching Immunology in the 4 corners of Africa and Latin America.

In the last 2 years, we have held courses in Columbia, South Africa, Tunisia, Mexico, and Gambia and the next ones will be in Ethiopia, Brazil and South Africa. An online Immunopaedia module is specifically designed for each of the IUIS courses to prepare the students to the very interactive sessions that follow. It has been a privilege to work with graduate students in the Dept of Immunology in Toronto, across Canada through CSI and around the developing world through IUIS.