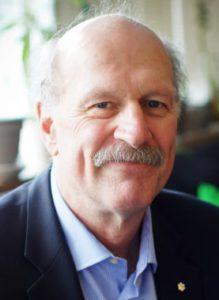 Bob Hancock is the Director of the Centre for Microbial Diseases and Immunity Research (CMDR) and a professor at the University of British Columbia. Prof Hancock and his laboratory focus on new therapeutic strategies and antibiotic resistance. Along with numerous other awards, he has received the Prix Galien (Highest Award for Canadian Pharmaceutical Research and Innovation) and the Killam Prize (Canada Council’s prize for Health Research) for his work.

We spoke to Prof Hancock about the threat of antibiotic resistance and his work on finding alternative treatments.

Research Interest: My research interests include small cationic peptides as novel antimicrobials and modulators of innate immunity, the development of novel (alternatives to antibiotics) treatments for antibiotic resistant infections, the systems biology of innate immunity, inflammatory diseases and Pseudomonas aeruginosa, and antibiotic uptake and resistance.

What is antibiotic resistance, and what problems could arise from it? Antibiotics are the single most successful medical intervention in human history. In addition to being critical for preventing and treating life-threatening infections, a lack of effective antibiotics would lead to difficulties with major surgeries, cytotoxic therapy, transplantations and early-term births, and even minor injuries could become infected and deadly. Thus the inexorable and concerning increase in multi-drug resistance to antibiotics in the face of a fairly dry pipeline for new antibiotics has caused great concern for public health officials and the general public, and the UN recently declared it “the biggest threat to modern medicine”. Two major strategic reports, the 2015 US National Plan and the UK’s 2016 O’Neill Report, considered solutions and both indicated the potential of alternative strategies to treat infections.

In Sept. 2016, all 193 UN member countries signed a declaration that antimicrobial resistance was “the biggest threat to modern medicine”. The problem is even worse when all causes of therapeutic failure are taken into account, including influential situations such as the lack of a supportive immune response and “adaptive” antibiotic resistance (dependent on growth conditions). Thus sepsis, an immune dysfunction caused by infection, annually kills 5M people worldwide (5.5% of all Canadian deaths). Sepsis is not always considered an antibiotic resistance issue but antibiotics are the front-line treatment, so the ~30% death rate reflects antibiotic failure. Similarly, biofilm infections represent 65% of all infections (US CDC), but are exceptionally difficult to treat due to high level adaptive resistance, the lack of drugs tailored to such infections and the inefficiency of immune responses against bacterial biofilms. Furthermore, deliberate suppression of immunity (e.g. cytotoxic cancer therapies) and hereditary/induced diseases that perturb anti-infective immunity make antibiotic therapy especially challenging.

If no new game-changing solutions arise within the next 30 years it has been suggested that infections will be the major cause of deaths on the planet by 2050, up from number 3 cause at present.

Compounding this issue is the dismal success rate of conventional antimicrobial drug discovery, despite the genomics era that has revealed the genetic content of >89,000 bacteria. Indeed we have not seen a single truly novel, game-changing antibiotic discovered in >30 years, despite billions of dollars of R&D funding, making it critical to develop novel strategies for treating infections.

How has your lab helped us understand the mechanism of action of antibiotics? In our early days as a lab we defined how antibiotics are taken up across the outer membranes of Gram negative bacteria (porins, self promoted uptake) which are considered by many as the most threatening set of pathogens with burgeoning resistance issues. Since the dawn of the genomics era, we also have helped to define the mechanisms of so-called adaptive resistance, which is phenotypic resistance dependent on the environmental conditions of organisms. Thus adaptive resistance is triggered by in vivo growth states and we have provided evidence that this common form of resistance is mediated by changes in the expression of multiple genes that influence resistance/susceptibility.

What work needs to be done in order to overcome antibiotic resistance? Due to the dismal success of modern antibiotic discovery, in my opinion we must pursue alternatives to antibiotics. These include Therapeutic Antibodies; Vaccines; Probiotics/microbiota approaches; Wild Type and Engineered bacteriophages and Lysins; Immune Stimulation; and Antimicrobial peptides including Innate Defence Regulators and Anti-biofilm Peptides. Such treatments can be used as stand alone therapies (e.g. in agriculture) or as adjuncts to conventional antibiotic treatment. We are working in many of these areas but in particular we are developing broad spectrum immunomodulatory innate defence regulator peptides and anti-biofilm peptides. Intriguingly these are not affected by current resistance mechanisms and address the above mentioned areas where antibiotic failure is a huge issue especially adaptive immunity.

Currently, what aspects of antibiotic resistance are important, but poorly understood? Adaptive resistance is the most complex since it cannot be revealed by sequencing organisms, being a change in gene expression of resistance genes, and involves multiple resistance genes. However genomic methods (e.g. RNA-Seq) are starting to make inroads. We also need to understand the reasons why drugs do not work in situations like sepsis and suppressed immunity.

What are the latest advances in the field of antibiotic resistance and uptake? This field has not moved enormously in the last few years. We now understand the internal architecture of porins (water-filled channels that mediate antibiotic uptake across the outer membrane). We are also increasingly appreciating the importance of efflux as being synergistic with reduced antibiotic uptake and moving to devise strategies to both increase outer membrane permeability and reduce efflux, both of which make organisms more susceptible to antibiotics.