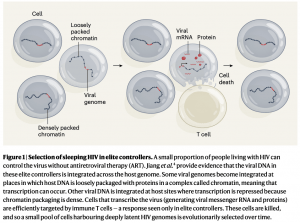 Access to antiretroviral treatment regardless of CD4 count has improved the health status of many HIV+ individuals. ART can result in a “functional cure”, the inability to detect viral copies in the blood of HIV individuals, however cessation of ART usual results in the resurgence of viremia. A very small proportion (< 0.5%) of HIV infected individuals can control viral replication without ART treatment. Understanding immunological and viral features associated with this “clinical phenotype” could guide the development of interventions that aim to induce functional cure without ART.

This article focuses on recent virological findings by Jiang et al., that conducted a comparative investigation of the viral reservoirs of elite controllers* and individuals with ART-induced functional cure. Authors demonstrated that the quality of viral reservoirs is potentially more important than the quantity of viral reservoir. They showed that elite controllers have higher proportions of “nearly” intact proviral DNA than individuals with functional cure. Further, proviral DNA in elite controllers was more likely “to be integrated in non-protein-coding regions of the genome, …in regions of repetitive stretches of DNA at chromosomal structures called centromeres… and regions associated with transcriptional repression” than pro-viral DNA in individuals with functional cure. Additionally, cytotoxic lymphocytes from elite controls had a higher proportion of wild-type clade B epitope specificities that were shared consensus sequence as intact proviral sequences.

These findings present evidence for the potential utility of the “‘block and lock’ mechanism of viral control, which is defined by silencing of proviral gene expression through chromosomal integration into repressive chromatin locations.” They also “propose that the distinct reservoir configuration in elite controllers is not related to altered preferences for integration site locations during acute HIV-1 infection in elite controllers, but instead represents the result of cell-mediated immune selection forces that preferentially eliminate proviral sequences that are more permissive to viral transcription, in a process that we suggest referring to as the ‘autologous shock and kill’ mechanism.”