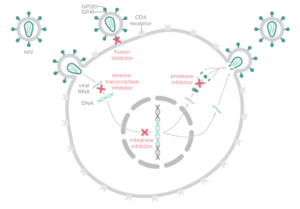 One of the obstacles in curing HIV is that the virus forms reservoirs which cannot be infiltrated by antiretroviral drugs. These reservoirs contain replication-competent forms of the virus. These reservoir viruses eventually replicate and lead to AIDS after drug failure.

Studies have shown that these reservoirs are highly stable entities with half-lives of approximately 44 months. The researchers, led by John Mellors, investigated whether clonal expansion was possible in the cells containing these HIV reservoirs.

To do this, they searched for identical HIV genomes in the reservoirs using an assay known as a viral outgrowth assay.  They also used single-genome sequencing to isolate proviral DNA or cell-associated RNA.

6/8 participants were found to have identical HIV RNA sequences obtained from different outgrowth cultures. 1 participant out of the other two remaining participants had identical partial sequences ( as the full genome was not sequenced).

These data show that clonal expansion does take place in cells that contain HIV reservoirs and may be an important driver of HIV persistence through reservoirs. It may be useful to target this mechanism when designing a therapy for HIV cure.