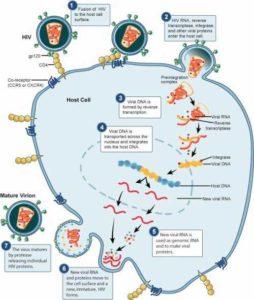 Antiretroviral therapy (ART) has greatly transformed management of the HIV epidemic, from being a terminal illness leading to AIDS, to a manageable chronic disease. ART has been shown to reduce viral loads to undetectable levels, resulting in lower risk of HIV transmission. In spite of this, a cure for HIV is still needed. One of the major obstacles in the development of a cure, is the persistence of the HIV reservoir. To date CD4+ T cells are the only cell population proven to be the cellular reservoir of HIV. Identifying markers of the HIV-1+ reservoir would facilitate targeted design of an HIV cure that aims at clearing the HIV reservoir.

Badia et al. observed that CD32 expression in non-specific stimulated CD4 T cells from HIV infected and uninfected individuals is highly correlated with the expression of the activation marker HLA-DR and to lesser extent CD69. They also showed that expression of CD32 increased in response to in vitro HIV stimulation, and  phenotypic CD32 expression was not associated with preferential in vitro HIV infection. Finally, they showed that in 6 out of the 10 HIV+ individuals studied, the HIV-reservoir was proportionally higher in CD32- compared to CD32+ CD4 T cells, and no difference was observed between replication competent viruses from CD32- and CD32+ CD4 T cells.

In summary, the study highlighted doe not support the recent finding by Descours et al., stating that CD32 is marker of HIV reservoir, instead CD32 is a marker of activation. The exact role CD32 plays in establishing the HIV reservoir requires further studies.

Article:  Badia et al., CD32 expression is associated to T-cell activation and is not a marker of the HIV-1 reservoir. Nature Communication.