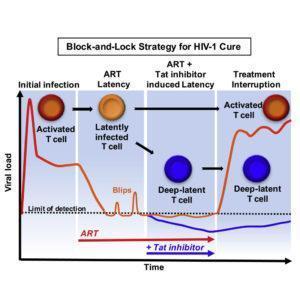 Currently, there is only one known person who has been cured of HIV. New strategies must be implemented to develop an affordable, accessible cure for the virus. Researchers have identified a Tat-inhibiting drug Didehydro-Cortistatin A (dCA) which is capable of inhibiting HIV transcription and reactivation of latent virus. Using this drug to “block” HIV re-activation and and “lock” latent reservoirs may be the strategy needed to functionally cure HIV.

One of the biggest challenges in curing HIV is that the virus latently infects cells including CD4 T cells. Antiretroviral therapy (ART) is unable to effectively penetrate these latent reservoirs and upon treatment interruption, the reservoirs are re-activated and replication-competent virus emerges. The researchers from The Scripps Research Institute previously identified a Tat-inhibitor, dCA, which drove expression of HIV-1 genes into persistent latent states. They hypothesised that using dCA could promote a state of durable latency in HIV-infected individuals and therefore inhibit the reactivation of these latent reservoirs, “locking” them in deep latency.

In vitro, the researchers investigated the long term effects of dCA exposure on viral rebound after the treatment interruption. They found that viral rebound was still inhibited 2-5 days after dCA treatment interruption. Rebound was inhibited in these cells even in the presence of robust T cell receptor signalling and protein kinase C. The researchers also found that dCA-treated cells had higher inhibition of RNA polymerase II recruitment to the HIV genome which means that less viral transcription was taking place.

Using a humanized bone marrow-liver-thymus HIV-infected mouse model, the team tested the in vivo efficacy of the drug in maintaining HIV-1 latency. The virus in the mice was first suppressed by ART and then they received dCA for 2 weeks. This resulted in a one-log reduction in HIV RNA in the tissues. Giving the mice dCA and ART at the same time for 4 weeks resulted in a significant delay in viral rebound for up to 19 days after treatment interruption.

In summary, this study provides evidence that the “block-and-lock” approach may work in providing a functional cure for HIV. Use of Tat-inhibitor dCA significantly inhibited viral transcription and was able to block viral reactivation in the latent reservoirs where the virus was effectively locked in. This study is the first to use an in vivo HIV model to demonstrate that a drug can inhibit viral rebound after treatment interruption.