In what has been a significant finding with regards to the development of new therapeutics for inflammatory skin diseases such as atopic dermatitis (AD) and psoriasis (PSO), researchers have identified a new cell type contributing to these disorders. In addition, the roles of antigen-presenting cells in the development of inflammatory skin diseases remain unclear. The present study revealed the functions of each antigen-presenting cell subset, which is significant in furthering our understanding of the pathogenesis of AD and PSO.

Chronic inflammatory skin diseases such as AD and PSO are the most common type of dermatological conditions. These disorders are characterized by the presence of activated T cell subtypes which secrete pro-inflammatory cytokines. This T cell–mediated immune dysregulation is central to the pathogenesis of a wide range of inflammatory skin diseases. The elucidation of the mechanisms regulating and modulating T cell activation and priming in healthy and diseased skin provides the foundation on which to develop effective therapeutics and treatments for these diseases. Dendritic cells (DCs) are professional antigen presenting cells (APCs) that act as the link between innate and adaptive immunity and play a significant role in driving T cell–mediated cutaneous responses. Human DCs can be divided into two main functional groups based on their heterogenity i.e. classical DCs (cDCs) and plasmacytoid DCs (pDCs). While pDCs exhibit more innate functions restricted to the detection of viral infections and the production of type I interferon, classical DCs include type 1 (cDC1) and type 2 (cDC2) subsets, which can detect different pathogens, produce specific cytokines, and present antigens to polarize naive CD4+ and CD8+ T cells.

In order to further our understanding of the role played by DCs and macrophages in chronic inflammatory skin disorders, Nakamizo, et al., made us of a combination of high-dimensional, single-cell protein and RNA expression analyses of human cutaneous APCs (some single-cell RNA-seq data shown in Figure 1). This was done in order to establish an unbiased immune profile of DCs and macrophages with the aim of describing their distinct molecular signatures and proportions in skin lesions of AD and PSO patients. (Interesting to read: Gut Inflammation Linked to a Debilitating Skin Condition) 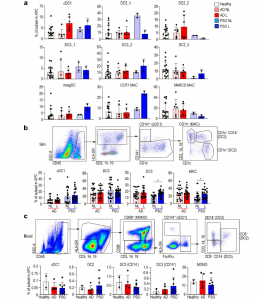 CD14+ DC and macrophage (MAC) subsets of skin and blood in healthy, AD, and PSO samples. (a) Bar graph of the percentage of each DC and macrophage subset in healthy, nonlesional (NL), and lesional (L) skin from integrated scRNA-seq data. (b and c) Flow-cytometric analysis of each DC and macrophage in (b) skin and (c) blood of healthy subjects and AD (14 skin and 5 blood) and PSO (16 skin and 8 blood) patients. Top: Dot plot of flow cytometry. Bottom: Bar graph of the percentage of each DC and macrophage sub-population. P values were obtained byWilcoxon matched-pairs signed-rank test (b) and Dunn’s multiple comparisons test (c). *, P ≤ 0.05. MAC, macrophage; MONO, monocyte. (Nakazimo, et al., 2021). In AD lesional skin, only cDC1s were relatively increased according to our scRNA-seq data, while in PSO, the proportions of cDC1s, CD14+ DC3s, and CCR1+ macrophages were relatively higher in lesional skin (Fig. 1 a). Because the scRNA-seq data were based on few patients, the researchers aimed to validate their observations and thus compared the frequencies of each subset in skin and blood using flow cytometry on additional patients (skin: 14 AD and 16 PSO; blood: 5 AD and 8 PSO). They found that the proportions of CD14+ DC3 and macrophages were higher in PSO lesional skin as compared with nonlesional skin (Fig. 1 b and supp. data). However, in AD, there was no difference in cell population abundance between nonlesional and lesional skin regions. Subsequently they compared the proportions of DC subsets and monocytes in the blood between AD and PSO patients and healthy subjects (supp. data), but there was no significant difference between these groups (Fig. 1 c). Therefore, measuring blood DC and monocyte subset proportions cannot be used as an indicator of PSO and AD disease activity. From this, the researchers were able to hone in on specific cell types for further analysis.

Through extension and deepening of their dataset using publicly available resources, in combination with immunolabeling of skin sections, they were able to identify IL15-expressing mature LAMP3+BIRC3+ DCs enriched in immunomodulatory molecules (mregDCs) and IL1B/IL23A-coexpressing CD14+ DC3s in diseased skin. The newly discovered subset of DCs in inflammatory skin diseases, mregDCs, have also been identified in other pathologies including cancer. They also reported that the mregDC number was increased in AD and PSO lesional skin, and that mregDCs were a major source of IL-15 among cutaneous APC. IL-15 is up-regulated in both AD and PSO skin: in PSO, IL-15, like IL-23A, stimulates the production of IL-17A by T cells and is significantly associated with exacerbation of both AD and PSO. Together, suggesting that by modulating mregDC activity may aid in regulating AD and PSO. There was also significant enrichment in the proportion of CD14+ DC3s in PSO lesional skin, co-expressing IL1B and IL23A, two cytokines essential for PSO pathogenesis.

CD14+ DC3s may be an important target, representing a novel therapeutic option in the treatment of PSO. Hopefully the findings of this study may lead to an improvement of existing and development of new treatments for chronic inflammatory skin diseases such as PSO and AD. Related articles and further reading on Immunopaedia: Understanding the skin phenotype of children with eczema and CD4+ T cell skin lesions.

“Our study comprehensively describes the molecular characteristics of macrophages and DC subsets in AD and PSO at single-cell resolution, and identifies CD14+ DC3s as potential promoters of inflammation in PSO.” (Nakamizo, et al., 2021).