Getting to the “bottom” of arthritis 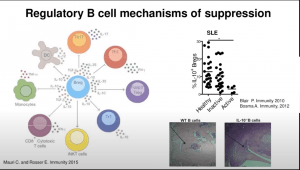 Regulatory B cells (Bregs) are immunosuppressive cells that contribute to the reduction of excessive inflammatory responses. Researchers have demonstrated that interaction between the gut microbiota and the innate immune system in the gut-associated lymphoid tissue (GALT) promotes the differentiation of immature B cells into B-regs. Mice depleted of endogenous bacteria following administration of broad-spectrum antibiotics do not develop arthritis or B-regs, 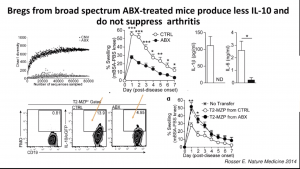 suggesting an intricate relationship between the microbiota, inflammation, and B-reg differentiation. These findings suggest a potential link between microbiota and B-regs, which could occur either (1) due to inflammatory signals induced by interaction with microbiota or (2) direct induced by microbial products by inflammatory. In a recent IUIS-Immunopaedia-Frontiers in Immunology webinar, Claudia Mauri (University College London, UK) discussed how microbial products induce B-regs and their relevance for arthritis pathology.

Murine models of arthritis have demonstrated that pathology is associated with a reduction of commensal bacteria and short-chain fatty acids such as butyrate compared to naïve mice, a similar finding also observed in humans. Using a murine model, Claudia Mauri demonstrated that suppression of arthritis pathology by butyrate supplementation is B-reg dependent and requires induction of B-regs via aryl-hydrocarbon receptor (AhR). She also showed that butyrate-supplementation prevents plasmablast and germinal centre differentiation. Is this process direct or indirect? Microbial analysis butyrate supplemented mice demonstrated an increase in bacteria that metabolise tryptophan, an amino acid involved in and leads to the production of serotonin, indole and kynurenine, and also activate AhR. Analysis of metabolic products in mice supplemented with butyrate demonstrated a significant increase in serotonin-derived metabolite 5-Hydroxyindole-3-acetic acid (5-HIAA). Further, she showed data that 5-HIAA activates B-regs via activation of AhR and suppressed arthritis pathology. 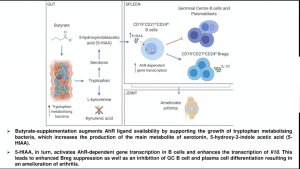 In summary, results presented by Claudia Mauri demonstrated a role of microbial metabolites in the suppression of arthritis pathology, thus providing evidence for the link between arthritis and the gut microbiota.