Tuberculosis (TB) caused by the intracellular pathogen mycobacterium tuberculosis (M. tb) is one of the most contagious diseases. Up to a quarter of the world’s population is estimated to be latently infected with M. tb (LTBI). Pediatric TB contributes significantly to worldwide TB infections but is difficult to diagnose due to insufficient detection methods (READ MORE).

Many biomarkers of pulmonary and extrapulmonary TB have already been identified with the help of mass spectroscopy since infection with M. tb causes significant changes in the energy and protein metabolism of the host. Druszczynska and colleagues now used targeted liquid chromatography-mass spectrometry (LC-MS/MS) to assess the levels of 30 small metabolites in the serum and M. tb antigen-stimulated blood cultures of active TB children (Figure 1). These were then compared with those of LTBI children, infectious non-mycobacterial pneumonia (NMP) children and controls without active infection. 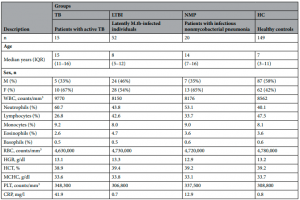 Comparison of the levels of metabolites between the groups revealed that serum leucine levels were significantly higher in the TB and LTBI groups, whereas the abundance of citrulline was significantly lower in these patients compared to the healthy control group. Further metabolites with significant differences included hydroxyproline, proline, valine, tyrosine, leucine, kynurenine, valine and neopterine. Using receiver operator characteristic (ROC) curves, area under the curve (AUC) and elastic-net logistic regression analysis, they identified serum leucine as the best discriminator of TB + LTBI versus healthy control + NMP. Unfortunately, the small sample size of the TB group (n = 15) did not allow for a selection of the most informative metabolites to discriminate this group against the others. Nevertheless, the obtained results are a proof of principle of the usefulness of metabolites in the diagnosis of TB in children.