SARS-CoV-2 and partial resistance to remdesivir

A recent study has demonstrated partial resistance of SARS-CoV-2 to the antiviral drug, remdesivir, in vitro.

The study by Stevens, et al., has highlighted the need to understand the mechanisms of resistance, monitor mutations and develop new combination therapies when dealing with COVID-19. Remdesivir has been used in some cases to treat COVID-19 and prevent severe disease, however, although few, there have been cases of remdesivir resistance clinical reported. Remdesivir was the first drug treatment for COVID-19 which is used to treat both hospitalised and non-admitted patients. The antiviral works by means of inhibiting replication of the SARS-CoV-2 viral RNA (READ MORE).

In this present study, the researchers demonstrated that through repeated and prolonged treatment of SARS-CoV-2 following several passages in vitro with remdesivir, SARS-CoV-2 was able to mutate and develop a means of replicating its genome, thereby bypassing the effects of remdesivir (Figure 1). 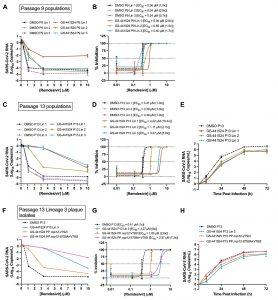 More studies would need to be conducted to fully elucidate all the mechanisms of resistance and to further develop new treatments in order to treat SARS-CoV-2 infection (READ MORE).