In a recent paper, researchers have found that CD8+ regulatory-like T cells release neuroprotective molecules in the brain following a stroke, which may limit inflammation and subsequent brain damage (Figure 1).  These protective effects were observed in ischemic stroke in mice. 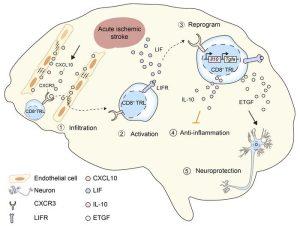 In this paper, the researchers described a subset of CD8+ regulatory-like T cells which act as the first phase/response to a stroke. These cells are found to migrate to the site of ischemic injury within 24 hours after a stroke in response to various hormonal signals. From there they release hormones and molecules involved in several neuroprotective functions. Importantly, the development of CD8+ TRLs as a stable treatment could provide an effective therapeutic for stroke treatment.

This paper described the process of which CD8+TRLs enter the brain much, which is faster than any other regulatory immune cells. Researchers reduced CD8+ TRLs from the bloodstream of mice whom had a stroke and found that the size of the brain region affected by ischemia expanded by 50% compared to animals whose CD8+TRL levels remained intact.

“In sum, our results suggest that the early infiltration of CD8+ TRLs naturally limits infarct expansion in the ischemic brain and that adoptive transfer of CD8+ TRLs offers a potentially novel immunotherapy for stroke. This study sheds further light on mechanisms underlying the reduction of acute ischemic brain injury by CD8+ TRLs and the resulting functional recovery, thereby improving our mechanistic understanding of immunomodulation of stroke outcomes and accelerating breakthroughs against an intractable brain disorder that has defied effective treatment.”