GET OUR MONTHLY NEWSLETTER
Immunopaedia > Breaking News > Can reprogramming CD8 T-cells contribute to a cure for a HIV?

Can reprogramming CD8 T-cells contribute to a cure for a HIV?

CD8+ T-cells form an integral part of the immune response to viral infections. For diseases states such as HIV1, it is now appreciated how the fate or outcomes of CD8+ T-cells, as a result of the quality of priming received early after infection, can determine whether an individual is in position to control the infection, or succumb to disease.

Work has been done to show that they are indeed some very distinct differences between CD8+ T-cells in HIV-1 controllers (HICs) versus non-controllers. In line with this, the authors have gone on to identify signalling as well as metabolic pathways that look to play for a role in controlling HIV-1 and SIV and are therefore responsible for what we see in HICs. With this in mind, they went forward to hypothesize that reprogramming of CD8+ T-cells from non-controllers could lead to a boost in their antiviral immune response, as a result of their CD8+ T-cells exhibiting characteristics seen in natural controllers.

In the research work published in this paper, the authors evaluated the potential of CD8+ T cell reprogramming to induce stem-like properties in cells derived from non-controller individuals, through the manipulation of the TCF-1 and mTORC pathways.

The route taken to reprogram HIV-1 CD8+ T-cells from non-controllers involved inhibiting GSK3. BIO and TWS119 were the two molecules that we used as they are highly selective inhibitors of GSK3 and induce activation of the Wnt/β-catenin/TCF-1 pathway. The increased expression of TCF-1 is taken to be a characteristic of virus-specific CD8+ T cells in HIV-1 and SIV controllers as its presence is seen to promote CD8+ T cell stemness, which is associates with very good control of both viruses and tumours.

GSK3 inhibition lead CD8+ T-cells to exhibit characteristics that have been associated with natural HIV-1 control such as higher polyfunctionality, survival, capacity to expand, reduced dependency on mTORC1 and glucose, a better responsiveness to γ-chain cytokines, and a strong HIV-1–suppressive capacity.

Figure 1 would demonstrate one of these characteristics. Here they looked at the capacity of non-stimulated cells from non-controller individuals under ART to suppress HIV-1 infection of autologous CD4+ T cells in order to determine the antiviral potential of reprogrammed CD8+ T cells. IFN-γ+ CD8+ T cells, that had been reprogrammed had a sustained memory-like profile, with increased expression of CCR7 and a lowered expression of PD-1 and LAG-3 that are inhibitory receptors. 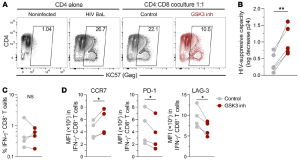 Figure 1: Reprogramming increases the HIV-1–suppressive capacity of CD8+ T cells: “HIV-1 BaL–superinfected CD4+ T cells from people with HIV were cultured alone or in the presence of autologous non-reprogrammed or reprogrammed CD8+ T cells. After 7 days, the levels of infection were measured by flow cytometry (KC57 anti-Gag antibody) or ELISA (p24 in culture supernatant). (A) Representative flow cytometric analysis of the frequency of infected CD4+ T cells (from a total of 4 donors). (B) HIV-suppressive capacity of non-reprogrammed and reprogrammed CD8+ T cells (log10 decrease of p24 levels in culture supernatant; n = 5 individuals, with the median of triplicates for each experiment). (C and D) The frequency of IFN-γ+ HIV-specific CD8+ T cells (C) and expression of CCR7, PD-1, and LAG-3 in HIV-specific CD8+ T cells (D) were measured after 7 days of coculturing. *P < 0.05 and **P < 0.01, by Wilcoxon test.”

Overall, the authors do report that “after reprogramming, virus-specific CD8+ T cells from non-controllers acquired phenotypic, transcriptional, metabolic, and functional attributes associated with natural control of HIV-1 infection. Our results shed light on the therapeutic potential of such CD8+ T cell reprogramming in the search for an HIV-1 cure”. They are especially optimistic that this could be a great intervention targeted at HIV-1 remission.

The authors note that CD8+ T cell reprogramming could be combined with other interventions in order to further enhance antiviral potential. An example would be with short-term IL-15 treatment. Figure 2 would be a graphical summary of the work carried out and represented in this paper. The authors also pointed out a commentary, Transforming dysfunctional CD8+ T cells into natural controller–like CD8+ T cells: can TCF-1 be the magic wand?,  that was written in response to the discoveries made from this research work. 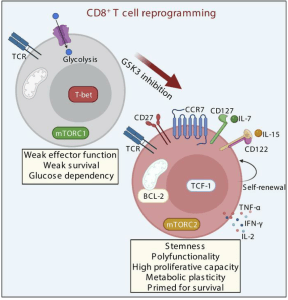