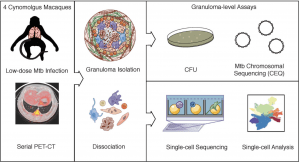 Study design: Cynomolgus macaques (n=4) were infected with a low-dose inoculum of Mtb (Erdman strain) and serial PET-CT scans were performed at 4, 8, and 10 weeks post-infection with the final scan used as a map for lesion identification at necropsy. Individual granulomas were excised and homogenized. CFU and CEQ assays were performed on all granulomas (top right) and 26 individual granulomas across 4 animals were randomly selected at necropsy for Seq-Well assays (bottom right). Source: Gideon et al., Pre-print

Tuberculosis (TB), second only to COVID-19, is one of the leading causes of death due to a single infectious agent. Approximately a quarter of the global population is estimated to have Mycobacterium tuberculosis infection (TB etiological agent). However, only 5-10% of infected individuals progress to disease. This suggests that there are mechanisms of protective immunity that we do not fully understand yet. On the 8th of March,  the IUIS-Immunopaedia-Frontiers webinar series hosted tuberculosis immunologist Dr JoAnne Flynn. In honour of World TB  Day on the 24th of March, we shall provide three summaries highlighting findings shared during Dr Flynn’s talk.

Dr Flynn began her talk with a brief overview of how M.tb infection can lead to the development of granulomas (structured organisation of cells that aim to contain M.tb replication). The majority of Dr Flynn research utilises non-human primate (NHPs) models, specifically cynomolgus (latent to active TB) and rhesus (almost always active TB) macaques, that represent the full spectrum of human TB infection and disease. In this summary, we shall focus on findings presented that relate to natural infection. 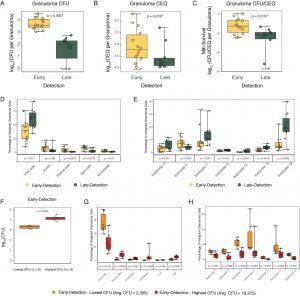