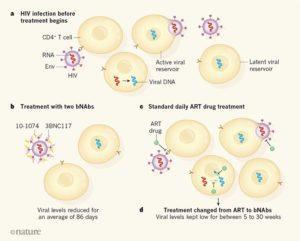 Targeting HIV. (a) When a person is infected with HIV, the protein Env on the viral surface can bind to receptors on immune cells called CD4+ T cells. This interaction enables the virus to enter the cell, undergo DNA synthesis using the viral RNA template, and become inserted into the host-cell genome. Cells that are actively making virus using these inserted copies of viral DNA are called the active viral reservoir, and virus particles are released from such cells after viral replication. However, some cells that have viral DNA insertions might be in a ‘dormant’ state that does not actively produce virus and instead forms what is known as the latent viral reservoir; these cells might give rise to virus production in the future. (b) Bar-On et al.  report the results of a clinical trial that tested whether the introduction of two antibodies, 3BNC117 and 10-1074, which are a type of antibody known as a broadly neutralizing antibody (bNAb), can lower the blood levels of HIV in people who haven’t received HIV treatment. The two antibodies bind to separate sites on Env, and prevent the virus from binding and infecting immune cells. (c) The standard treatment for HIV infection is known as antiretroviral therapy (ART), and consists of a daily dose of drugs that block steps in viral replication. (d) Mendoza et al. report a clinical trial that tested whether 3BNC117 and 10-1074 can lower virus levels in the bloodstream of people who temporarily stop receiving ART. The results of both studies are encouraging, indicating that the use of two bNAbs can lower virus levels for a time. (Source: Haigood Nature 2018)

Antiretroviral therapy (ART) has greatly improved the quality of life of HIV+ individuals. However, successful ART does not eradicate the HIV reservoir (HIV-infected cells harbouring integrated HIV provirus). As a result ART is a lifelong to treatment prevent to viral rebound. There are numerous on-going efforts to find an alternative to ART, as lifelong treatment can lead to undesirable side effects. One of these efforts, is the use of broadly-neutralising antibodies (bNAbs).

Clinical trials have tested the ability of HIV-bNAbs 3BNC117 or 10-1074 to reduce viremia during analytical treatment interruption (ATI). These studies showed that these bNAbs have the ability to maintain viral suppression, however treatment with a single bNAb was associated with emergence of Ab-resistant viral variants. Mendoza et al., aimed to determine if a combination of these bNAbs can maintain viral suppression during ATI in HIV-infected individuals. They conducted a Phase 1b trials where 11 ATI individuals were passively immunised with 3 doses of 3BNC117 and 10-1074 bNAbs at 30mg/kg three weeks apart. The first dose of bNAb therapy was 2 days before ATI, to ensure that circulating Abs were present when ATI was initiated.

Mendoza et al., did not observe any serious severe adverse events, indicating that the therapy was safe and well tolerated. Investigation of the viral competent cells from the viral reservoir (retrospectively) revealed that two individuals had virus resistant to either one of the bNAbs in the therapy. Due to this therapy induced viral suppression was not observed, indicating that activity of both antibodies is required to ensure viral suppressions (> 15 weeks), as observed in the 9 participants with Ab-sensitive viral reservoir.

Dual bNAb therapy was meant to reduce the chances of developing Ab-resistant viruses when viral rebound occurs. However, researchers detected 10-1074-resistant viruses upon viral rebound. This observation was attributed to lower half-life of 3BNC117, which resulted in detectable plasma levels 10-1074 only during the later phase of follow-up. Single circulation of 10-1074 is similar to monotherapy which then results in selection of 10-1074-resistant virus. Thus, to achieve optimal viral suppression and prevent development of viral resistance, researcher hypothesise that plasma levels of both virus should be greater than 10μg/ml.

In summary, Mendoza et al., demonstrated the potential utility of dual bNAb therapy in suppressing viral reservoir in avireamic individuals in the absence of ART. Their findings highlight the need for the further studies to determine the minimum level of plasma bNAb concentrations to prevent viral rebound.