GET OUR MONTHLY NEWSLETTER
Immunopaedia > Breaking News > Does the timing of granuloma formation affect TB control?

Does the timing of granuloma formation affect TB control?

Granuloma formation in the lungs is a well-documented hallmark of TB immunopathogenesis. In this paper, Gideon and colleagues demonstrate to us how diverse TB granulomas can be, not just between individuals, but within an individual.

In cytomegalovirus macaques, the authors examined the myriad of cell types and other elements surrounding granulomas to identify what drives TB persistence in some granulomas and the lack of immune containment in others (Figure 1). Being able to discover what mechanisms are behind both these events could help TB scientists determine other areas to focus on in the pursuit of new targets that have the potential to be used for the development of host-directed therapies and vaccines. 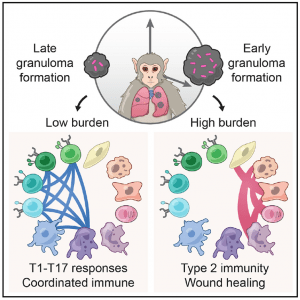 From data that was generated using a combination of longitudinal PET-CT, bacterial burden assays, and scRNA-seq techniques, Gideon et al established that type 2 immunity and responses responsible for wound healing determined how high TB bacterial burden was within the granulomas.  These two immune responses, in a bid to preserve tissue in the lungs, end up creating an environment that favors the persistence of Mtb.

The main instigators of these responses associated with type 2 immunity and wound healing were mast cells. The authors demonstrated how mast cells were very abundant in most high-burden lesions, and were major producers of type 2 cytokines, especially IL4, IL5, and IL13.

On the other hand, granulomas that ended up being formed later on, after adaptive immune responses have properly kicked in, were seen to promote more successful control of bacterial burden. The major cell types associated with this response were type1, type17 and cytotoxic T cells. Type 1 and type 17 T-cells were noted to highly expanded in granulomas where there was active containment of TB burden.

When we think possible targets for host-directed therapy, knowing the appropriate immune response to upregulate is usually the main agenda, however, knowing what is detrimental as well could help us sharpen how these therapies could address very disruptive mechanisms when it comes to containment of TB disease. In line with this, the authors state that; “although more detailed studies on the roles of wound-healing responses and tissue remodelling in TB are indicated, these features could represent critical targets for host-directed therapies that need to not only enhance restrictive adaptive immune responses but also address the maladaptive features of microenvironments permissive to granuloma persistence”.