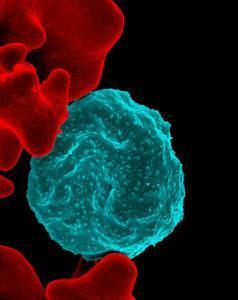 BCG is one of the first vaccines to be given to infants. Epidemiological studies have shown a protective effect of BCG against non-related infections, where BCG vaccination is associated with reduced infant mortality. Recent studies hypothesise that improved outcomes is due to BCG trained immunity, where BCG primes innate immune cells to confer a non-specific resistance to infection. In humans, one study has shown that BCG vaccination reduces viremia in individual vaccinated with live attenuated yellow fever vaccine (Arts et al., read our summary). However, there is limited research on the impact of BCG on malaria. Murine models have shown that BCG reduces parasitaemia in mice compared to controls. Researchers aimed to provide evidence of the protective effect of BCG on malaria outcomes in humans.

In summary, this study suggests that trained immunity induced by BCG vaccination, particularly activation of NK cells and monocytes, is associated with lower parasitaemia. However, the study was under-powered to demonstrate  significant difference in other immunological outcomes measured. Unfortunately, the study was designed to treat individuals as soon as parasitaemia was observed, thus researchers could not demonstrate the effect of BCG vaccination on self-resolving malaria immunity.