GET OUR MONTHLY NEWSLETTER
Immunopaedia > Breaking News > News 2018 > Have you heard of trained immunity?

Have you heard of trained immunity? 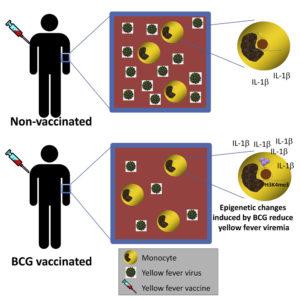 According to classical immunology, only the adaptive arm of immunity  (T and B cells) have the ability to confer immunological memory. However, understanding of immunology memory is being redefined to included de facto innate immune memory also known as trained immunity. Trained immunity is the non-specific resistance to infection that is conferred by innate immune cells. Mechanistic studies have attributed trained immunity to epigenetic re-programming that occurs when innate immune cells are activated by infection or vaccination (Netea et al.,  2016).  This epigenetic reprogramming results in enhanced inflammatory and antimicrobial properties in innate cells when encountered with secondary stimuli.

Bacillus Calmette-Guérin (BCG) is a live attenuated Mycobacterium bovis vaccine strain that protects against Tuberculosis and leprosy. BCG epidemiological studies have shown a protective effect of BCG against non-related infections, where BCG vaccination is associated with reduced infant mortality. Additionally, BCG has been demonstrated to slow tumour progression, when used as a therapeutic agent for bladder cancer. Non-specific effect of BCG has been attributed to induction of histone modifications and epigenetic programming of human monocytes at inflammatory cytokines TNF-α and IL-6 promoter sites.