The emergence of new variants of SARS-CoV-2 is a cause for concern due to the potential of these variants to evade vaccination and the host immune response. Therefore, there is an increased need to develop new treatments as well as new prophylaxis to combat the virus.

Researchers have demonstrated genomic similarities between an early coronavirus, SARS-CoV-1 and the current coronavirus strain dominating headlines, SARS-CoV-2. This has helped researchers better understand SARS-CoV-2. Interestingly, SARS-CoV-2 expresses a new protein from the gene, open reading frame 10 (ORF10). ORF10 functions to suppress the innate immune system. This gene in addition to another, ORF8, have been implicated in the pathogenesis of SARS-CoV-2, i.e. host immune response evasion, cytokine storm development and activation of the interleukin (IL)-17 pathway.

In a new study, Fernandes, et al., aimed to determine the function of ORF8 and ORF10 genes and SARS-CoV-2 Membrane (M) protein and there effect on apoptosis (Figure 1). They also looked at the effects of these genes and proteins on the innate immune response. What was interesting in this study was that they further investigated the effects of cannabidiol (CBD) on the expression of these genes (READ MORE). Previous studies have demonstrated the anti-inflammatory effects of CBD, the non-psychotropic phytoconstituent derived from Cannabis sativa. 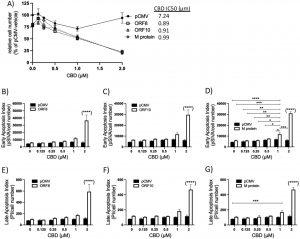 Figure 1: Effect of ORF8, ORF10, or M protein expression, with and without CBD treatment, on HEK293 cell number and apoptosis indexes. (A) Dose-dependent effects of CBD on the relative number of cells per well 24 h after transfection with control plasmid (pCMV), or plasmids expressing ORF8, ORF10, or M protein (n = 3–12). IC50 values for CBD concentration in combination with each group are shown. (B D) Dose-response effect to CBD on the early apoptosis index in HEK293 cells expressing pCMV or viral genes at 24 h. (E-G) Dose-response effect to CBD on the late apoptosis index in HEK293 cells transfected with control or viral plasmids. Apoptotic indexes were calculated by dividing the relative absorption of the respective marker by the number of cells per well. Apoptosis data were analyzed by 2-way ANOVA with Tukey’s post-hoc test, n = 3–9. Differences among groups are as indicated, *P < 0.05, **P < 0.01, ***P < 0.001, ****P < 0.0001, where (⁎⁎⁎⁎) denotes a significant difference (P < 0.0001) between cells treated with 2 μM CBD and transfected with a viral gene-encoding plasmid, and all other groups (Fernandes, et al., 2022).

In short, they showed that CBD improves the antiviral innate immune response with reference to the three genes, M protein, ORF8 and ORF10. They were also able to show the potential of CBD to enhance the antiviral response of cells in preparation for infection. Additionally, the researchers showed how CBD-treated HEK293 cells had a superior immune response to SARS-CoV-2 when compared to untreated HEK293 cells.

“Taken together, our results indicate that while expression of the SARS-CoV-2 genes ORF8, ORF10, and M protein alone fails to significantly induce apoptosis, or reduce cell numbers, and while treatment of cells with up to 2 μM CBD also does not affect these parameters, combinations of 2 μM CBD with these genes dramatically upregulates apoptosis and reduces cell numbers…The induction of Type II and Type III IFN, as well as OAS family member genes, may help explain the pro-apoptotic effect of CBD that was observed in cells expressing viral genes, and future work should investigate a causal role. In addition, the induction of these IFN and ISG by CBD in control cells may indicate a ‘priming’ effect on the innate immune system, better readying cells to respond to viral infection, which could help to explain the lower rates of COVID-19 in patients receiving high-dose CBD treatment.”