GET OUR MONTHLY NEWSLETTER
Immunopaedia > Breaking News > Can we use cannabinoids to block SARS-CoV-2 viral entry?

Can we use cannabinoids to block SARS-CoV-2 viral entry?

Hemp compounds identified through the utilisation of chemical screening techniques have shown the ability to prevent viral entry of SARS-CoV-2 in human cells.  Cannabis sativa, also known as hemp, is a well-researched and frequently used plant. It is a great source of fibre, feed and hemp extracts and compounds can be added to cosmetics, body lotions and several other products.

Van Breemen, et al., reported on a pair of cannabinoid acids, cannabigerolic acid (CBGA) and cannabidiolic acid (CBDA), that can bind to the SARS-CoV-2 spike protein, inhibiting/blocking a crucial element of the virus’s ability to infect a host cells (Figure 1). 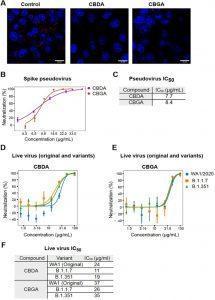 Using a mass spectrometry-based screening technique developed by the group, the laboratory was able to identify the two cannabinoid acids (Figure 2). Additionally, the were able to show that cannabigerolic acid and cannabidiolic acid prevented infection of human epithelial cells by SARS-CoV-2 spike protein subsequently leading to failed entry of SARS-CoV-2 into cells. What is important to remember is that the spike protein is the same target for COVID-19 vaccines and antibody therapy. 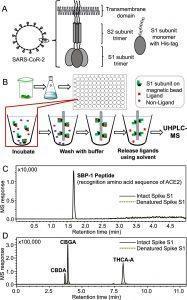 Figure 2: Affinity selection–mass spectrometric (AS-MS) discovery of natural ligands to the SARS-CoV-2 spike protein. (A) The spike protein of SARS-CoV-2 consists of trimers of a protein containing an S1 subunit, an S2 subunit, and a transmembrane domain. The S1 subunit binds to human ACE2 to initiate cell entry. Recombinant S1 containing a His-tag was immobilized on magnetic microbeads for affinity selection of ligands. (B) AS-MS was used to isolate and identify natural ligands to the spike protein S1 subunit. A magnetic probe retained the microbeads containing the S1 subunit and bound ligands, while unbound compounds were washed away. Ligands were released using organic solvent and then analyzed using UHPLC-MS. (C) During AS-MS, the SBP-1 peptide bound to immobilized S1 (equivalent to 0.17 μM) (positive control) but not to immobilized denatured S1 (negative control). (D) MagMASS was used for the affinity selection and identification of cannabinoid acids (0.10 μM each in this confirmatory chromatogram) as ligands from hemp extracts. Negative controls using denatured S1 showed no significant binding of cannabinoid acids (van Breeman, et al., 2022).

Being abundant in hemp and many hemp extracts, cannabinoid acids have a good safety profile in humans and contain no psychoactive compounds such as THC. The present study highlighted that the hemp compounds were equally effective against variants of SARS-CoV-2, including variant B.1.1.7, which was first detected in the United Kingdom, and variant B.1.351, first detected in South Africa (alpha and beta respectively).

SARS-CoV-2 is characterised by crown-like protrusions on its outer surface which comprise RNA strands that encode its four main structural proteins i.e. spike, envelope, membrane and nucleocapsid in addition to 16 non-structural proteins and several other proteins. To target these structures, being the receptor binding domain for human cell surface receptor ACE2, is a form of antiviral intervention as it may it some way effect viral infection and/or its replication cycle. Using compounds such as CBGA and CBDA to inhibit or block the virus-receptor interaction may be greatly beneficial in combatting the pandemic. What is of great benefit is that these compounds can be taken orally. It was also reported that there was minimal impact of the variant lineages on the effectiveness of CBDA and CBGA, which has major implications for future variants of concern.