GET OUR MONTHLY NEWSLETTER
Immunopaedia > Breaking News > Why is SARS-CoV-2 Omicron less severe than Delta?

Why is SARS-CoV-2 Omicron less severe than Delta?

The SARS-CoV-2 Omicron variant has been known to cause a less severe disease than the Delta variant despite its improved ability to evade the immune response and induced immune protection by vaccinations and previous infections. The reason why has eluded scientists until now.

A new study by Bojkova, et al., reported on the SARS-CoV-2 Omicron variant and why it is less efficient than the Delta variant at inhibiting/blocking the host cellular defense mechanism against viruses. This defense mechanism of interest is the “interferon response.” In addition, they have reported that several COVID-19 drugs and drug candidates are effective against the Omicron variant.

The present study on the Omicron variant has described that the variant is more sensitive to inhibition by the so-called interferon response (Figure 1). This may provide an explanation as to why this variant is less severe than previous variants. The researchers also highlighted using cell culture that the Omicron variant remained to be sensitive to eight of the most important antiviral drugs and drug candidates for the treatment of COVID-19 (Figure 1). This included EIDD-1931 (active metabolite of molnupiravir), ribavirin, remdesivir, favipravir, PF-07321332 (nirmatrelvir, active ingredient of paxlovid), nafamostat, camostat, and aprotinin. 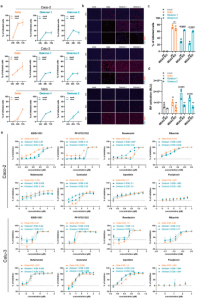 This study is the first to describe, why Omicron infections are less likely to cause severe disease. This study also presented some promising data for the future.