GET OUR MONTHLY NEWSLETTER
Immunopaedia > Breaking News > Why do people with the Dantu blood group have a lower risk of developing malaria?

Why do people with the Dantu blood group have a lower risk of developing malaria? 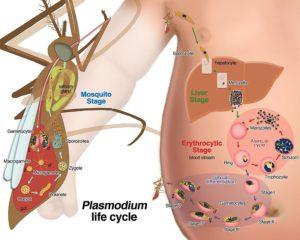 There are over 200 million cases of malaria globally with most cases occurring within the tropics of Asia, Africa, Central and South America. Not everyone exposed to the malaria parasite Plasmodium falciparum (and other plasmodium sp.) develop malaria. In some individuals, the presence of genetic polymorphism such as those causing sickle cell disease results in a protective phenotype which prevents the acquisition of malaria disease. We summarise a recent article which describes features associated with “blood group variant Dantu which provides 74% of protection against all forms of severe malaria”.

Upon infection malaria parasite first infects the liver (pre-erythrocytic stage) where they develop into merozoites which in turn infect red blood cells (RBC) (blood stage) and where they develop into either male and female gametocytes which are taken up by mosquitoes in a blood meal. Kariuki et al., demonstrate that individuals with Dantu blood groups express RBC surface proteins that play a role in parasite invasion into the RBC (e.g. CGYPA, GYOC, Band 3) at different levels as those with other blood group types. Further researchers demonstrated that RBCs from individuals with the Dantu blood group have a higher tension and resistance to changes in the RBC shape than non-Dantu RBC. This differential protein expression and RBC tension negatively impacts the ability of the malaria parasite to enter RBC of individuals with the Dantu blood group, thus protecting them from developing malaria.